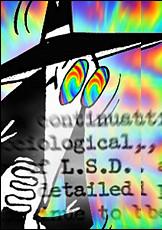 Posts : 12
Join date : 2019-01-18
Age : 66
Location : New Mexico
It is No Measure of Health to Be Well-Adjusted to a Profoundly Sick Society…
-Jiddu Krishnamurti
Best Wishes and Farewell from The AMOLW
When oldbeatnik approached The Arcane and Mischievous Order of Light Workers’ Council of Elders with the request to inject his great love for Mankind into its flow of consciousness, We acquiesced with a wink and a nod to his request, all the while recognizing it as The Folly of Youth. Though oldbeatnik, who is hardly old, has attained to the Master Degree of 434 in Arts and Repertoire, i.e. Enlightening with Entertainment, he is still, as you see, an Elder-In-Training. He is not yet privy to certain of The Order’s secrets and therefore ignorant to the extent of the dilemma Mankind has co-created for itself with the alien parasite-thought form and laughable nemesis of Our Order, The Archon.
There is not much for Us to add here in regard to what Mankind must do in order to overcome the mess it co-created for itself with The Laughable Archon. Oldbeatnik has already given you all the tools necessary for your salvation. A careful perusal and study of his offerings will reveal what the interested individual must do to rid himself of archonic parasites. Unfortunately, Mankind’s resolve for self-exploration and self-healing is not as intense as is oldbeatnik’s great love for Mankind.
Please look upon yourselves with favor. Humanity is not completely culpable for the current mess in which it finds itself. The thought-form parasites resident in all but an insignificant few are dastardly and sneaky little buggers.

There are many, many highly esteemed individuals within the archonic matrix who, for their own self-aggrandizement, are responsible for extending and prolonging Man’s current plight. Beware! They are not friends of Man! They are promoting the Archonic Agenda! A critical study of religious, political, social media, and new age guru personalities will help in discerning parasitic traits in yourself and culture-at-large.
Before We bid you farewell, here is a little history lesson from the AMOLW archives. These tidbits are only shared with members of The Order as they advance in The Degrees. Consider it a going away present. Going away for you, that is…
Excerpted from Liber Genetii Book One C1V1-13
Humanity is the result of a cobbling together of mRNA from one earth species and DNA from twelve carefully selected races from the local and extended Omniverse. The original intent of the geneticists responsible for fashioning humanity was to create an enhanced vessel for The Light.  They soon discovered that in order for this new species to thrive and propagate on the destination planet, genetic material from the planet needed to be included in its genetic makeup, thus creating a chimeric being.  After extensive studies of earth’s mammalian fauna, the geneticists opted to encode a single messenger RNA (mRNA) protein-coding gene from an ancient ancestor of the modern chimpanzee.  The thinking among these expert and adept scientists was that this was the least invasive addition to a hardy interstellar multimillion year-old gene pool. They were, to their chagrin, expertly and adeptly mistaken.  The mRNA sequence, in essence, betrayed the main Pleiades DNA sequence and in domino fashion, the other eleven genetic sequences fell in line. This is a general overview of a very complex and disappointing series of events the likes of which would not manifest until several thousand generations in the future. A full overview, including a complete history of the genetic heritages used in the experiment, is given in subsequent lectures in Liber Genetii Book Two.
Like much of Planet Earth’s true history, the aforementioned story is hidden in plain sight. The story of Humanity’s genetic genesis is encoded in the story of Jesus and The Twelve Apostles. A little critical thought and study will reveal the covert message within the Jesus Story.
Excerpted from Liber Circuitus Hominis
Man’s True Nature is as a follower of The Omniversal Cycles and no other thing. Modern Man is following everything but... The primate mRNA opened Man to the availability of thought-form parasites that exist at-large in all of Ceaseless Creation. These mostly benign creatures have little effect in almost the entire Omniverse as the intelligence quotient for advanced civilizations will not provide the food on which these parasites feed, that being Fear in all its forms. All evils that plague Mankind stem from these parasites. The most malevolent of these iniquities is the two-headed beast of religion and politics…
Unfortunately, We will go no further as the full course on Parasitic Exsanguination of Consciousness is given in The Advanced Degrees. However, there is enough food here for deep and meditative thought for any interested party.
Now, We must take our leave.
In the words of AMOLW Elder Emeritus Brother E.R. Murrow,
“Good Night! And Good Luck!