OUT OF MIND » THE INSANITY OF REALITY » FINANCIAL COLLAPSE » Take Your Money Out of the Bank, While You Still Can

Take Your Money Out of the Bank, While You Still Can

Take Your Money Out of the Bank, While You Still Can 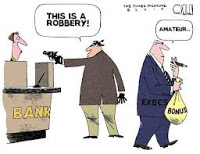 It is now clear, the government of Cyprus was given two options by the
IMF and the EU in which they were told that they could steal money from
private bank accounts or they could leave the Eurozone all together and
face total economic annihilation. This theft involves seizing the funds
of all accounts over 100,000 euros, then stealing up to 40% of those
funds sometime over the next few weeks, or whenever EU finance ministers
decide exactly how much to steal.

However, no accounts containing less than 100,000 euros will be
impacted. This amount was not arbitrarily chosen. The 100,000 mark was
chosen because all EU bank accounts are insured up to 100,000 euros.
Therefore, the criminal banksters believe that they can steal anything
over 100,000 euros because it is not insured.

Except for the 132 preferred insiders who got their money out of Cyprus
the day before the announcement of the grand banking theft, the
Eurogroup finance ministers
have subsequently announced that the large Bank of Cyprus depositors’
above the 100,000 level now have their accounts frozen. The 132
preferred insiders reminds me of Goldman Sachs doing a put option for
preferred insiders in Transocean stock the morning of the Gulf oil
explosion.

Lars Christensen, the CEO of Saxo Bank, in a recent blog post, chastised the thievery of the IMF and the EU with the following statement.

This is a breach of fundamental property rights, dictated to a small
country by foreign powers and it must make every bank depositor in
Europe shiver. Although the representatives at the bailout press
conference tried to present this as a one-off, they were not willing to
rule out similar measures elsewhere – not that it would have mattered
much as the trust is gone anyway. It is now difficult to expect any kind
of limitation to what measures the Troika and EU might take when the
crisis really starts to bite.

Depositors in other prospective bailout countries must be running scared
– is it safe to keep money in an Italian, Spanish or Greek bank
anymore? I don’t know, must be the answer. Is it prudent to take the
risk? You decide. I fear this will lead to massive capital outflows from
weak Eurozone countries, just about the last thing they need right now.

Plain and simple, the Cyprus fiasco is a bankster beta test which is
being used to test the intestinal fortitude of bank depositors. If there
is no uprising in Cyprus, the banksters will move on to Greece, then to
Italy, and on to Spain. Even New Zealand is rumored to be in
the cross-hairs of the banksters. In short, these tactics will spread
like wildfire to every G20 nation on the planet including the United
States.

Helicopter
Ben Bernanke refuses to address the possibility of this grand theft
spreading to the United States. However, recent DHS actions have spoken
volumes to that end, as they have declared that, under the PATRIOT Act,
they can enter any safe deposit box and seize any bank account.
Further, any bank employee caught leaking DHS memos to the public can
and will be prosecuted under the same act. Subsequently, the US will not
need a Cyprus-like Deposit Tax since they can take whatever is deemed
as contraband by an inspecting DHS agent -- and they will not likely
stop with seizing safe deposit boxes.

Now America should know why the DHS has purchased 2.2 billion rounds of
ammunition and 2700 armored vehicles, as they know that this planned
theft will be met with resistance by American account holders. And DHS
will not stop with the theft of our bank accounts. My sources tell me
that Obama is going after every investment including our pensions and
401(k)’s. The banksters on Wall Street are also acquiring firearms,
ammunition and control over private mercenary corporations like DynCorp and Blackwater, as authorized by Department of Defense (DOD) directive 3025.18. It
is interesting to note that this is the same DynCorp that was caught
trafficking in child sex rings and got off with only a small fine. The
bankers have revealed themselves for who they really are.

With all the discourse covering this volatile situation in which
nobody’s money is safe, the “legal precedent” has already been set in
stone courtesy of the United States justice system. Who could ever
forget the MF Global (MFG) scandal
which stunned American financial centers when Jon “the Don” Corzine,
CEO of MF Global, oversaw the disappearance of $6.3 billion dollars,
from secured and segregated accounts, which were used as collateral on
bad gambling bets placed upon indebted European nations. The subsequent
European nation’s credit ratings went down the toilet and JP Morgan, the
mastermind behind this theft of secured investment funds, handsomely
profited. And where was the Securities and Exchange Commission during
this criminal debacle? Well, the agent in charge of the division which
would have overseen the MF Global theft by former Goldman Sachs, Jon
Corzine, was former Goldman Sachs enforcement agent, Gary Gensler.

And let’s not forget about the stunning decision
made in August of 2012, in which the 7th Circuit Court of Appeals, from
Illinois, ruled that once a person deposits their personal money in the
bank, the bank is free to do whatever it wants to do with the depositor
funds including covering their bank losses, engaging in risky
investments and, presumably, even stealing the funds. Is it clear why
Jesus chased the money changers from the Temple?

Get your money out of the bank immediately. Leave just enough in the
bank to pay bills. Buy a fireproof safe and install it in a secure and
hidden location within your home. Do not keep anything in a safety deposit box because very soon it will become the property of DHS.

Could this be the beginning of the trigger event which will ultimately
lead to revolution in this country, complete with roundups and mass
exterminations of dissidents? Time will tell. Meanwhile, get your money
out of the banks, now, while you still can.

Dave is an award winning psychology, statistics and research
professor, a college basketball coach, a mental health counselor, a
political activist and writer who has published dozens of editorials and
articles in several publications such as Freedoms Phoenix, News With Views and The Arizona Republic.

The Common Sense Show
features a wide variety of important topics that range from the loss of
constitutional liberties, to the subsequent implementation of a police
state under world governance, to exploring the limits of human
potential. The primary purpose of The Common Sense Show is to provide
Americans with the tools necessary to reclaim both our individual and
national sovereignty.

OUT OF MIND » THE INSANITY OF REALITY » FINANCIAL COLLAPSE » Take Your Money Out of the Bank, While You Still Can

»  Banks Can Legally Steal Customer Funds From Private Checking Accounts....This means that once a banking customer deposits their money into an account with a bank, the funds become property of the bank.
» You owe no money or mortgage to any bank. All banks have been foreclosed.
» Australian Government Set to Seize Money from Citizens Bank Accounts
» Bad-clown Rising ~ HCS REAL MONEY BANK
» A funny thing happened when I tried to withdraw money from the bank