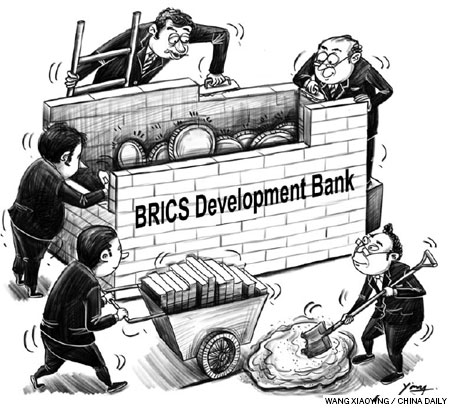 The International Monetary Fund is an extortion financier’s outfit
for a gang of exploiter banksters. The colonists of global mercantilism
operate on extending credit with strings attached and assets targeted
for attachment. Poor and underdeveloped economies beg for roll over
extensions of old debt in an endless circle of currency debasement and
resource transfer. So why anyone would get excited over a competing
banking house, seems to escape implications within the news
publications.

“The bank is intended to fund development and infrastructure projects
in BRICS nations and elsewhere. First discussed a year ago, it has been
described as an alternative to the IMF and World Bank for developing
countries.

Although the plan is the biggest announcement to come out of a summit
of BRICS leaders in Durban, South Africa, where they signed an accord
today, details such as how much capital the bank will have, its
structure and its location have yet to be worked out.” 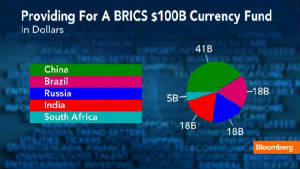 Would this development bank become simply a Chinese dynasty
investment structure based upon the weight of their financial leverage
within the system? Or would the union of eager modernizing countries
really be the future formula for economic growth and wealth? On the
surface the positive foreign reserves and lower indebtedness seem to
answer a resounding yes, but look a little deeper.

Without specific details, the viability of such a scheme is unknown. The article, BRICS Seek to Cement Position in Global Economic Landscape, does not exactly envision a smooth maturation.

The planned development bank “is feasible and viable,” leaders
confirmed in a statement on Wednesday. Such a bank would “supplement the
existing efforts of multilateral and regional financial institutions
for global growth and development.”

However, officials speaking earlier during the summit admitted that
various key details remain to be worked out before the proposed bank can
become fully operational – a process that is expected to take years.
For instance, disagreements have already surfaced among the BRICS on the
specifics of the bank’s mandate, and how exactly the institution would
be financed.”

The question, missing from the depths and significance of news
analysis is whether a competing fund for international lending from a
group of rival countries will improve on the sorry record of Western
banking.

Venky Vembu from First Post in BRICS Bank is just a castle in the air, points out the infighting among participating partners.

“Analysts who attend the BRICS deliberations point out: “By day they
talk grandly of multilateral action to tip the playing field in favour
of poorer nations, while by night they scheme shamelessly against each
other, often in conjunction with their supposed economic oppressors in
the West.” There is, he adds, virtually nothing that unites them other
than resentment and suspicion of Western monopoly – not all of which is
justified.”

Another viewpoint that brings the discussion down to earth is written by Ruchir Sharma in The Economic Times article, Brics summits are so last decade: All members are slowing down .

All the Brics are slowing sharply. China’s economy has slowed from an
average annual growth rate of 11% in the last decade to less than 8% in
2012. That has taken the wind out of economies that set sailBSE 0.56 %
by selling raw materials to China, particularly Brazil and Russia, where
GDP growth slipped to 1% and 3.5%, respectively, last year. Investors
are heading for other destinations, and in dollar terms the Brics stock
markets are trading 30-40 % below the peaks of the last decade. But,
once again, the politicians are a step behind.

The Brics no longer look like a rising economic axis. On average, the
growth rate of Brazil, Russia and South Africa is likely to be around
2.5% over the next few years, about the same pace as the US. That would
be a terrible disappointment for these developing nations eager to catch
up to the West, as their per capita income is much lower than that of
the US. Owing in good part to the Brics slowdown, the US economy is now
growing at the same pace as the global average for the first time since
2003, leading to stabilisation in its share in the world economy at
around the long-term average of 23%.”

These foreign press items reflect a much different understanding from the news report on the BRICS announcement video, ‘Hegemonic corporations scared as BRICS plan bank to rival IMF
‘.An optimistic projection that the global economy will generate
sensible growth and prosperity because of BRICS leadership, is a stretch
at best. This concern is certainly no endorsement of the existing
Western debt created money-banking model. However, the power of the IMF
and World Bank is based upon the military enforcement arm of the NATO
machine.

The concept of central banking is immutably defined by the dominance
of empire. The peaceful relinquishment of international finance to the
BRICS is about as probable as a soft landing from the world debt bubble.

Evolving is a testing of world markets for a transfer to a different banking center.
In order for that hypothesis to be even remotely possible, the world
reserved currency status of the U.S. Dollar must be replaced with a
basket of other currencies.

The BRICS countries have their own set of internal economic
shortcomings. Much of their cash flow is export trade related. The
collapse of global trade is the biggest risk that looms over a brighter
future for especially undeveloped economies. Another quasi-IMF stratagem
that presents a top down banking compliance is not an alternative to
the existing fraud.

Looking for altruistic benefactors that are willing to finance
capital requirements, from usury lenders is a fools dream. Setting off a
turf war, results in collateral damage, for everyone. Financial
conflict is predictable when business is based upon a destructive
banking version for an imbalance in commerce obligations. A butting of
heads between the BRICS, the EU and the USA is just as inevitable.

1. "However, the power of the IMF and World Bank is based upon the military enforcement arm of the NATO machine."


2. "Looking for altruistic benefactors that are willing to finance capital requirements, from usury lenders is a fools dream."

3. "Setting off a turf war, results in collateral damage, for everyone. Financial conflict is predictable when business is based upon a destructive banking version for an imbalance in commerce obligations. A butting of heads between the BRICS, the EU and the USA is just as inevitable."

Just like you and me on a smaller scale with debt driven spending!

Taxes are the key both on the large scale and small scale, put a small wrench in a large gear and it stops moving!