» Blue Moon to Light Up the Sky Tonight

» Did The Soviet Union Discover Aliens In The Deepest Lake In The World?

» The Osirion Temple and the Flower of Life: An Archaeological Nightmare

» Tarot mythology: the surprising origins of the world's most misunderstood cards

» Zooming in on the Skull Nebula

» POOPness for OCT 29: THE LAST DAYS BEFORE JERZY FRAUDKOWSKI LANDS HIS AZZ IN PRISON? FINGERS CROSSED


Glowing red arcs invisible to the naked eye have been spotted high above Europe.
The mysterious phenomenon has never been captured before, and are remnants of the magnetic storms that batter the Earth.
An Italian telescope was able to capture them for the first time high up in the ionosphere, which stretches from about
50 to 370 miles (85 to 600 kilometers) above the Earth.

An 'all sky image' showing a glowing red arc
invisible to the naked eye, and a low elevation shot showing the same
phenomenon.The arcs have now been detected high above most of Europe.
The images were taken from Cima Ekar in Asiago, Italy on 26th September
2011, and is the first time the event has been seen

When streams of high-energy, charged
particles come rushing from the sun to batter Earth, they cause what are
called geomagnetic storms.

These events are disruptions in the
magnetosphere, the part of Earth's atmosphere dominated by the planet's
magnetic field, and cause giant,
bright auroras in Earth's polar regions.

An international team of scientists watched the sky with the observatory during a geomagnetic storm that struck Earth in 2011.

Using a new All-Sky Imaging Air-Glow Observatory
(ASIAGO), located in northern Italy, researchers set up cameras with highly
sensitive sensors and a fish-eye lens in a bid to to observe the elusive arcs.
The arcs give off a very specific wavelength of red light, but are too faint to see with the naked eye.
After comparing their observations with
satellite- and ground-based observations, the researchers found that red
arcs could reach all the way down to Europe, stretching from Ireland in
the west to Belarus in the east.
Red arcs happen when oxygen atoms in the
ionosphere emit light, after being excited by electrons heated at
greater heights in Earth's magnetosphere 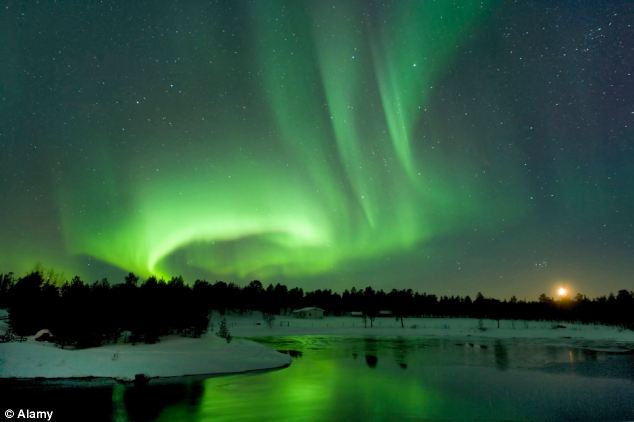 The Northern Lights, also known as Aurora
Borealis at moonset near Inari, Lapland, Finland. Researchers have now
captured another effect of magnetic storms, a red arc


The fact that scientists can now see
these arcs over Europe means that, in combination with similar data from
the Americas and the Pacific Ocean, researchers can now see how long
the arcs stretch across vast distances over the planet 'and thus how
long it takes the magnetosphere to be drained of its storm-time energy,'
researcher Michael Mendillo, a space physicist at Boston University,
told OurAmazingPlanet .
The arcs appear at lower latitudes, unlike auroras, which typically occur over higher latitudes.