OUT OF MIND » THE INSANITY OF REALITY » FINANCIAL COLLAPSE » The bitcoin bubble explained: Understanding the mathematics of the inevitable bitcoin crash

The bitcoin bubble explained: Understanding the mathematics of the inevitable bitcoin crash

The bitcoin bubble explained: Understanding the mathematics of the inevitable bitcoin crash Wed Apr 10, 2013 7:08 am 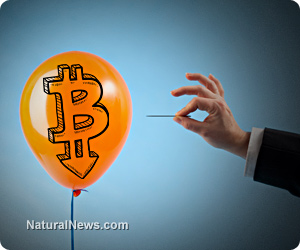 (NaturalNews) John, Mary and Kate are three "investors" who are
buying bitcoins. Each time one of them buys a bitcoin, the value of
bitcoins rises due to increased demand.

But the three of them, in total, THINK they have a grand total of $6,000 worth of bitcoins because ALL the bitcoins they purchased are now "valued" at the most recent purchase price of $200.

In total, these three people believe they have $6,000 worth of bitcoins.

Answer: It doesn't exist. It is an illusion.


Bitcoins, like stocks, create the illusion of free wealth during a rise in valuation


In truth, John, Mary and Kate are all suffering under a shared delusion
by thinking they each possess $2,000 worth of bitcoins. All currencies
are shared delusions, including the U.S. dollar. They only hold their
value as long as very few people sell the currency. Once a selloff begins, the mathematical process that created the excess "virtual valuation" reverses itself, destroying valuations across all the investors.

All currencies depend on "faith" in the currency. That's why the U.S.
dollar is claimed to be backed by the "full FAITH and credit of the U.S.
government." Without the faith, the currency collapses.


Bitcoin valuations also require faith... faith that a large selloff will
not occur. Because if it does, prices will naturally fall as the supply
of bitcoins increases due to people selling them into the market. Here's how that will happen (in reverse of the earlier example):

Kate sells first, commanding $200 for each bitcoin she sells, so she recovers her full $2,000 in US dollars.

By the time Mary tries to sell, bitcoin prices have collapsed to $20 per bitcoin. So she gets $200 for selling her bitcoins.

Finally, John is the latest to sell, and by that time prices have
collapsed to $1 per bitcoin, so John gets $10 for selling his.

The brings up a truism about any such investment vehicle, including currencies, stocks and bonds:

Perceived valuations do not reflect the actual cash value to be received during a mass selloff. What they reflect is the maximum optimism, multiplied across all account holders, based on the last selling price.


Here's another way to understand this


Suppose one million people currently own one bitcoin each, and the latest selling price for bitcoins is $200.

Now, suppose some guy gets excited and offers to buy just ONE bitcoin
at $220, signifying a $20 price increase. A seller figures, "Well, I'll
make twenty bucks" and sells him the bitcoin at $220.

Now, suddenly, $220 is the latest selling price for bitcoins, making it the new valuation
for ALL bitcoins. So those one million people who all own bitcoins now
think each of their bitcoins has gone up by $20. This has the effect of
creating $20 million in extra valuation out of thin air.

Yep, suddenly the total valuation of bitcoins is $220 million instead
of $200 million, and this was all due to ONE transaction placed by ONE
person, using nothing more than $220 in U.S. currency to make the
transaction.

Now you see how easily the central banks could be manipulating bitcoins into a sky-high bubble followed by a crash.

How to accomplish this? It's
stupidly simple: Just start creating money out of nothing (i.e. crank of
the U.S. dollar printing presses) and use that fake fiat currency to purchase billions of bitcoins at ANY price, driving bitcoin valuations sky-high.

Keep pumping money into bitcoins until the speculators ("fools") jump
on board, thinking they're all going to get instantly rich by joining
the latest new "free money fad."

Stand back as the bitcoin
valuations reach the stratosphere, suckering even more people into
parting with their hard-earned cash by buying into the system.

And then, when the timing is right, start SELLING billions of bitcoins
into the marketplace at any price. FLOOD the marketplace with your
entire inventory. The price support for bitcoins will shudder and
collapse, and once the collapse begins, fear will kick in and
sellers will pile on. As the prices collapse even further, fear will
turn to panic, and people will attempt to "sell everything at any
price!"

That's the point where bitcoin crashes hard, thereby accomplishing the exact goals of the central banks. History shows that markets crash FASTER than they rose,
so you can expect the eventual bitcoin crash to be wildly accelerated
in terms of velocity. Billions of dollars in valuation will be wiped out
overnight, and more importantly, the reputation of bitcoin will be destroyed.

Mission accomplished for the criminal central banks who excel in market manipulations and psych warfare.


How high will bitcoin go before the crash?


Mark my words: Bitcoin is headed for a disastrous crash. All the
signs are there. It's undeniable. When speculative investors, driven by
greed, flood a particular investment vehicle creating a fast-expanding bubble, a crash is inevitable.

But nobody knows just how high bitcoin might go before greed turns to
fear. It could reach $500, $5,000 or even $50,000 per bitcoin before
this happens. If more craziness unfolds in the EU, that could also
accelerate a rush of capital into bitcoins, causing their value to
skyrocket even more.

But make no mistake: Bitcoin has now become a casino. If you are buying bitcoin right now, you are gambling with your money. There's a sucker born every minute... try not to be one of them.

The only smart play right now is to buy bitcoins at market while having
an automated sell system in place to sell bitcoins if they drop to a
specified trigger price (a non-expiring sell order). To my knowledge,
this can only be accomplished through custom software development, not through any existing bitcoin wallet service or exchange service.

The few smart people who manage to build such systems and deploy them
will likely become millionaires. Everybody else who depends on human
reaction times in an attempt to try to "time the market" will ultimately
be the losers. If you are buying bitcoins right now and thinking to
yourself, "I'm gonna buy today, hold them, and sell at the top!" then
look in the mirror and mouth the word "SUCKER" to yourself ten times
until it sinks in.

Like everyone else, you will fail to sell at
the top. You will ride the losses down to nothing, and you will lose
almost everything you put into the system. Why? Because you're only
human, and when it comes to the fear and greed of markets, human
psychology is pathetically predictable.

All this has happened
before, over and over again. Bitcoin is new, but the current craze
behind it is just history repeating itself.

Personally, I'm
saddened to see bitcoin become a speculative investment fad. It's going
to harm the credibility of this currency that the world truly needs as a
long-term decentralized crypto-currency. I want bitcoin to succeed in the long run which is why I lament the manipulated bitcoin crash that I know is coming.

Rest assured, however, that I will be buying up bitcoins in huge numbers
once the crash fully unwinds. There's never a better time to buy than
when all the world's sellers are in a panic, trying to unload their
bitcoins at any price.

OUT OF MIND » THE INSANITY OF REALITY » FINANCIAL COLLAPSE » The bitcoin bubble explained: Understanding the mathematics of the inevitable bitcoin crash