The Citizen Hearing on Disclosure is Coming

That "Citizen Hearing" on UFO "Disclosure"


According to the pro-ET lobbying group Paradigm Research Group,

An event with historical implications will be held at the National Press Club in Washington, DC from April 29 to May 3, 2013.
At that time as many as forty researchers and military/agency witnesses
will testify for thirty hours over five days before former members of
the United States Congress... The Citizen Hearing on Disclosure of an
extraterrestrial presence engaging the human race will attempt to
accomplish what the Congress has failed to do for forty-five years -
seek out the facts surrounding the most important issue of this or any
other time.

But of course, to lobby for "disclosure" implies that there is something
to "disclose," which is highly dubious. And to hold a valid "hearing"
implies that witnesses are queried under oath, which of course will not
be the case, leaving them free to fabricate as much as they please
without fear of repercussions. The five former members of Congress are
being paid a reported $20,000 each by Paradigm to participate in this
circus.

"Former
Alaska senator and presidential candidate Mike Gravel [Dem/Lib,AK] is
participating in a forum that seeks to prove that aliens have visited
earth"

“I agreed to participate,” Gravel told CBS 11 via telephone. “I have my
own views and skepticism, but I'm reading up on the subject, and like
anything else, the more you read up on the subject the more you become
surprised. I have no preconceived ideas that there are or aren't
extraterrestrial influences as to things that are going on, and I'm
curious. I do a lot of reading and studying about what's going on,
especially as I get older, and so I'm curious if there is something out
there that they can prove to skeptical eye.”

Former Rep. Merrill Cook, [R-Utah] says he "doesn’t
believe aliens have made contact with Earth, but he promises to keep an
open mind as he participates in 30 hours of testimony in a mock
hearing".

Another is from Michigan: "A group hoping to prove alien contact with
Earth has tapped former U.S. Rep. Carolyn Cheeks Kilpatrick to help
convince the federal government to acknowledge the existence of
extraterrestrials. The Detroit Democrat will help preside over 30 hours of congressional-style hearings."

The other participants are former representatives Lynn Woolsey [D-CA], and Roscoe Bartlett [R-MD].

As for those giving "testimony," it's mostly the usual suspects whose stories we've heard over and over.

Actually, there is nothing "historic" about this farcical "hearing."
Every couple of years, something like this comes down the pike, and
impresses nobody.

On September 27, 2010, UFOlogist Robert Hastings organized a "Disclosure Conference" also
at the National Press Club in Washington, DC. Many claims were made
about UFOs supposedly interfering with U.S. nuclear missiles, as if the
aliens were pacificsts. (However, the Russian-born UFOlogist Paul Stonehill has elsewhere claimed that UFOs attempted to launch Soviet missiles, as if the aliens were war mongers.) A rebuttal to one of Hastings' main cases is here.

On April 20, 2009, Bassett and Paradigm Research hosted a "disclosure" press conference at the National Press Club. Among the speakers then were Edgar Mitchell, Nick Pope, Richard Dolan, and Roger Leir, who are all also speaking in 2013.

On April 21, 2008, Bassett and Paradigm Research held a UFO-related Press Conference
at the National Press Club in Washington, DC. Among the speakers were
Richard Dolan and Grant Cameron, who will both be speaking again in
2013.

On Septermber 17, 2007, Bassett and Paradigm Research held a press conference at the National Press Club,

to
demand that presidential candidates support a "truth amnesty" to end
the "government-imposed truth embargo on the facts confirming an
extraterrestrial presence."

Among the participants was Alfred Lambremont Webre, who recently has been claiming that Barack Obama was teleported to Mars in the 1980s.
Bassett presented Webre with a Lifetime Achievement award in 2007 for
his work for 'disclosure,' although Bassett has since distanced himself
from Webre's Mars Teleportation claims.
On November 12, 2007, James Fox and Leslie Kean hosted a press
conference in Washington, DC, with many of the same witnesses, many of
the same claims. The tales told at this press conference were made into
the documentary movie[url=http://www.amazon.com/I-Know-What-Saw/dp/B002VH7P5S/ref=sr_1_1?s=movies-tv&ie=UTF8&qid=1365978601&sr=1-1&keywords=I know what I saw] I Know What I Saw[/url]. Among Paradigm's 2013 speakers Penniston, Pope, and Santa-Maria also spoke then. 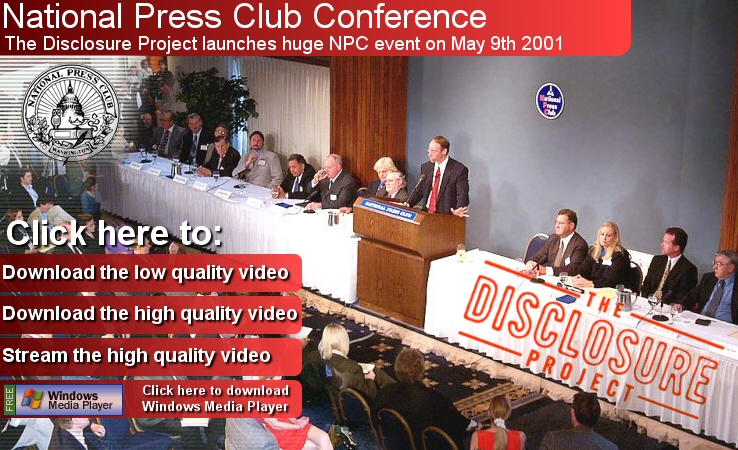 On May 9, 2001, with much ballyhoo Steven Greer launched his UFO
"Disclosure Project" with a press conference at the National Press Club.
The 2013 Paradigm speakers who also spoke in 2001 are Nick Pope, Edgar
Mitchell, Robert Salas, George A. Filer, Robert Wood, and Steven Greer.
It is unclear if these "witnesses" will have anything substantial to add
to the claims they made in the 2001 press conference.

So clearly, in the matter of 'Disclosure,' there is "nothing new under
the sun." I hope I didn't forget any other "UFO disclosure" press
conferences. If I did, please let me know!