OUT OF MIND » THE INSANITY OF REALITY » GOVERNMENTS & THE NEW WORLD ORDER » Suspect shoots at security officer at Watts Bar Nuclear Plant, officer shoots back 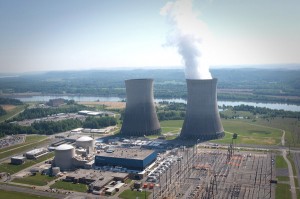 An
unidentified suspect fired on a security officer at Watts Bar Nuclear
Plant near Spring City early Sunday morning, and the officer fired back.
No one was injured, and the suspect fled. (Photo courtesy of TVA)

An unidentified suspect fired multiple rounds at a security officer
on patrol at the Watts Bar Nuclear Plant early Sunday morning, and at
least one round hit the security officer’s vehicle, an official said.

The suspect appeared to have initially been on the ground but may have fled in a boat, TVA spokesman Jim Hopson said.

The shots were fired just after 2 a.m. this morning on the east side
of the 1,700-acre plant, near the Tennessee River, toward the plant’s
southern boundary, TVA said. The officer was several hundred yards
outside the protected area where the reactor and power equipment are
located.

Hopson said some information can’t be released yet, such as the
identity of the security officer, or it is not available, such as the
total number of rounds fired. Hopson didn’t have a description of the
suspect.

“Many of the details I won’t be able to share,” he said. “The investigation is still ongoing.”

“There was no threat to public safety during the incident and no
threat to the security of the plant due to the location outside of the
plant perimeter,” TVA said in a Sunday morning statement. “An
investigation is under way.”

TVA said the plant remains under a heightened state of security.

“Local law enforcement agencies are assisting TVA Police with the
investigation,” TVA said. “The Nuclear Regulatory Commission and
appropriate state and federal agencies were notified, and the NRC has
staffed its incident response center in the Region II office in Atlanta
and is monitoring the events, along with the resident inspector who has
responded to the site.”

Hopson said it appears that only the suspect and the security officer were involved.

The Watts Bar Nuclear Plant is near Spring City, which is about 45
miles southwest of Oak Ridge. It’s in Rhea County south of Watts Bar
Lake and on the north end of Chickamauga Lake.

The 40-year-old plant has one 1,100-megawatt unit that is already operating and a second is under construction.


I put this up because I had a dream about a nuclear facility last night. Any one else?

OUT OF MIND » THE INSANITY OF REALITY » GOVERNMENTS & THE NEW WORLD ORDER » Suspect shoots at security officer at Watts Bar Nuclear Plant, officer shoots back

» A mall security officer sighting UFO over Glendale Galleria CA USA 05/26/2015
» Does Anyone Know About Radiation from Nuclear Plant in Indiana?
» Military officer 'shot an alien' back in 1978 lol :)
» S.C. nuclear facility on lockdown after security issue
» Tidbits: What is being Held Back from YOU! http://www.veteranstoday.com/2012/01/26/tidbits-what-is-being-held-back-from-you/ Secrets are More Often Conspiracies and Shame and Seldom are National Security