“Contractors” at Boston Marathon Stood Near Bomb, Left Before Detonation

(Photos) Seen across street after blasts talking with FBI bomb squad. Who were they? What were they and the FBI doing? 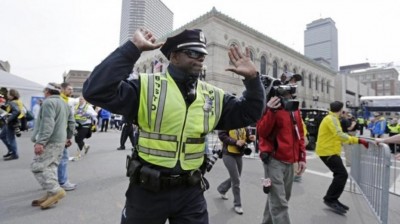 What appear to be private contractors, wearing
unmarked, matching uniforms and operating an unmarked SUV affixed with
communication equipment near the finish line of the Boston Marathon
shortly after the bomb blasts – can be seen beforehand, standing and
waiting just meters away from where the first bomb was detonated.

The contractor-types had moved away from the bomb’s
location before it detonated, and could be seen just across the street
using communication equipment and waiting for similar dressed and
equipped individuals to show up after the blasts. 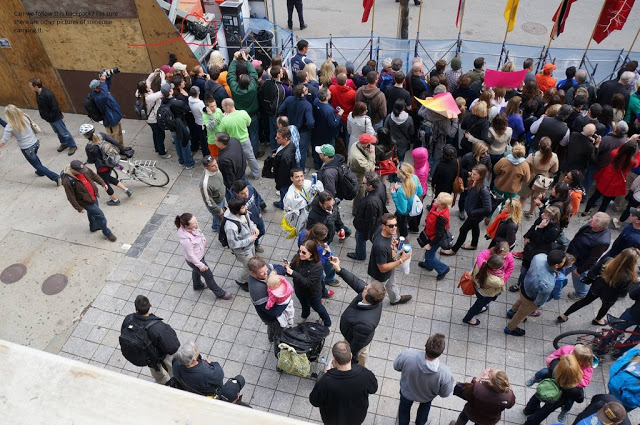 Image: An already widely distributed photo
showing the contractor-types on the bottom left, just left of where the
bomb was placed and detonated. The men are wearing matching, unmarked
uniforms, large black bags, and appear to be waiting, separately, and
“behind” the rest of the crowd. In the upper left corner, a wooden
structure forming one half of a temporary photography “bridge” over the
finish line can be seen and serves as a useful reference when
establishing the contractor-types’ position in other photos. 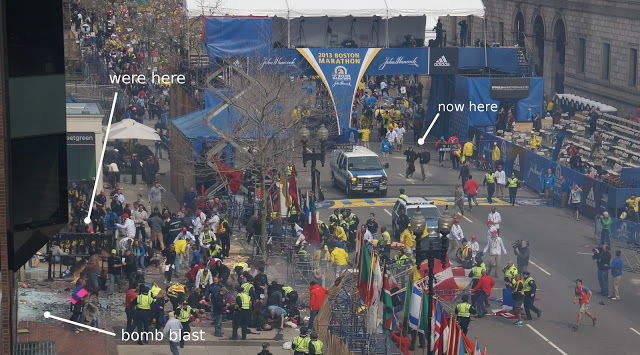 Image: After the explosion, two of the contractors
seen by the wall next to the bomb, appear across the street, both using
communication equipment. This photo too has been distributed and
enlarged many times across the Internet. (click to enlarge) 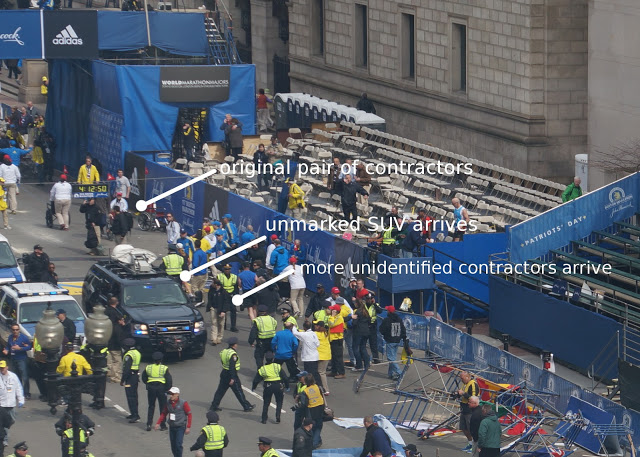 Image: An unmarked SUV with a considerable amount
of communication gear on the roof appears, surrounded by identically
dressed men. The vehicle parks near the bleachers. (click to enlarge) 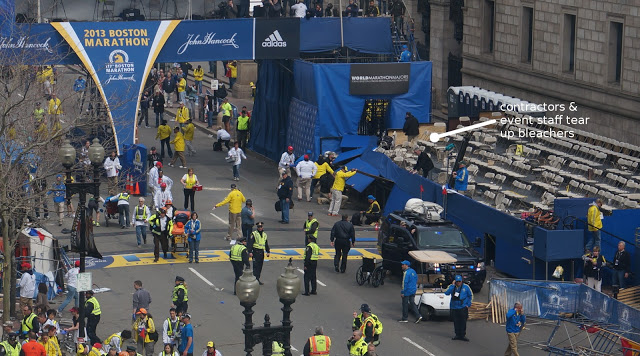 Image: Event staff and contractors both above and
below the bleachers begin tearing up the skirting and appear to be
looking for something or retrieving something while casualties are still
being treated and evacuated across the street. (click to enlarge)


The men, numbering between 6-8 then begin tearing up the skirting
around temporary bleachers erected for the event, opposite the
explosion, before taping it off. Then, what appears to be an FBI bomb
squad truck pulls up directly behind the contractor-types’ SUV, with a
woman clearly wearing the letters F.B.I. on her tactical vest emerging
and speaking with the contractor-types. Together they disappear from the
scene, leaving their vehicles behind. 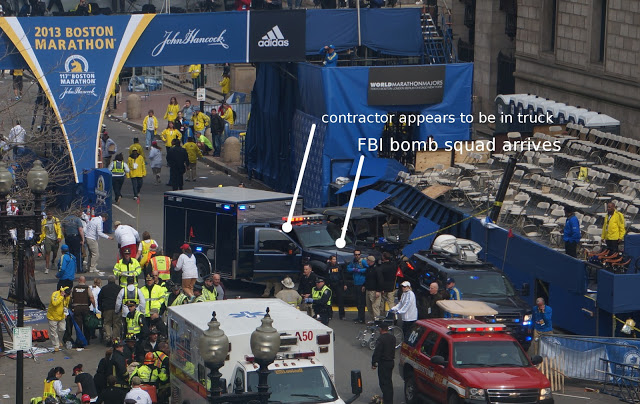 Image: What appears to be an FBI bomb squad
truck pulls in, with a woman wearing what is clearly the letters F.B.I.
on her vest. She talks with two contractors while it appears a third is
partially in the truck’s right-hand side. Also note that the area
contractors and event staff tore up, is now taped off. (click to enlarge) 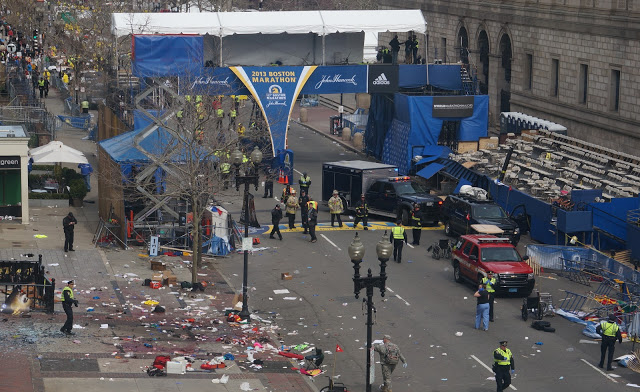 Image: The FBI truck and contractor SUV sit
seemingly abandoned – neither the FBI agent, nor the contractors can be
seen. What they did, or where they went remains so far, unknown. (click to enlarge)


It should be noted, that with the exception of the contractor-types,
all other responders at the scene, including the FBI agent, can be
clearly identified, from police to the fire department, to medics and
even individuals wearing vests with “B.A.A. Physician” written on them.
It should also be noted that no other uniformed individuals can be seen
standing near the bomb site aside from the contractor-types.

These men were unidentified, professional contractors apparently
augmenting public servants at the Boston Marathon, present before and
after the bomb blasts in the direct vicinity of the incident. After the
blasts, whether it was their intended function or not, they appeared to
be searching for something under the bleachers before being joined by
what appears to be the FBI bomb squad. The FBI and the city of Boston
has so far categorically failed to provide any information on these
highly suspicious individuals.

Questions That Must be Answered

Several questions must be answered by the FBI, leading the
investigation on behalf of we, the American people. The first question
is who these men were, with large, black bags in the direct vicinity of
where a bomb would detonate, moving away before the blast, and appearing
directly across the road afterward. Who hired them and what was their
function? Why were they moving amongst the crowd in a semi-covert
fashion when all other public servants present were wearing proper
uniforms and clearly identified? Did police, firefighters, event
organizers, and medics know these men were present and what they were
doing?

Why did it appear that the FBI was fully aware of their presence, and
in fact working with them, specifically with what looks like a bomb
squad unit? Were these contractors specialists in explosives, and if so,
what is the significance that at least two of them were spotted just
meters from where the blast occurred?
Why These Questions Demand Answers

The checkered, frightening history (see: FBI’s History of Handing “Terror Suspects” Live Explosives)
of the FBI’s involvement in fomenting false terror attacks, and even
presiding over attacks that succeeded in maiming and killing innocent
people, should call into question their presence or involvement at any
public event, especially when seen associating with unidentified,
semi-clandestine organizations that appear to be private contractors.

Posts : 3470
Join date : 2012-02-10
Age : 66
Location : Florida
It was a planned, false flag event, and I believe 'O' had a lot to do with it just because his gun confiscation plan was a friggin flop, so this was his 'Get even' time, along with detailed instructions from the cabal, guaranteed-This was probably planned long in advance, because 'O' knew he was going to lose his quest for gun control-And it isn't over yet- :x

Posts : 8269
Join date : 2012-10-03
Age : 54
Location : Australia
I think I missed something somewhere along the lines because if all the victims were actors along with all the medical staff and police etc etc and no one actually got hurt, what was the point of it? What was the benefit of this pretend bomb attack?

Admin
Posts : 107469
Join date : 2012-01-04
Location : Woodstock Nation
Well nannee... then the ones that are called government (but do not run the show) can take away more (of what people are under the illusion of) rights away.

It is the shattering of these illusions that we are all working so hard to see happen.

It is ALL lies.

Admin
Posts : 107469
Join date : 2012-01-04
Location : Woodstock Nation
I do know. That is what makes this so very hard. Good people have a hard time to understand what is really going on. Good people can not wrap their minds around this.

Purpleskyz wrote:I do know. That is what makes this so very hard. Good people have a hard time to understand what is really going on. Good people can not wrap their minds around this.

You are exactly right Purps.....Its so hard for so many good folks to actually understand any of this....In time, they will....