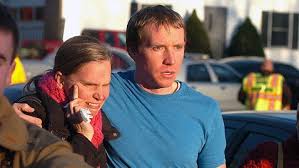 Sandy Hook actor “Robbie Parker”
at work with his co-star 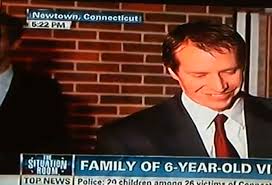 When we say the lamestream news is a bunch of theater, we’re speaking literally.

Makes me wonder how these actors sleep at night. Aiding and abetting the feds in deceiving The People is treason, isn’t it?

Just out of curiosity I Googled “treason”. “Treason can also be aiding the enemies of your own country.”

So, the ones who perpetrate these terror attacks are murdering
The People of The Republic of the Unites States of America and are our
enemies, and anyone who assists them and plays a role is complicit, are
they not? I sure wouldn’t want that on MY conscience.

Great sleuthing, Mike! The lamestream corporate media creates a
fairy-tale world and many of The People are only too happy to live in
it.

I think the agenda of the Illuminati is all too clear to anyone who’s awake today.

(NaturalNews) The U.S. government has, since at least 2004, used
“professional actors” to depict victims in terror drills that simulate
large-scale attacks.

According to this ABC News article from 2004,
“professional actors will play the roles of victims.” In addition, a
“virtual news network” will be created an operated in order to practice
the dissemination of government propaganda during the event.

This analysis
of the Boston marathon bombing claims a double amputee was an actor and
that the blood on the scene was “Hollywood blood” designed to look
bright red for the cameras. (Real blood is much darker…)

University professor James Tracy also argues that the Boston marathon bombing was pulled off with theatrical elements and wasn’t accurately portrayed in the media.

On the Sandy Hook side, many people say the “parent” Robbie Parker
was an actor. This video appears to show him laughing and smiling while
off camera, then magically transforming into a sad, tearful father once
the cameras start rolling:
https://www.youtube.com/watch?v=cKWgCRBR5qE

Here’s another announcement from 2003 which also says:

Volunteers and professional actors will play the roles of victims, who will be rescued, diagnosed, decontaminated and treated.

Actors used to augment the propaganda


The use of professional actors doesn’t mean real people weren’t
harmed or even killed in the staged attack. It only means that the
actors are selected to appear on camera and give carefully rehearsed
“testimony” that achieves the desired political goal of the event.

Sandy Hook, for example, was designed specifically to demonize all
gun owners in America and ultimately repeal the Second Amendment.
Because such a goal can never be achieved through reason and rational
thinking, the strategy involved invoking raw emotion through the use of professional actors who played the role of bereaved parents.

In this way, professional actors are used to augment the propaganda,
making sure the post-event news coverage delivers the desired message to
the masses.

For example, the post-9/11 message under the Bush administration was
that “America should give up its liberties to stop terrorism.” This
message, propagandized through a number of theatrical events (such as
the demolition of WTC building 7), was engineered to lead to the passage
of the Patriot Act and the creation of the Department of Homeland
Security. Yes, the DHS that still haunts us today was the spawned
hellchild of 9/11 theatrics.


Every false flag event in recent memory has been accompanied by a
staged drill. In the middle of the drill, an actual bombing or other
attack is carried out, and the script is suddenly flipped from a “drill”
to a “terror attack.” All the assets that were set up for the drill —
law enforcement presence, bomb-sniffing dogs and professional actors
playing victims — suddenly become key elements in the national news broadcasts covering the “real” terrorist attack.

The drill-false-flag format is highly effective because patsies who
are going to be blamed for the event are simply told, “You’re
participating in a drill.”
This is likely what happened to the two brothers accused of carrying
out the Boston marathon bombings. Evidence clearly points to the
possibility that they were FBI assets who were likely told they
were taking part in a “drill.” We have already established that local
law enforcement was informed of the existence of a drill… and that they
shared this information with some participants in the marathon.

Even where drills aren’t used as a backdrop for carrying out staged false flag events, the drills still have the effect of indoctrinating the local populace to a police state presence. They get people used to seeing militarized goons running around pulling innocent people out of their homes in total violation of the Fourth Amendment.

It also gives the FBI insight on how local law enforcement will react to the terror plots actually being staged by the FBI itself.
This is invaluable information necessary for formulating yet more
domestic terror plots in order to keep the population in a never-ending
state of unbridled fear and government obedience.

Whatever happens in the months ahead, just remember the government has already admitted, “professional actors will play the roles of victims.”