More of Atlantis Surfacing in Greece?


More of Atlantis Surfacing in Greece? 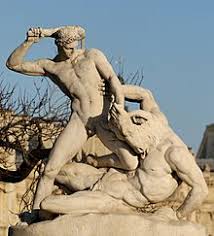 Theseus and the Minotaur

I visited Heraklion, Crete and Knossos many years ago and
literally felt the energies of the past; entranced by the stories of
labyrinths and minotaurs and in awe of the ageless classical sculptures.
I almost expected Hercules to appear around the next corner, or to find
a colossal Aphrodite seated in a temple at the Minoan Palace. There was
definitely a tug of recognition, although at that time I didn’t
understand it as such.

I don’t recall seeing anything at all that I would consider
Egyptian, but possibly the Greeks wanted to claim the area as theirs
alone and preserve what they felt was their heritage.

We were told that the rubble and toppled snow-white columns were a
result of earthquakes, but perhaps in times forgotten much of the
island of Crete had been submerged when Atlantis broke apart and sank
beneath the sea to end the reign of the dark.

It’s exciting to see in current times the remnants of what can be
nothing other than the culture of Atlantis discovered in oceans over
much of the globe, confirming that what we’re told are “myths”, are in
truth the history of mankind and other races who have visited this
planet for millennia.

In the days to come the sea will yield even more secrets that
have been hidden until the perfect time for us to realize our origins;
more pyramids, more ruins, more artifacts—more proof.

Lost City of Heracleion Gives Up Its Secrets

For centuries it was thought to be a legend, a city of extraordinary
wealth mentioned in Homer, visited by Helen of Troy and Paris, her
lover, but apparently buried under the sea.


In fact, Heracleion was true, and a decade after divers began
uncovering its treasures, archaeologists have produced a picture of what
life was like in the city in the era of the pharaohs.

The city, also called Thonis, disappeared beneath the Mediterranean
around 1,200 years ago and was found during a survey of the Egyptian
shore at the beginning of the last decade.

Now its life at the heart of trade routes in classical times are
becoming clear, with researchers forming the view that the city was the
main customs hub through which all trade from Greece and elsewhere in
the Mediterranean entered Egypt.

They have discovered the remains of more than 64 ships buried in the
thick clay and sand that now covers the sea bed. Gold coins and weights
made from bronze and stone have also been found, hinting at the trade
that went on.

Giant 16 foot statues have been uncovered and brought to the surface
while archaeologists have found hundreds of smaller statues of minor
gods on the sea floor.

Slabs of stone inscribed in both ancient Greek and Ancient Egyptian have also been brought to the surface.

Dozens of small limestone sarcophagi were also recently uncovered by
divers and are believed to have once contained mummified animals, put
there to appease the gods.

Dr Damian Robinson, director of the Oxford Centre for Maritime
Archaeology at the University of Oxford, who is part of the team working
on the site, said: “It is a major city we are excavating.

“The site has amazing preservation. We are now starting to look at
some of the more interesting areas within it to try to understand life
there.

“We are getting a rich picture of things like the trade that was
going on there and the nature of the maritime economy in the Egyptian
late period. There were things were coming in from Greece and the
Phoenicians.

“We have hundreds of small statues of gods and we are trying to find where the temples to these gods were in the city.

“The ships are really interesting as it is the biggest number of
ancient ships found in one place and we have found over 700 ancient
anchors so far.”

The researchers, working with German TV documentary makers, have also created a three dimensional reconstruction of the city.

At its heart was a huge temple to the god Amun-Gereb, the supreme god of the Egyptians at the time.

From this stretched a vast network of canals and channels, which
allowed the city to become the most important port in the Mediterranean
at the time.

Last month archaeologists from around the world gathered at the University of Oxford to discuss the discoveries starting to emerge from the treasures found in Heracleion, named for Hercules, who legend claimed had been there.

It was also mentioned fleetingly in ancient texts.