Augureye
Late in the afternoon of Friday April 24, 1964 New Mexico police
officer Lonnie Zamora was in pursuit of a speeding car just south of
Socorro, when a loud roar and flash of light off to the right caught his
attention and he broke off pursuit to investigate, thinking perhaps a
dynamite shack had exploded. Being as the hilly landscape obscured his
view, Zamora drove his cruiser as close as possible, then climbed a
small hillock in search of the source. Cresting the hill the
experienced police officer saw he was a hundred fifty yards from a car
sized, egg shaped UFO on the ground with two occupants outside,
apparently making repairs.

I have a vivid memory of that day, back when I was just fifteen years
old; listening to my transistor radio & shooting hoops in the
backyard when the announcer read the story of Zamora’s encounter in the
nearby desert. As I listened intently my skin became rippled with truth
chills. Everyone else calls them goose bumps which is just nonsense. I call them truth chills because it is how your [color:0d50=blue !important][color:0d50=blue !important]soul
lets you know you are in the presence of some core truth…and I had a
major outbreak that day! I was already quite interested in the subject
of UFO’s to begin with before the story broke and hearing of this close
encounter so close to home was like pouring gasoline on a smoldering
camp fire. That was it, I was hooked for life on the subject, and
anything remotely connected to it.

During the ensuing years the pursuit of this subject has been the
carrier frequency for my research and education about the real world
behind all the lies we’re constantly fed. As a general rule of thumb,
the amount and complexity of official denials is usually pointing to
exactly what is being hidden in the first place. It certainly didn’t
take too long for me to understand that this particular rabbit hole goes
way, way down there where the darkest and dirtiest truths are concealed
from view. When I finally found that core truth, it reared up and bit
me right in the subconscious. I was more than prepared to believe my
government was lying thru their teeth about UFO’s, but it backed me up
for a moment of pause when I realized the government wasn’t only lying
about alien presence on Earth but was indeed being totally controlled by
that alien presence.
I saw my first alien spacecraft in the skies above the southeastern
Oklahoma town of Hartshorne in the summer of 1966. I had traveled there
with two friends from high school because the town was in the news as a
hot bed of [color:0d50=blue !important][color:0d50=blue !important]UFO [color:0d50=blue !important]activity.
As it was, the residents of this tiny rural town were logging daily low
level daylight sightings of flying saucers for a period of many
consecutive months. I would have walked there if need be. My friends
and I stayed there for several days, camping out under the stars at
night watching the skies. To be sure, we had seen several strange
lights far off in the distance or at high altitude, but nothing more,
and we were feeling a bit gypped. The daylight sightings seemed to have
stopped during our visit, which made me somewhat suspicious. The
things we saw at night just weren’t close enough, and we feared we might
end up returning home with little more than mosquito bites.

It was July 26, and our last night in Hartshorne, and we were
depressed at striking out on the close encounter sighting we’d hoped
for. That evening there was a community sky watch in a huge open field
on the edge of town. The visibility was excellent and the weather
perfect, nary a cloud in sight. Because we were 200 miles from the
nearest large city, the night sky was spectacular without all the
washout from artificial lighting. There were maybe 25 or 30 people
present for the event, including the town’s leading [color:0d50=blue !important][color:0d50=blue !important]UFO [color:0d50=blue !important]enthusiasts,
Mrs. Alta Claire Morgan, & Mrs. Bob Bookout, who owned the land we
were on. My friends and I were determined that if there was any
activity we’d see and photograph it. This was our last chance. Some of
the folks trailed off home after a couple of hours, and eventually it
was just about a dozen of us true believers left. About midnight or so
Mrs. Morgan asked me if I thought ‘they’ were just sitting up there
watching us and laughing. I didn’t share her degree of humor. After so
many hours of watching the night sky over this town it somehow looked
brand new each time you looked up. Suddenly someone yells out, “Hey look, there’s two of them flying in formation!“
When we looked up sure enough there were two tiny white lights slowly
moving together directly over the field we were in. After a few
seconds, we could tell the lights were getting closer, because they were
getting bigger and brighter…when I looked thru my 10×50 binoculars I
could clearly see both lights, one at each end of a massive cigar shaped
“mother ship” type craft!! Each light was illuminating a small area of the hull around it, and it looked like seamless pounded aluminum.

By this time everyone else had also realized this was one huge craft
because there was not a human sound being made, and no one moved a
muscle. We watched as this huge ship floated silently down closer still
to our position. Now we could see the whole thing clearly with the
naked eye. There was no thought of getting a picture, no thought at all
as I just watched this thing come within 50 feet of the ground and fly
slowly toward the distant tree line some 300 yards away. As it headed
away from us we had a stern view, with just the aft light visible. When
the ship arrived at the tree line, it pivoted 90 degrees to the west,
and just hovered there above the trees for a period of five minutes
giving us a wonderful side view profile of the craft. Thinking back on
it I suppose the twelve of us must have resembled the people on “Close Encounters”
just standing there in silent awe in the presence of this otherworldly
craft. When it decided to leave, it again pivoted, back to the original
heading, and just [color:0d50=blue !important][color:0d50=blue !important]vanished! It took less than 2 seconds for it to escape eyesight flying at treetop level. 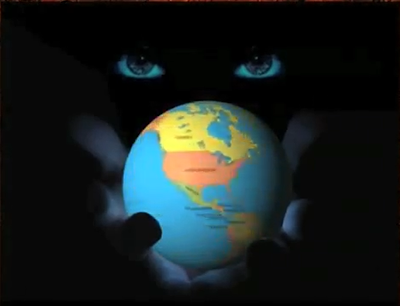 Just like Chinese nesting dolls, the Archon agenda has concealed the
truth of things by shrouding it with layer after layer of lies, deceits
and obfuscations. The Archons have captured the human race. Let that
sink in. They captured the entire population of this planet. It was
done so gradually, with such expert nuances as to be considered a
masterpiece; that’s how good their creeping assimilation is.
Researchers like John Lamb Lash believe that the Archons were
present in this part of the galaxy even before the Earth was fully
formed, and that seems to coincide with other lines of research that
lead us into the part of our history that is the darkest and best kept
secret. That secret is that back when mankind was very, very young
visitors from other worlds decided to ‘uplift’ our species, to
accelerate our development by genetic intervention; they mixed their own
DNA with that of early humans. This was not done for the purpose of
lifting us up to their level, but rather to create an entire race of
slaves, to further their unholy agenda. Now, all of this did not just
happen in a vacuum so to speak; as there exists a kind of confederation of sentient, space-faring races in this galaxy. Just as in [color:0d50=blue !important][color:0d50=blue !important]star [color:0d50=blue !important]trek these various races sometimes are at cross purposes, and conflict ensues. The ancient Indian text the Mahabharata
relates the story of a massive war fought in the skies by star beings
in flying ships called Vimanas. There were descriptions of terrifying
weapons sounding exactly like nuclear explosions…in ancient India 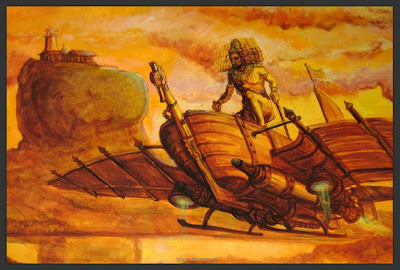 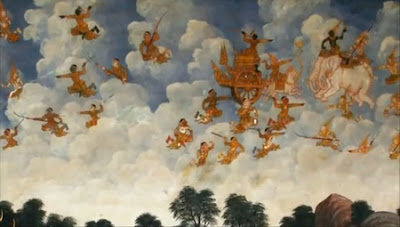 Some of the accompanying artwork leaves very little to the
imagination as to what the story was referring to. The point is I guess
that some of these races seek to do whatever they wish at all times,
and other races resist them when possible. Turf is carved out,
boundaries established and rules of engagement agreed to. In the
beginning this confederation of races decreed that Earth should be left
alone to develop however it would, but the Archons had different ideas,
and pushed the issue. We of course have all come to know of races such
as the Pleiadeans and Arcturians who seem to be peaceful, advanced and
benign, and yes, they also operate upon this planet on this plane of
existence, mostly as allies to us beleaguered earth folk. Unlike the
Archons, these other races tend to play by the ‘rules’ and are thus
unable to just step in, although I cannot for the life of me see how
doing so could possibly make things worse than they are now. MORE>>