OUT OF MIND » TRUTH IN CONSPIRACY THEORIES? » HISTORIES MYSTERIES » Here you go Nannee! - Experts Confirm the Mummified Remains of Faeries 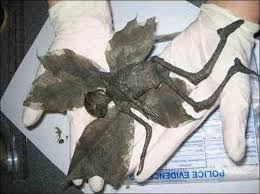 We’re going to see continuing evidence of life and life forms
we previously thought were fictitious or never knew existed. It’s all
unfolding at an increasing rate now, and at the perfect time.
I’ve always believed fairies to be real, so it’s no surprise to
me, just delightful confirmation. Some will say it’s a hoax. Maybe it
is… maybe it isn’t, but Snopes itself is a hoax, so don’t go there
looking for the truth.

The Nephilim giant skeletons are most certainly real yet Snopes
claims a photo contest is what generated the photos that make the
skeletons appear to be giant-size. I believe the Illuminati concocted
the photo contest and had one of their minions submit photos of the
Nephilim to discount their true size and place in our hidden history.
Since Nephilim skeletons have been found all over the globe, they cannot
all be rendered illegitimate by a farcical photo contest.
When you think about it, a damp, cool woodland probably isn’t
conducive to mummification. That’s usually a result of a hot, dry
climate, but I’m going to keep faeries and wood nymphs in my vision of
the New Earth.
Pyramids, artifacts, the Atacama alien, faeries, mermaids,
sasquatch… Just because we can’t see them doesn’t mean they don’t exist.
As our consciousness expands, so will our reality.
Do Fairies Live at the Bottom of Your Garden?

Maybe not anymore but a recent discovery would suggest that they
probably did. What appear to be the mummified remains of a fairy have
been discovered in the Derbyshire countryside. The 8-inch remains
complete with wings; skin, teeth and flowing red hair have been examined
by anthropologists and forensic experts who can confirm that the body
is genuine. X-rays of the ‘fairy’ reveal an anatomically identical
skeleton to that of a child. The bones however, are hollow like those of
a bird making them particularly light. The puzzling presence of a navel
even suggests that the beings reproduce the same as humans despite the
absence of reproductive organs.

The remains were discovered by a local man, who wishes to remain
anonymous, while walking his dog along an old roman road situated
between the Derbyshire villages of Duffield and Belper. The area has
long been shrouded in mystery with tales of ghostly highwaymen and
strange ‘dancing’ lights on warm summer evenings.

“I was walking along the lane at a point which passes an old Iron Age
barrow (burial mound) when my dog began to bark and act rather
strangely. He was barking in the direction of the barrow and would not
go anywhere near it which was strange as we walk past it almost every
day. 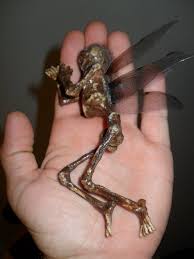 I was curious and approached the mound to see what could be
disturbing him and it then I noticed something odd…..in the side of the
barrow, a fissure as if a section of ground had subsided or opened up.
The crack measured about 2ft long and 1ft wide and looked to have been
formed recently as I had never seen it before. I knelt down and looked
inside the dark hole. The hill seemed to be hollow like a cave as I
could feel a cool draught against my skin. I used the small LED torch on
my car keys to see if I could see anything in the darkness.

It was at this point I saw something that startled me, 2 or 3 feet in
front of me I could see a human like form only this was much smaller.
My initial instinct was to call the police as I thought it may be the
body of a small child but as I looked closer I could see that this was
not the case. It was too small and more importantly, it had what
appeared to be wings! Not wanting to touch it I used a stick to
carefully drag it out and picked it up in one of the dog’s poo bags
(empty of course).”

He immediately called his wife stating he had found something
‘unbelievable’ and asked her to bring a camera and a box immediately.
“When I first arrived I could hear the dog barking from some distance, I
had no idea what he had found. As I approached the barrow I could see
my husband crouched down looking a something on the floor.

“What have you found?” I shouted. “See for yourself” he said. I
looked down and saw a tiny but perfect mummified human body with hair,
dark brown skin and more disturbingly, wings. “I know what it looks
like”, he said “but how can it be? And there’s not just one, I’ve had
another look inside that hole in the ground and there are more!”

The body was taken home in a biscuit tin and kept in a garage
overnight. The following day the local police were informed and the
remains were taken away for analysis. As a local expert on the
paranormal I was approached by the police for my advice although this
was kept rather quiet to avoid ridicule and press attention. I was taken
to the location by the man who originally discovered this amazing find.
On closer inspection the barrow appears to contain more that 20 fairy
bodies all in varying states of mummification. 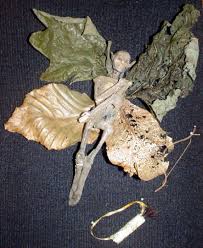 The dry cave-like interior has preserved the remains to such a degree
that some bodies even have tiny finger nails and eye brows. I have
returned since then to document the find as much as possible. On one
particular occasion I was shocked to discover that some attempt had been
made to reseal the barrow, but by whom?

The site appears to be a burial ground for fairy folk and the exact
location of the find has not been revealed and no further remains have
been removed from the mound. It has not been substantiated how long the
remains have been there although the state of mummification would
suggest more than 400 years.

The countryside could be strewn with hidden burial mounds which have
lain undiscovered for centuries. How could such creatures exist without
detection for so many years? Cryptozoologists who have examined the
remains suspect they have evolved to suit their surrounding so well they
would be virtually invisible to the naked eye.

Their wings and skin pigment would camouflage them extremely well and
they would most probably live in the tree tops and rarely venture down
to ground level. In winter they would probably retreat underground into
cave networks.Whether they still exist is another question but the
remains found in Derbyshire have laid thousands of years of folklore to
rest.

Whoa thanks purps how cool is that info!! I choose to believe it is real!!

That is so very cool!!! I also choose to believe it is real!

OUT OF MIND » TRUTH IN CONSPIRACY THEORIES? » HISTORIES MYSTERIES » Here you go Nannee! - Experts Confirm the Mummified Remains of Faeries

» Gaia Faeries return in fullness to the planetary surface
» DNA Results of the Nazca Tomb ‘Mummified Aliens’ are in
» Mummified Swedish Bishop Had Baby Tucked Under His Feet
» My just for you Pic Nannee
» Chevron Deposits, Mummified Seals and Earth Crust Displacement