Citizens Disclosure Hearings and Mass Media Coverage Wed May 08, 2013 7:28 am


From The New York Times:


Visitors From Outer Space, Real or Not, Are Focus of Discussion in Washington

WASHINGTON — While President Obama was promoting an immigration
overhaul in Mexico, six former members of Congress gathered two blocks
from the White House to consider what they see as the enforced
government secrecy surrounding another kind of visitor: the kind who
come from a lot farther away. 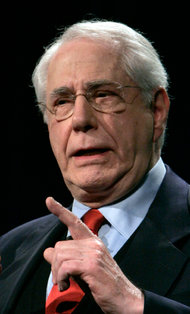 
Mike Gravel, a former senator from Alaska, above in 2007, appeared this week on a panel to discuss extraterrestrial life.

Every day this week, the former legislators presided over panels made
up of academics and — former, of course — government and military
officials, who were there to discuss their research or their own
eyewitness accounts of unidentified flying objects and the
extraterrestrials who presumably would have occupied them.

“Something is monitoring the planet, and they are monitoring it very
cautiously, because we are a very warlike planet,” said Mike Gravel, a
former Democratic senator from Alaska who ran in both the Democratic and
Libertarian presidential primaries in 2008.

Mr. Gravel and his fellow panelists were assembled by the Paradigm Research Group,
which says it is committed to ending the government’s “truth embargo”
on the existence of extraterrestrial life. The lawmakers were there in
hopes that their presence and political credibility would be enough to
persuade Congress to take the issue seriously.

“I’ve been exploring how we might get this issue out of the shadows
of the lunatic fringe,” said Roscoe G. Bartlett, a former Republican
representative from Maryland. Before his defeat last year, Mr. Bartlett
was known for sounding the alarm
on the threat posed to the nation’s energy infrastructure by
electromagnetic pulse, or EMP, the shock wave from a nuclear weapon
detonated beyond the earth’s atmosphere.

Called the Citizen Hearing on Disclosure, the event might have been mistaken as advocacy for government transparency, and some of the panelists had impressive résumés.

“I’ve come to understand and appreciate the importance of open,
transparent government and the power of truth,” said Paul T. Hellyer,
who served as Canadian minister of defense during the 1960s.

“We are not alone in the cosmos,” he added.

One reason the ex-members of Congress agreed to sit on the dais and ask questions may have been curiosity.

“Our country has trivialized it, has made it a joke, has made it
green people with horns sticking out,” said Carolyn Kilpatrick, a
Democratic representative from Michigan who lost her seat in 2010. “Now I
find that it’s much more than that. And it’s not a joke. And there is
scientific data that there may be something there.”

Another reason might have been the $20,000 the organizers said they
paid each panelist. But they are still maintaining a healthy skepticism.

“Just because the government might have had a document about how to
handle extraterrestrials doesn’t mean there were any,” said Merrill
Cook, a Republican from Utah who was twice elected to the House.

The panels this week have been low-hanging fruit for the news media
while President Obama is out of town and Congress is out of session, and
not all of the people who study U.F.O.’s think the meetings will help
them improve their stature in Washington.

“There really is something to this issue, and there is a serious side
to it, but that’s not what’s being presented as this event,” said Leslie Kean,
a journalist and author of “U.F.O.’s: Generals, Pilots and Government
Officials Go on the Record,” a collection of firsthand accounts by
people who believe they saw them.

The conclusion that U.F.O.’s are proof of extraterrestrial life is
misguided, she said, and the people who broadcast that belief hindered
support for real scientific research.

Despite the ridicule that usually accompanies the discussion of
U.F.O.’s, they have been quietly talked about in corridors of power
here. Some panelists at the event this week counted among true believers
John D. Podesta, a chief of staff in President Bill Clinton’s White
House, because of his role in Executive Order 12958, which requires the declassification of most government documents over 25 years old.

But the possible existence of extraterrestrial life is not exactly why he believes in government transparency, Mr. Podesta said.

“At the end of the day, there are going to be people who say that
even if you did that, there must be other files that exist that you’re
not disclosing,” he said in an interview.

But objects in the sky have piqued his interest. In June 2011, the
Center for American Progress hosted government officials, from the
Pentagon, NASA and the Department of Transportation, as well as
Congressional staff and former officials from intelligence
organizations, for a briefing by Ms. Kean and experts from academia and
foreign militaries.

The private briefing was organized to discuss a proposal that the
government establish a small office of two staff members who would
selectively investigate mysterious skyward sightings and seek to
understand them by applying scientific method. The proposal did not
refer to U.F.O.’s, but rather, U.A.P.’s, unidentified aerial phenomena,
as if those who drew up the proposal were keenly aware of how their
objective could be perceived.

“They were interesting, credible people who had observed aerial
phenomena that were unexplained and worthy of additional follow-up,” Mr.
Podesta said. “Going back and looking at and declassifying whatever
government documents exist is a smart thing to do.”

Note: Even though mainstream media coverage is very much
appreciated, they still approach the subject with a snide attitude and
plenty of spin. I was just as insulted as Senator Gravel at the
insinuation that panel members may have been bought for a $20,000 fee!

For myself, as a former Booking Agent I can personally
attest to the fact $20K is dirt cheap for an entire week, especially for
having to hear 40 hours of testimony. In 2004, booking speaking
engagements for Yolanda King (MLK Jr’s daughter), she commanded $25,000
plus hotel and travel expenses for simply a 2 hour engagement, much less
than the average booking fee for well known speakers.

Many former and current politicians retain fees of
$100-150K or more for a single speaking engagement, and many wiggle out
paying taxes as well.

Question: How often do you hear the mass media blatantly
using booking fees to sway public opinion? Now, if the panel members
were paid a half a million, that would be something to inform the public
about.

In addition The Times found it necessary to throw in
Leslie Kean’s adverse opinion, a very typical pattern for mass media
when approaching the subject of UFO’s / UAV’s.

Guest
Appreciated the comparison of fees; that gave me better perspective on how that should be viewed.

Guest
Re: The note at the end on MSM reaction... Who cares what MSM does anymore? They stopped doing their jobs a long time ago but still draw a nice fat paycheck for lying to us day after day about everything. Time to get over waiting for their Stamp of Approval to confer relevance to an event. They no longer matter and paying attention just gives them energy to continue. If everyone stopped listening to them, they would go away. It's time.