The Hall of Records has been mentioned in a number of books I have read,
based around the 2012 phenomenon. I think there is a lot of things the
public are not made aware of when discoveries like this are found. Of
course, there can be a lot of speculation with such situations as this,
but it sure is fascinating to think of what kind of information may turn
up in such places. 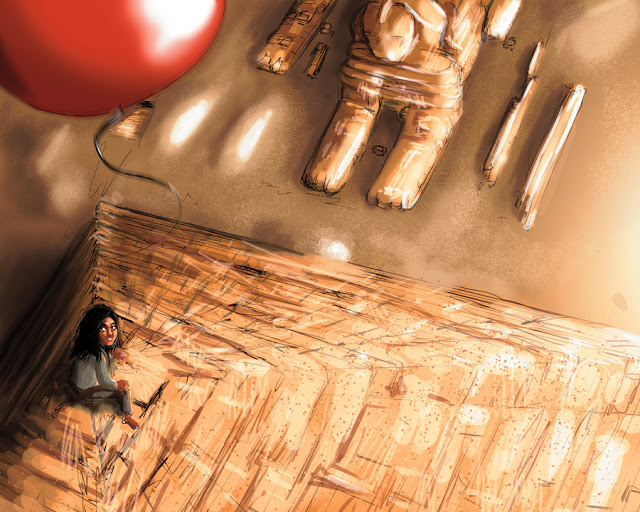 ['Forever Gone', by Davinxi on DeviantArt]
Via bubblews.com, 10 May 2013 -
Rumors are circulating throughout the world recently with the supposed
discovery of one of the legendary Hall of Records in Egypt. The Egyptian
government along with recently retired Zahi Hawass who ran the Egyptian
Antiquities Department have adamantly denied these claims saying that
no such building or chamber has been found. However, many researchers
and even some archaeologists are saying that the chamber was indeed
found but has been covered up due to the contents inside and what it
would mean to both our understanding of history and Ancient Egypt's
history.

According to legend and the reknowned psychic Edgar Cayce, the Hall of
Records are composed of three chambers spread throughout the world that
contain the missing history of the lost continent of Atlantis along with
the missing history of the human race. The three chambers are said to
be located in Egypt (underneath the Sphinx's paw), somewhere on the
Yucatan Peninsula and one on the lost continent of Atlantis, which would
be most likely sunken in the ocean depths still. Each chamber is
thought to contain the history of the lost continent of Atlantis along
with information on any of the surviving inhabitants of the legendary
island. It was Cayce's claim that there were small groups of survivors
that managed to escape the destruction of Atlantis and it was these
Atlanteans that brought civilization to both Egypt and Mexico. Cayce
claimed that all of this information would be housed in these Hall of
Records and would detail both the history before the destruction of
Atlantis and the demise too.

So, why would Egypt hide the Hall of Records? Obviously, the main reason
would be the knowledge that the Egyptians did not develop civilization
independently but instead were taught the concepts of it. This change in
thinking would make the ancient Egyptian culture not as sophisicated as
originally thought and all of their achievements would be questioned.
Buildings such as the Great Pyramid and Abu Simbel would have to be
questioned as to who was really responsible for the technology and ideas
behind the building of them. Even the Sphinx would have to be
questioned.

Where is the evidence for the finding of the Hall of Records in Egypt?
The first piece of evidence was found more than twenty years ago and was
a ground penetrating radar scan that revealed a strange anomaly
underneath one of the Spinx's paws. The scan revealed what appeared to
be a small chamber exactly in the location that Edgar Cayce had
predicted the Hall of Records was to be found. The second piece of
evidence and the most important are a network of caves and tunnels that
run all around the Giza plateau. When these caves and tunnels were first
discovered, both the Egyptian government and Zahi Hawass denied the
existence of them. The caves run underneath at least two of the three
large pyramids on the Giza plateau and run very close to right beneath
the Sphinx. It is this cave chamber that runs very close to the Sphinx
that the secret Hall of Records was located. The Hall was located behind
about 5 feet of rock that separated the end of the cave chamber to the
entrance of the Hall of Records. According to some sources,
archaeologists were able to drill through and clear this 5 feet of rock
and have gained access to the hall. But other sources are saying that
once the archaeologists realized what they had found, they further
sealed the cave chamber thereby hiding the discovery.

So, has the Hall of Records really been discovered? And, if so, will we
ever hear about the contents of what the chamber had inside it? My guess
is that the Egyptian government will do everything they can to hide
this discovery and unless they are forced to disclose, we will never get
confirmation. Hopefully, I will be proven wrong.

For more information on the cave system please visit this site: www.viewzone.com/pyramidcavesx.html