OUT OF MIND » THE INSANITY OF REALITY » FINANCIAL COLLAPSE » The Mad Science of the National Debt ~ Matt Taibi, The Rolling Stone

The Mad Science of the National Debt ~ Matt Taibi, The Rolling Stone

With Congress gridlocked by the debt-ceiling debate, the Federal
Reserve is conducting a radical experiment with the American economy 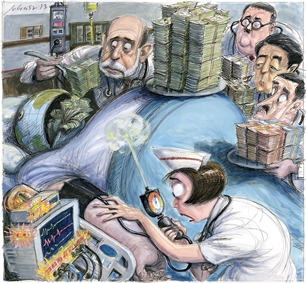 [color:e0e9=#000]Welcome back to the dumb season. It’s debt-ceiling time again.

We’ve been at this two years now. It was back in 2011 when the
Republican Party, seized by anti-government furor, first locked on the
lifting of the federal debt ceiling – an utterly routine governmental
mechanism that allows the Treasury to borrow to pay for spending already
approved by the entire Congress, Republicans included – as a place to
hold a showdown over . . . government spending. That first battle
resulted in a “Mutually Assured Destruction”-type stalemate, in which
both parties agreed that if they couldn’t reach a deal by New Year’s Day
2013, a series of brutal, automatic, across-the-board spending cuts
would take effect. At the time, it seemed unthinkable Congress would let
that happen. By the time we passed that date, the thing that seemed
unthinkable was the idea that Congress would ever make a deal. The cuts
took effect in March and we were headed for a full-on fiscal crash on
May 19th, when fate intervened to stop this stupidest-in-history
blue-red catfight in its tracks, if only temporarily.

In early May, Treasury Secretary Jacob Lew announced that the federal
government suddenly had enough cash on hand to stay afloat until “at
least Labor Day.” We were saved by, of all things, a record quarterly
profit from the notorious state-seized mortgage-finance company Fannie
Mae, which is paying the state $59 billion, enough to keep us in the
black through the summer.

But this reprieve is only for four months, and if anything, the
latest stay of execution only underscores the utter randomness and
imbecility of our political situation. If the one thing preventing
Washington from seizing up in fatal gridlock for even a brief spell is a
surprise burst of good fortune from a bailed-out financial zombie like
Fannie Mae, we’re screwed. The only thing that will rescue us from
having to go through this over and over again from now until the end of
time is for our increasingly polarized Congress to come to some broad
agreement on tax hikes and spending cuts – the kind of routine deal that
now seems politically impossible.

That leaves us in a state of permanent paralysis that is at once more
dangerous and even more stupid than the time the business of our entire
nation ground to a halt over a blow job. Americans at least know what a
blow job is, and they understood how the white stuff got on the dress.

But the national debt? Nobody understands it, and anyone who tells
you he or she does is almost certainly lying. In fact the supreme irony
of this endless controversy over spending and austerity is that it has
pushed the Federal Reserve as well as major European and Asian central
banks, especially recently, to bypass the ignorant arguing public and
take dramatic interventionist action on their own, tinkering with the
world money supply in ways that are highly experimental and have no
parallel in modern times. By all rights, this should be stimulating a
profound debate around the industrialized world about who controls the
process of money creation and about the role of government/central banks
in the economy, but here in the U.S., that is exactly the debate we’re
mostly not having.

The debate we are having is childish, irrelevant and
self-destructive, as has been proved by all the recent developments on
the debt front, including:

[color:e0e9=#000]Here’s
a quick and easy rule: any time any politician, pundit, TV talking head
or self-proclaimed financial expert starts comparing the U.S. federal
budget to anything other than the U.S. federal budget, that person is
automatically full of shit and should be instantly voted off the
conversational island, if not outright beheaded.

This whole debt debate really began devolving in earnest into total
mindlessness once people like Oklahoma Republican Sen. Tom Coburn
started likening the government spending deficits to family budgets,
pushing to “make Congress live under the same rules as families across
the country and treat the federal budget like the family budget.
Families have to live in their means and so should Congress.” Not paying
our government obligations, Coburn said recently – remember, this is a
U.S. senator talking – might be a “wonderful experiment.”

Comments like these led to Tea Party protesters descending upon
Washington screaming about how not raising the debt ceiling is like
giving your kids the bad news that they can’t afford to go to the movies
– difficult but necessary, a kind of homespun tough love, except that a
global superpower intentionally defaulting on its sovereign debt is
actually way closer to an act of apocalyptic suicidal madness than it is
to good parenting. (“It would be the financial-market equivalent of
that Hieronymus Bosch painting of hell,” said JPMorgan Chase chief U.S.
economist Michael Feroli.)

Still, the mere fact that the Republicans made such hay with the
household analogy forced politicians and economists on the other side of
the aisle to respond with similar oversimplifications, in what amounted
to a desperate attempt to plant their own flags in the growing mountain
of popular anti-knowledge. Even Fed chairman Ben Bernanke has reached
for household analogies in his efforts to explain what a default would
mean. “This is sort of like a family saying, ‘Well, we’re spending too
much – let’s stop paying our credit card bill,’” Bernanke said.

The next agonizing step was the Republican constituency’s slow
realization that “not paying our bills” is bad. This should have
actually been a good thing. But it only led to this month’s latest
harebrained idea: the so-called Full Faith and Credit Act, a Republican
bill passed in the House that would direct the U.S. Treasury, in the
event that we hit the debt ceiling, to pay interest to bondholders
before making any other payments. In other words, we’d pay people who
loaned us money by buying treasuries – China’s, for instance – before
we’d pay, say, veteran benefits or Medicare.

Note:
Please remember, this body of work is only possible with the kindness,
compassion and generosity of readers. If information here enriches your
life, or if you profit from posting blog content, please consider
gifting a small donation to help meet expenses. It’s important we
remember that gifting brings more abundance into our lives, by honoring
an energetic exchange with those those who freely and unconditionally
sacrifice their lives in Service to the Collective. Mahalo! Love and
gratitude, ~A~}

OUT OF MIND » THE INSANITY OF REALITY » FINANCIAL COLLAPSE » The Mad Science of the National Debt ~ Matt Taibi, The Rolling Stone