Reports of ‘UFO’ flood in from Toogoom, Australia

Reports of ‘UFO’ flood in from Toogoom, Australia

Via sunshinecoastdaily.com.au, 22 May 2013 - UP TO a dozen people have reported seeing a strange light in the sky over Toogoom on Monday evening.

Toogoom resident Maggie MacLeod sparked the influx of reports yesterday
when she posted about the "bright, comet-like" UFO on the Fraser Coast
Chronicle Facebook page. 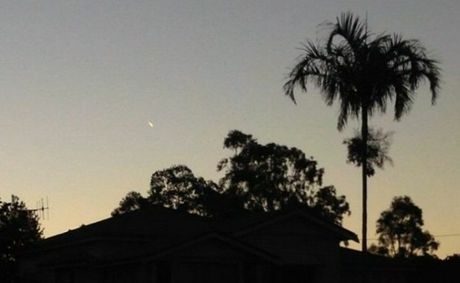 This image of the unidentified flying object was was captured by
reader Chelly Milzewski on Saltwater Creek Rd in Maryborough about
5.20pm on Monday.

"It was going down, then sideways and then the tail disappeared," she said.

"I went up to a group of people on the beach and pointed it out to them
... by this time it was a big red ball in the sky near where the sun had
set.

"It was virtually staying still ... before all of a sudden, the tail came out and it shot off and disappeared.

"It did not fade as one would expect after viewing it for 40 minutes."

Maryborough's Chelly Milzweski reported seeing "what appeared to be a
burning flame" on the horizon towards Hervey Bay and captured it on
camera.

Penlan Lassy from Urraween also saw it and described it as a "bright
light moving quickly with a small trail" that was "too small to be a
plane".

A few suggested the UFO could have been a high-level plane with vapour trails or space junk entering the atmosphere.

Posts : 8269
Join date : 2012-10-03
Age : 54
Location : Australia
Yeah my hubby has seen them when we lived further out and he worked at a gold mine, they seemed to hover around the mine a lot he said and one followed him home from work very late one night, he flogged it all the way home he said LOL! That was about 12 years ago!

Posts : 8269
Join date : 2012-10-03
Age : 54
Location : Australia
Oh pfft LOL he still has a really old Nokia that came out with Noah!! He doesn't know how to do pics LOL He doesnt' work there anymore he works for Landcare now, it's so strange he used to kill trees and weeds etc for a living and now he works for the greenies lol!

» Queensland, Australia getting so many vaccine injury reports that Queensland Health has announced it can’t keep up
» 100 year flood in Flagstaff AZ - Eerie Tsunami Spain - *Florida Flood Improving*
» Eartquake Reports: 3 reports from Guatamala,Vancouver Island and California
» No 271 – OPPT-IN AUSTRALIA: Open Letter to the Prime Minister and the Ministers of THE  GOVERNMENT OF AUSTRALIA
» Tartaria Mud Flood