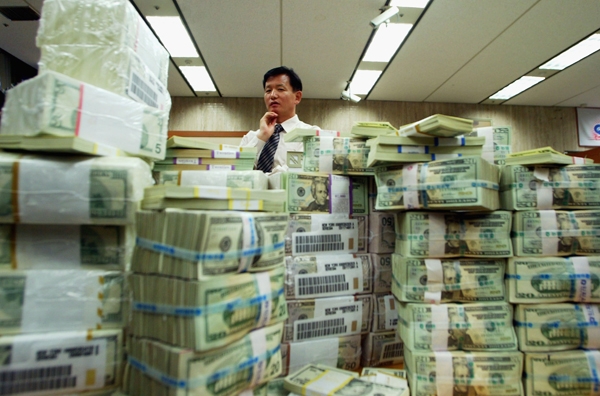 A foreign exchange banker.  (Chung Sung-Jun/Getty Images)
I’ll get into this in more detail later (I’m on deadline for a magazine feature), but this story just landed. Given the LIBOR story, the Interest Rate Swap manipulation story, the Euro gas price manipulation story, the U.S. energy price manipulation story, and (by now) countless others of the “Everything is Rigged” variety, this screams out for immediate notice. Via Bloomberg:
Traders at some of the world’s biggest banks manipulated benchmark foreign-exchange rates used to set the value of trillions of dollars of investments, according to five dealers with knowledge of the practice . . .
Employees have been front-running client orders and rigging WM/Reuters rates by pushing through trades before and during the 60-second windows when the benchmarks are set, said the current and former traders, who requested anonymity because the practice is controversial. Dealers colluded with counterparts to boost chances of moving the rates, said two of the people, who worked in the industry for a total of more than 20 years.
This time the rates allegedly being rigged are in the foreign-exchange or “FX” markets, meaning that if this story is true, it would almost certainly trump LIBOR for scale/horribleness.
As one friend of mine who works on Wall Street put it, “It’s endless! This is the biggest market in the world.” Bloomberg suggested the story is just the tip of the iceberg:
“The FX market is like the Wild West,” said James McGeehan, who spent 12 years at banks before co-founding Framingham, Massachusetts-based FX Transparency LLC, which advises companies on foreign-exchange trading, in 2009. “It’s buyer beware.”
The $4.7-trillion-a-day currency market, the biggest in the financial system, is one of the least regulated. The inherent conflict banks face between executing client orders and profiting from their own trades is exacerbated because most currency trading takes place away from exchanges.
Again, more on this later. But the key thing here is the, uh . . . well, the consistent leitmotif of all these stories. One after another, it’s the same thing: Insiders rigging benchmark rates, shaving money from basically everyone on earth, systematically and over periods of many years. It’s the ultimate taxation-without-representation story – crazy stuff.
Related Everything Is Rigged: The Biggest Price-Fixing Scandal Ever
www.rollingstone.com / link to original article

Posts : 1827
Join date : 2012-02-15
Age : 66
Location : Ct
You and I know Prups that 99.9% of everything we see is rigged. Its the masses that dont understand the corruption that is occuring in front of everyones eyes. Stories like this come and go yet no one seems to stand up and say enough is enough. My friends who challenge our gov through the courts have had enough even though they have had tremendous success. They understand that they cannot do this alone. The American people at this point WILL NOT stand up for themselves, and it doesnt look good in the future...Tragic is the only word I can think of....

Rolling Stone was a bastion of truth back in the day when it started. Matt Taibbi has been trying to bring it back around to what it once was it seems. So whenever he puts stuff out I am going to spread it far and wide. We all should. Until they take the net down we can use the hell out of it.  They can monitor us all they want! Screw em!! 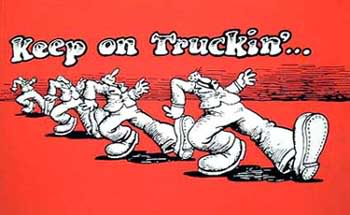 I just love the art of R. Crumb! Never get tired of looking at it. I saw a doc on him and his brother. Sad and fascinating they are. Genius so often is.

Guest
THink this might have something to do with the delay in rv??  Trying to minimize this, perhaps?

trying to be as positive about this as I can be...

Topspin said: "... My friends who challenge our gov through the courts have had enough..."  have to consider myself in this group, & it was this process that awakened and enlightened me to the depth of rabbit hole, so I must be thankful for same-  for how my character has been built therefrom.

Out of every adversity are the seeds to an equal or greater benefit...