OUT OF MIND » THE INSANITY OF REALITY » GOVERNMENTS & THE NEW WORLD ORDER » Revealed: Top Secret Rules Allowing NSA to Spy Without Warrant 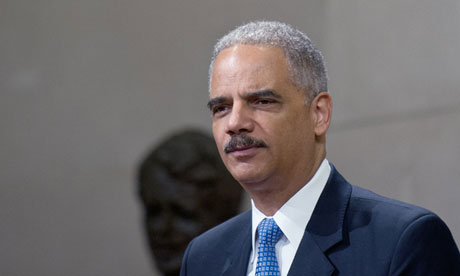 Holder’s ‘minimization procedure’ says once a target is confirmed to be in the US, interception of communication must stop. Photo: Nicholas Kamm/AFP/Getty Images
A separate section of the same document notes that as soon as any intercepted communications are determined to have been between someone under US criminal indictment and their attorney, surveillance must stop. However, the material collected can be retained, if it is useful, though in a segregated database:
“The relevant portion of the communication containing that conversation will be segregated and the National Security Division of the Department of Justice will be notified so that appropriate procedures may be established to protect such communications from review or use in any criminal prosecution, while preserving foreign intelligence information contained therein,” the document states.
In practice, much of the decision-making appears to lie with NSA analysts, rather than the Fisa court or senior officials.
A transcript of a 2008 briefing on FAA from the NSA’s general counsel sets out how much discretion NSA analysts possess when it comes to the specifics of targeting, and making decisions on who they believe is a non-US person. Referring to a situation where there has been a suggestion a target is within the US.
“Once again, the standard here is a reasonable belief that your target is outside the United States. What does that mean when you get information that might lead you to believe the contrary? It means you can’t ignore it. You can’t turn a blind eye to somebody saying: ‘Hey, I think so and so is in the United States.’ You can’t ignore that. Does it mean you have to completely turn off collection the minute you hear that? No, it means you have to do some sort of investigation: ‘Is that guy right? Is my target here?” he says.
“But, if everything else you have says ‘no’ (he talked yesterday, I saw him on TV yesterday, even, depending on the target, he was in Baghdad) you can still continue targeting but you have to keep that in mind. You can’t put it aside. You have to investigate it and, once again, with that new information in mind, what is your reasonable belief about your target’s location?”
The broad nature of the court’s oversight role, and the discretion given to NSA analysts, sheds light on responses from the administration and internet companies to the Guardian’s disclosure of the PRISM program. They have stated that the content of online communications is turned over to the NSA only pursuant to a court order. But except when a US citizen is specifically targeted, the court orders used by the NSA to obtain that information as part of Prism are these general FAA orders, not individualized warrants specific to any individual.
Once armed with these general orders, the NSA is empowered to compel telephone and internet companies to turn over to it the communications of any individual identified by the NSA. The Fisa court plays no role in the selection of those individuals, nor does it monitor who is selected by the NSA.
The NSA’s ability to collect and retain the communications of people in the US, even without a warrant, has fuelled congressional demands for an estimate of how many Americans have been caught up in surveillance.
Two US senators, Ron Wyden and Mark Udall – both members of the Senate intelligence committee – have been seeking this information since 2011, but senior White House and intelligence officials have repeatedly insisted that the agency is unable to gather such statistics.
RELATED POSTS:
Turnkey Tyranny
NSA Whistleblower Edward Snowden
Treasonous U.S. NSA Now Totally Exposed
Breaking: New PRISM Slide Leaked By The Guardian

OUT OF MIND » THE INSANITY OF REALITY » GOVERNMENTS & THE NEW WORLD ORDER » Revealed: Top Secret Rules Allowing NSA to Spy Without Warrant

»  Arrest warrant HAS been issued for George Bush Sr. This is a global warrant
» Secret Mysteries of the Sun Revealed
» Secret Brotherhoods Revealed
» FISA Court Judge James Boasberg Rules Comey Memos Will Remain Secret…
» All that has been kept secret is starting to be revealed, shocking many of you