Topographic map of Veniaminof, showing the margin of the caldera (red dashed line) and the active cone within the caldera (black circle). The current eruption (June 2013) has produced a small lava flow (less than 1/2 mile long as of June 18) down the flank of the active intra-caldera cinder cone. Veniaminof’s caldera is 5-6.8 miles in diameter.
Citation Information:
Image courtesy of the AVO/UAF-GI.
Please cite the photographer and the Alaska Volcano Observatory / University of Alaska Fairbanks, Geophysical Institute when using this image.
….
….
Volcano Activity in USA on Tuesday, 11 June, 2013 at 16:07 (04:07 PM) UTC.
Back
….
KDLG
Veniaminof Volcano Lava Flows 1/3 Mile into Caldera
By Ben Matheson 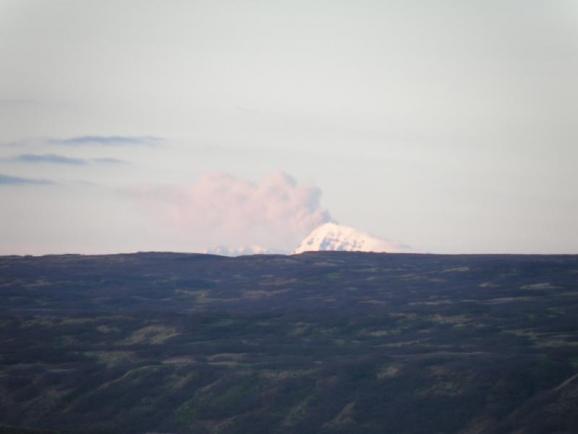 Enlarge image
Credit Bob Murphy / Alaska Volcano Observatory
Eruption plume from Veniaminof, viewed from Port Moller on June 13, 2013
The lava flow from the Veniaminof volcano now extends nearly a third of a mile down the volcanic cone, while ash puffs are reaching up to 15 thousand feet.  The lava flow is about 160 feet wide, stretching about down the cone into its enormous caldera full of glacial ice.  There the super hot lava is melting some snow and ice according to UAF’s Jessica Larsen, the Acting Coordinating Scientist for the Alaska Volcano Observatory.
“This is a really large caldera, there’ s a lot of snow and ice in there.  I would suspect that from a lava flow of this size, the amount of meltwater is probably pretty small,” said Larsen.
Scientists don’t expect the lava flow to go beyond the base of the cone within the caldera. This is the first time in 20 years that Veni has spewed out lava.  In past eruptions, like 1984 and 1993 there was no sign of increased flow into the Muddy River Valley.
“It’s possible when you have these lava flows that interact with glacial ice or snow, they’ll melt the snow or ice and create a lahar, which is an Indonesian word that means mudflow, originating on the flank of a volcano, it’s like a muddy flood.  At this point, we don’t have any observations of lahars being created, but it’s possible that this could create some meltwater which would then create a lahar,” said Larsen.
Read More  Here
….
ALASKA VOLCANO OBSERVATORY WEEKLY UPDATEFriday, June 21, 2013 12:56 PM AKDT (Friday, June 21, 2013 20:56 UTC)
VENIAMINOF VOLCANO (CAVW #1102-07-)
56°11’52″ N 159°23’35″ W, Summit Elevation 8225 ft (2507 m)
Current Volcano Alert Level: WATCH
Current Aviation Color Code: ORANGE
The eruption of Mount Veniaminof volcano which began on June 13 continues. Satellite images showed intense elevated surface temperatures consistent with lava effusion at the cinder cone inside the caldera throughout the week. Seismic tremor continued throughout the week. On June 18, small, short lived ash bursts rising to less than 15,000 ft were seen in clear images from the FAA web camera in Perryville. On June 19, residents in Sandy River reported seeing ash bursts from the volcano rising to 10,000-15,000 ASL and blowing to the northeast. The volcano was obscured by weather in web camera images for the rest of the week and it is possible that ash bursts continue and are undetected. Refer to the NWS Alaska Aviation Weather Unit (http://aawu.arh.noaa.gov/) for updates on SIGMETs related to ash emissions.
Recent satellite images continue to show intense elevated surface temperatures at the cinder cone inside the caldera and seismic tremor continues. The seismic network at Veniaminof is not fully functional compared to that operating during the last eruption (2005), so the accuracy with which we can interpret ongoing seismicity is diminished.
Technical problems temporarily disabled the real-time seismic data feeds from Veniaminof on Wednesday, June 19, and were resolved within a few hours, restoring the data stream.
Recent eruptions of Veniaminof volcano have all occurred from vents located on the cinder cone inside the caldera and were characterized by brief bursts of ash emission and small explosions. Ash plumes associated with this type of activity are typically diffuse and generally do not reach more than 20,000 feet above sea level. Ash fallout is typically limited to the flanks of the volcano. Minor emissions of steam and ash may persist for for weeks to months. The current lava flow is expected to remain within the confines of the caldera. There is a possibility that activity at the volcano could increase with little to no warning.
Mount Veniaminof volcano is an andesitic stratovolcano with an ice-filled 10-km diameter summit caldera located on the Alaska Peninsula, 775 km (480 mi) southwest of Anchorage and 35 km (22 mi) north of Perryville. Veniaminof is one of the largest (~ 300 km3) and most active volcanic centers in the Aleutian Arc and has erupted at least 13 times in the past 200 years. Recent significant eruptions of the volcano occurred in 1993-95 and 2005. Both were moderate Strombolian eruptions producing intermittent low-level jets of incandescent lava fragments, and low-level emissions of steam and ash from the main intracaldera cone. During the 1993-95 activity, a small lava flow was extruded into the summit caldera ice field producing an ice pit. Minor ash-producing explosions occurred in 2002, 2004, early 2005, November 2006, and February 2008. Previous historical eruptions have produced ash plumes that reached 6,000 m (20,000 ft) above sea level and ash fallout that blanketed areas within about 40 km (25 mi) of the volcano.