[/font][/color]
You’re going to want to use every share button at the bottom of this article once you’re done reading, so get ready, it’s time to freak out:  Maybe.
If you live on the west coast of Canada or theUnited States, you’re pretty much already screwed at this point thanks to the Japanese earthquake and tsunami of 2011.  Radiation levels are already increasing in the food and water, babies born with thyroid issues linked to radiation are rising quicklyand governments in Canada and the United States are raising the “acceptable levels” of certain toxic substances in the food being shipped in from Japan. 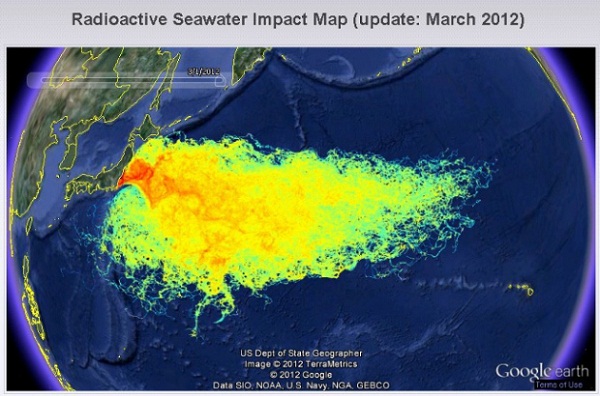 This isn’t a conspiracy theory, this is happening and it’s happening right now.
The fancy little picture at the top of the article isn’t showing you the flow of happy fun time thoughts from Japan back in March of 2012, it’s showing you the flow of radiation from the Fukushima nuclear plant afterthe devastating earthquake and tsunami of 2011.  Yes, that sharp pain you just felt in your chest is thesudden realization that the image shows the radiation reaching almost past Hawaii more than a year ago.

Do the math – If that radiation screamed across the Pacific Ocean that far in one year, just how far do you think it has gotten since then?  Look at what World Truth TV is saying and then you decide.

Samples of milk taken across the United States have shown [b style="margin: 0px; padding: 0px; font-style: normal;"]radiation at levels 2000 percent higher than EPA maximums. [/b] The reason that milk is so significant is that it is representative of the entire food supply.  According to an article published on Natural News, “Cows consume grass and are exposed to the same elements as food crops and water supplies. In other words, when cows’ milk starts testing positive for high levels of radioactive elements, this is indicative of [b style="margin: 0px; padding: 0px; font-style: normal;"]radioactive contamination of the entire food supply.”[/b]
The  Food and Drug  Administration and the Environmental Deception Protection Agency, instead of refusing to prohibit the sale of tainted foods and mandatory testing of foods produced and harvested from the Pacific Coast, have simply raised the “acceptable levels”  of radioactive material in foods.

If that doesn’t scare the ever-living crap out of you, then take a look at the list of foods you are now supposed to be wary of, you know, for only the next 30,000 years.

I don’t know about the rest of you, but that one way trip to colonize Mars is looking pretty damn attractive right now.

Guest
Maybe this is why Kauilapele left Hawaii.

Posts : 5185
Join date : 2012-01-01
Maybe!? Although, I do remembering reading something from a good galactic stating that all of that has been cleaned up. Not sure about anything anymore, but do know that I have noticed that there have not been very few if no chemtrails in the sky, again something that they have stated that they were cleaning up and putting a stop to.

Guest
The chemtrails have abated here as well, but I've been fooled before. They spray depending upon what storm systems are heading where to change how the water is held or dropped as rain and hail. I know how it works here in the Pacific Northwest, if there is a storm system coming from the Pacific, they are out in force, but I don't know their plan in other areas of the world. If you are on Facebook there is a site called Chemtrail Awareness where people post photos of the chemtrails in their area. They are still spraying heavily in parts of the world now. On a good note, I have read that the sky elementals called sylphs follow behind and clean up the air and I have seen them in action. They are whispy clouds always in the shape of either an angel or a bird (often like the shape of your parrot avatar!) and if you are having chemtrails you can call them (provided you BELIEVE, as Peter Pan told us) and they will come. They work in Gaia's service, just like all the other elementals. I have called them and they have come and I always send them loads of love and gratitude.

Guest
Herb Lady, here is a photo I took of a slyph in the sky over my house. 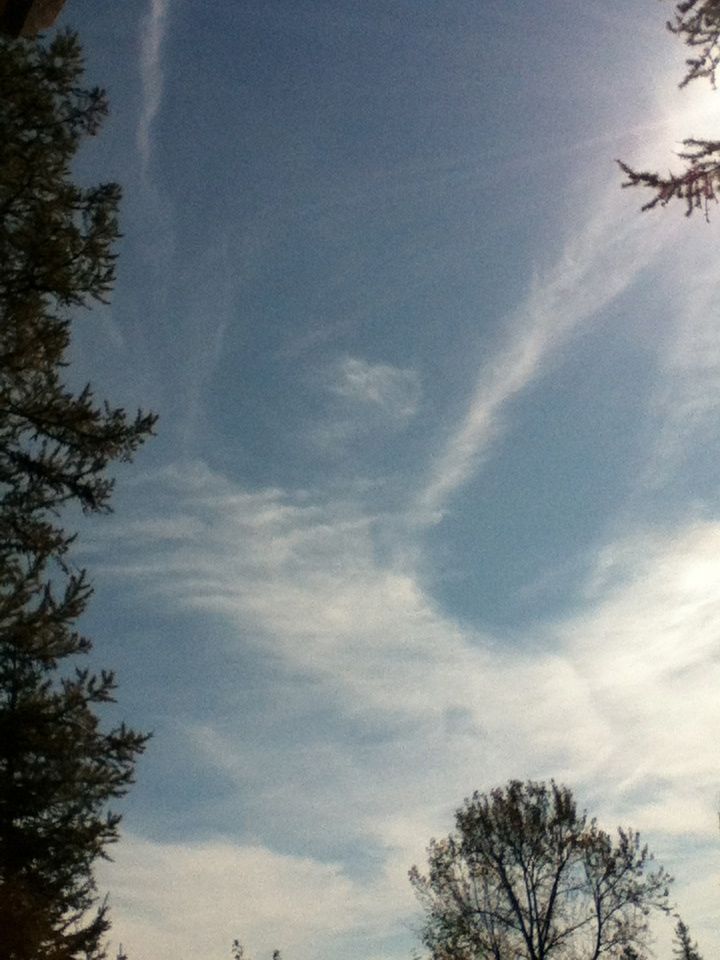 Guest
is the word slyphs or sylphs? I see it both ways above & appreciate clarification & pronunciation, also. Beautiful photo, also, Ravens :)

Guest
Sorry, that's Raven in a hurry. It's sylph.