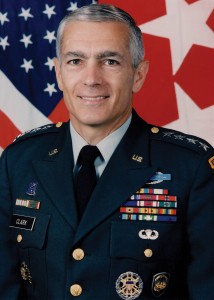 Once a warrior, always one. Clark hasn’t forgotten. His credentials are notorious. He’s a war criminal. He’s also a whistleblower. More on that below.
He formerly commanded NATO. From March 24 – June 19, 1999, he led naked aggression against Yugoslavia. For 78 days, hundreds of warplanes attacked mercilessly. About 3,000 sorties were flown.
Thousands of tons of ordnance were dropped. Hundreds of ground-launched cruise missiles were used.
Nearly everything was struck. Massive destruction and disruption followed. An estimated $100 billion in damage was caused. A humanitarian disaster resulted. Environmental contamination was extensive.
Many thousands were killed, injured or displaced. Two million people lost livelihoods. Homes and communities were destroyed.
Lawless aggression was called humanitarian intervention. It was prelude for worse to come.
An avenue to Eurasia was opened. A permanent US military presence was established. America’s imperium claimed another trophy. It had many others in mind.
It did so at the expense of mass killing and destruction. Clark’s a retired four-star general. He’s a Presidential Medal of Freedom recipient. He received numerous other awards. They include honorary knighthoods. America and complicit allies honor their worst.
Clark’s at it again. On June 17, he headlined his New York Times op-ed “To Get a Truce, Be Ready to Escalate.” More on that below.
On October 3, 2007, Clark spoke at San Francisco’s Commonwealth Club. He said America underwent a post-9/11 transformation. A “policy coup” occurred. With no public debate or acknowledgement, hardliners usurped power.
Ten days post-9/11, he visited Defense Secretary Rumsfeld. They met at the Pentagon. “No one will tell us where or when to bomb”, he was told. Military commanders said Iraq will be attacked.
“I walked out of there pretty upset,” said Clark. On a second visit, he learned more. He was told plans were to “destroy the governments in seven countries.” Besides Afghanistan, Iraq, Syria, Lebanon, Libya, Somalia, Sudan, and Iran would be targeted.
He knew a decade earlier. In 1991, he wore one star. He visited Under Secretary of Defense Paul Wolfowitz. He did so at the Pentagon. They met after Operation Desert Storm.
He was stunned by what he heard. America intended multiple premeditated wars. Policymakers want the Middle East destabilized. They want it redrawn. They want it turned upside down.
They want unchallenged US control. They want America’s military might used destructively. They want it used “to start wars and change governments. It’s not to deter conflicts,” said Clark. It’s not about liberation and spreading democracy.
Wolfowitz said “we should have gotten rid of Saddam Hussein….But one thing we did learn. We can use our military anywhere in the Middle East and the Soviets won’t stop us.”
“And we’ve got about five or 10 years to clean out those old Soviet client regimes.” He named Syria, Iran, and Iraq. He suggested other countries. He called multiple wars essential “before the next great superpower comes along to challenge us.”
In his book, “Winning Modern Wars,” Clark discussed what’s explained above. Did Congress debate it, he asked? Did presidents explain it? Did America’s media report it? “Was there a full-fledged (public discussion)? Absolutely not, and there still isn’t.”
“And what about the real sources of terrorists – US allies in the region like Egypt, Pakistan, and Saudi Arabia?”
“Wasn’t it repressive policies of the first, and the corruption and poverty of the second, that were generating many of the angry young men who became terrorists?”
“And what of the radical ideology and direct funding spewing from Saudi Arabia?”
“It seemed that we were being taken into a strategy more likely to make us the enemy – encouraging what could look like a ‘clash of civilizations’ – not a good strategy for winning the war on terror.”
“And that’s why we’re failing,” he added. Perhaps he forgot his earlier assessment. It doesn’t surprise. He’s a warrior, not peacemaker. He’s trained to kill and destroy.
He was 1966 West Point valedictorian. He’s smart enough to know better. He claims “open(ing) an opportunity for concerted diplomacy” and peace depends on war.
Orwell said it better saying “war is peace.” According to Clark, ravaging Yugoslavia showed US-led NATO’s “resolve to escalate.” He stopped short of explaining mass killing and destruction.
He ignored his direct responsibility. He was silent on premeditated naked aggression. He’s mindless about Yugoslavia’s dismemberment. He said nothing about exploitive neoliberal harshness. He’s unconcerned about human misery.
Bring it on. Replicate Yugoslavia’s ravaging. “(I)naction is not an option,” he said. He called 1999 “a limited NATO air campaign.” He claimed it followed “failed” diplomatic talks. He lied on both counts.
Yugoslavia was balkanized and destroyed. According to Michael Parenti, it was “turn(ed) into a privatized, deindustrialized, recolonized, beggar-poor country of cheap labor, defenseless against capital penetration, so battered that it will never rise again, so shattered that it will never reunite, not even as a viable bourgeois country.”
“When the productive social capital of any part of the world is obliterated, the potential value of private capital elsewhere is enhanced – especially when the crisis faced today by western capitalism is one of overcapacity.”
Yugoslavia’s productive capacity was destroyed. Doing so “extend(ed) the monopolizing dominance of the western media (supported) cartels.”
“The aerial destruction of Yugoslavia’s social capital served that purpose.” Serbia’s valued underground water was contaminated. Surrounding areas are affected.
At the time, Clark boasted about his accomplishments. He succeeded in “demolish(ing), destroy(ing), devastat(ing), degrad(ing), and ultimately eliminat(ing) (Yugoslavia’s) essential infrastructure.”
Human carnage didn’t matter. It doesn’t now. Escalate, urges Clark. Peace depends on war. Wage it while conducting diplomacy, he urges.
Suggesting it reflects oxymoronic reasoning. It’s hegemonic, ruthless and unprincipled. It’s lawless aggression. Clark wants conflict ended by force. Once a warrior, always one.
He wants Assad ousted. He wants Syrians having no say. He wants paramilitary peacekeepers occupying Syria. He wants its military disarmed.
He wants US client state puppet leadership replacing sovereign Syrian independence. He says doing so will “halt Syria’s agony.”
He calls war the road to peace. What else would a four-star warrior say? Especially an American one. Imperial priorities alone matter. Clark didn’t become NATO commander ignoring them.