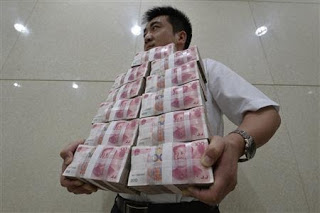 
An employee carries bundles of 100 yuan Chinese bank notes to store after counting at a bank in Taiyuan, Shanxi province July 4, 2013. REUTERS-Jon Woo

By Samuel Shen and Michael Flaherty

SHANGHAI/HONG KONG | Mon Jul 8, 2013 6:39pm EDT
(Reuters) - Wang Zhiyong, the founder of a Shanghai-based gift card company, tried twice to get a bank loan for his business and failed both times.

So Wang turned to China's vast network of alternative lenders, opting for a so called "curb side" loan. Such a loan is just one segment of the country's shadow banking system, which includes pawn shops, credit guarantee firms, trust companies and other mechanisms as sources of funds for Chinese borrowers.

"Banks never lend a hand to start-ups like us," said Wang, 40. "They only go after big companies and state-owned firms."

The dearth of bank credit available to China's millions of small to mid-sized companies is expected to tighten as authorities seek to rebalance the world's second-biggest economy.

The crackdown, however, only reinforced the dependency of many of China's non-state backed enterprises on the shadow banking industry.

Fitch says some 36 percent of outstanding credit in China, or 34 trillion yuan ($5.55 trillion), lies outside banks' loan portfolios, a huge pool of money which market participants find difficult to track and which could cause an ugly credit mess in a steeper slowdown.

Beijing now faces the difficult task of trying to re-direct a non-bank financing system - created by the government's own lending policies - that has helped keep its economy humming.

"Shadow banking activities have increased because China needs growth, and the banking sector has to a significant degree failed in its role of financial intermediary," Credit Suisse said in a February research note.

For Wang, the greeting card company founder, tapping the shadow banking industry was his only option, given that banks usually do not lend to small enterprises and the stock and bond markets in China are virtually shut.

He received a 5 million yuan, six-month loan from the curb side lender, which charged him an annualized interest rate of 14 percent, or about twice as much as a bank loan.

The term shadow banking refers to any financing provided by a non-bank entity.

The benefits of such a system are that it has allowed China to liberalize its state-mandated interest rate policy - albeit in an unorthodox manner. It's also promoted a diversification of funding mechanisms inside the country.

The risks come from building a system of credit largely out of view of regulators and also one without a control mechanism to assess if borrowers are even credit worthy. China, for example, has never had a corporate bond default, and analysts question whether risk is being priced appropriately.

China's shadow banking boomed after a 2010 directive from Chinese authorities to restrict the flow of bank loans. Beijing was worried that the waves of loans prompted from a 2008 stimulus package was pushing up inflation, among other concerns. Banks could lend to state-backed companies, but most of China's other corporations would have to find other methods of accessing capital.

On the flip side, it also includes so called "wealth management products," which are short term investment vehicles sold by banks to the public, offering rates above the state-mandated 3 percent savings rate. The products have allowed banks to encourage parking money with banks even with inflation rising.

With a tacit nod from Beijing, the banks can act as intermediaries for shadow bankers and their clients without taking debt onto their balance sheets.  [hmmm...just like the western bank systems! -AK]

With the crackdown, China's regulators have taken aim at the sale of wealth products as well.

The interbank lending spike in June that was engineered by China's central bank hit banks that were overly reliant on short term borrowing, a reliance that analysts say came, in part, from funding wealth product payouts promised at the end of each month.

Curb side lending is a legal but unregulated type of high interest loan, the main advantage being the speed in which the money is handed over. Executives giving loans on behalf of their companies, peer-to-peer lending networks and family members with money to spare are considered part of this lending industry. Monthly interest rates can exceed 40 percent, or annualized rates of nearly 500 percent.

China's pawn shops, which are licensed and regulated, are a key layer of shadow banking, offering an array of non-bank loans to individuals and companies. Bank of America said in a research note last year that the size of China's pawn shop industry at the end of 2011 was 118 billion yuan.

The current size is around 500 billion yuan, according to Joe Zhang, the Chairman of Wansui Micro Credit in Guangzhou. Interest rates can go up to 35 percent on pawn loans, Zhang says, with durations usually around three to six months.

One major advantage in borrowing from such an entity is speed and efficiency. The loans can go out in days, sometimes delivered in person, unlike the months it takes for a bank.

Standing near a line of oil paintings, a statue of Marilyn Monroe, and rows of luxury watches, he approached one of the counters and made his case. Wen was able to borrow 10,000 yuan against the necklace, for a short-term loan at a rate of 4 percent per month.

"I just want the money for emergency purposes," he said, adding that he preferred that type of loan rather than borrowing from family.

Beijing's crackdown on risky lending in a slowing economy puts the government in a tricky situation. By targeting the more risky type of loans, its efforts may tighten a lending system critical to providing credit to non-state backed entities.

"Shadow banking is actually playing a positive role in China's economy, because the current financial system is not very reasonable or sound," said Yan Hong, a finance professor at Shanghai Jiatong University.

But Hong also acknowledged that the degree to which shadow banking eases funding shortages for small to medium enterprises was becoming disproportional.

(Additional reporting by Pete Sweeney in Shanghai and Lawrence White in Hong Kong; Editing by Raju Gopalakrishnan)
Posted by Obi-Wan Kabuki at 10:47 AM
TtThanks to:http://americankabuki.blogspot.com