OUT OF MIND » PERCEPTUAL AWARENESS » THE SHIFT IN CONSCIOUSNESS » Non-Compliance: a Spiritual Revolution 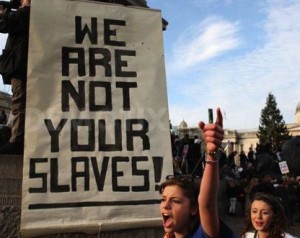 2nd July 2013
By Chris Bourne
Contributing Writer for Wake Up World
[b style="margin: 0px; padding: 0px;"]People of the world rise up![/b]
Right now, people around the world are speaking of rebellion against the unjust system that not only supports our lives, but controls them. Rioting is happening on the streets of Istanbul and in Brazil, the people are rallying against inequality and poverty. That’s not to mention the ongoing protests in Europe and other parts of the world about austerity cuts.
On YouTube and other social media, there’s much blame for our political leaders and also the bankers. But who is to blame really? And can anyone really control us? If we bring this system down, what will we replace it with?

Shouting at Reflections in the Mirror
In social media right now I’m constantly seeing new films about revolution, about bringing the unjust system in which we live down. There’s talk of taking to the streets in protest just as people around the world have begun to do. I feel for them greatly and my heart is with them: if it serves your soul to peacefully protest, if it is the highest expression of you, then you must do so.
But there’s much more to it than just protesting at what we want to change. Unless we’ve truly changed ourselves and found a more equitable way of living for all life, we’ll simply re-create the same thing on the outside that we’re still holding on the inside.
The system we live in is one of exploitation. It is endemic, right through, from governments to thebanks and corporations that effectively steal mother earth’s resources and then sell them back to us for labour. People of the world are caused to sell their labour cheaply and in so doing, transfer resource wealth from the many to a few. We’ve spoken consistently here on Openhand that such a system is not only lining the pockets of the world’s rich and powerful, it’s also dehumanising us and destroying our planet at an alarming rate.
But here’s the thing: the system is in place only because we continue to support it. So taking the streets and campaigning loudly – unless you’ve first changed within – is simply like shouting into the mirror. We are the ones who have been buying the products produced by the companies that control us. We are the ones supporting huge agro-businesses which are destroying the oceans through GMOand non-organic food production. We are the ones who support the oil and drug companies by consuming stuff we simply don’t need.
So campaign to change the government yes, but what will you do about the corporations that really control us?
All We Need is “Non-Compliance”
In our recent video Transformation of Humanity, we spoke of confronting and changing the system through “non-compliance”. You and I could begin an absolutely unstoppable revolution that wouldchange the world for the better of all life and we don’t even have to take to the streets to do it.
As Gandhi fought for Indian independence through non-violence, we can take a leaf out of his book through “non-compliance”. He made personal choices that became an example to others. So he chose to wear a home-spun clothing in order to encourage self-sufficient village industries and thus help alleviate poverty in India. If we stopped buying clothes produced in globalised sweat-shop servitude, that creates wealth for the few who then control us with it, that would immediately start tugging and unraveling the threads of the controlling matrix in which we live.
Likewise, if we chose organic and not GM food, we’d stop contributing to the destruction of our oceans and our top soil eco-systems. In the process, we’d stop lining the pockets of big business who then buy the politicians that pull the wool over people’s eyes, plus we’d find ourselves more healthy in the bargain and our consciousness would expand through the reduction of internally polluting excito-toxins. If just a small percentage of us had the courage to do this, whatever the apparent extra cost might be, the financial system would collapse very quickly bringing with it globalised destructive business and many (if not all) of the corporations that control governments and us.
Right now, we are living not in one world but two. There is the old one of the old values, injustice and inequity. But we can also access another world through the choices that we make. If we choose non-compliance with the old system in everything that we consume, then we’ll find ourselves increasingly accessing a higher vibration. The new world becomes increasingly a reality for us. We’ll feel it in our hearts, our consciousness will expand and what’s more, as more people do this, we’ll accelerate thecollapse of the old system around us.
Openhandway
So do you feel revolutionary? Do you feel it’s time for change, real change, non-compliant change that serves the higher good of all life? If so, a way will reveal itself to you. When you find the will to change and be open in your heart, immediately choices will be presented to you, today. They’ll speak through the synchronicity surrounding your feelings. Is it right to buy this or that? If you expand through your desires and contractions to the moment, a surrendered openness arises from which “Right Action” simply yearns to happen.
No one is saying you have to give up everything of the old system immediately. Since the old system practically owns all of the natural resources, we’re going to have to compromise. We may still have to use the car, but how much? We may still fly but how often? From my experience the soul is compromising, but it simply doesn’t pay to compromise the soul!
Here at Openhand we call the approach “Openhandway” or ”openway“ for short. It is a way that not only serves our own higher good, but also the higher interests of the planet too; we feel increasingly lighter, more expanded and joyful in the process.
So do you wish to change the world for the better of all? Then I advocate ‘non-compliance’ with the current system, and instead, allowing this state of surrendered openness to guide you.
Now. And always.
Chris
[color][font]
[b style="margin: 0px; padding: 0px;"]Previous articles by Chris Bourne[/b]
[/font][/color]

[color][font]
[b style="margin: 0px; padding: 0px;"]About the author[/b]
At the age of 40 Chris was involved in a life threatening car crash in which he thought he would certainly die. This precipitated total inner surrender and a rapid reconnection with the conscious life force through all things. He found himself suddenly able to experience and contemplate through multiple dimensions of reality to see the deeper purpose of life itself. He began to remember his true reason for being here.
He explains… “During the crash, time seemed to slow right down and I was guided back through key moments of my life. I was realising that every moment in our lives has but one underlying purpose – to reveal an aspect of truth about ourselves to ourselves. I was beginning to dissolve every belief and value our society had conditioned within me.”
“This was my initial awakening to the magical unifying consciousness of the soul. Over the eight years that followed, I was guided through four other inner ‘Gateways’ of consciousness. I have since come to know the process as the five key expansions on our journey of Enlightenment and ultimate Ascension into multi dimensional living – our divine birthright”.
Prior to the crash, Chris had a rich an varied professional career in industry, in teaching, as an Officer in the Army and finally as a web development entrepreneur before being initiated on his spiritual path. With a Masters Degree in Natural Sciences from Oxford University, participants in the work are finding his integration of grounded scientific understanding and profound spiritual realisation deeply engaging and transformative.
Openhand Foundation, Catalysing our Spiritual Evolution
openhandweb.org
Thanks to:http://wakeup-world.com[/font][/color]

OUT OF MIND » PERCEPTUAL AWARENESS » THE SHIFT IN CONSCIOUSNESS » Non-Compliance: a Spiritual Revolution