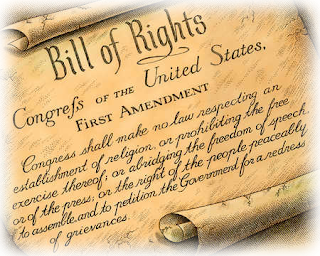 Anti-Protest Law Passes Nearly Unanimously And Is Signed By The President
Posted: 03/14/2012 10:49 am
http://www.huffingtonpost.com/lee-camp/anti-occupy-law-passes-nea_b_1343728.html

So I have some great news folks! The Republicans and the Democrats in Congress and the White House FINALLY came together and agreed on something. This is HUGE. These guys disagree on EVERYTHING! Getting them to see eye-to-eye is like getting the Jews and the Palestinians to do a trust fall together. Or getting Eskimos and polar bears to play Jenga.

What did this magical universally-loved bill say? Well some are calling it the anti-Occupy law and it allows the government to bring charges against Americans involved in many kinds of political protest at any location the secret service, quote, "is or will be temporarily visiting." So basically if the government wants to shut down a protest, they just send a secret service officer down there to scratch his balls, and then they can start putting people in jail for a year or more.

This is all lovely except for that bitchy bothersome document, the Constitution. I believe somewhere in the back it says, "Congress shall make no law . . . abridging the freedom of speech . . . or the right of the people peaceably to assemble." Aw shit! That musta sucked when Congress found that out! To get that close to passing it and then shot down? It musta been like getting hired to rub baby oil on the contestants of Miss Universe before the bathing suit portion of the competition and then losing your hands in a freak exploding cell phone accident! So when Congress heard about that first amendment they musta been like, "God damnit! That really f**ks up all our plans. That f**king line in the Constitution says not to do EXACTLY what we just did." That's what they must've said, right? ... They didn't just pass it anyway ... Right?

But the bill doesn't stop there. I mean, when you have the entirety of Congress with the exception of Ron Paul agreeing on something, why not swing for the fences? The bill also says it could be a federal crime to protest near an event of, quote, "national significance." Well, that's not vague at all. So you could be convicted of a federal crime and locked away for a year or more for the following things:

1) Marching outside the Democratic or Republican National Conventions

2) Yelling "C**k-face corporate whore" outside a barber shop where Mitt Romney is getting his ear hair trimmed.

5) Going to the gates of the White House and demanding the President read the Constitution. ...You know, if he gets a chance.

Well, Congress gets to stomp on the Bill of Rights, I want to do it too. I want to bring back cruel and unusual punishment, and then we could demand that every man or woman who voted for the Anti-Protest Law or signed it from the Oval Office be tied up in the town square naked for a week while everyone gets to throw fire ants and bumble bees at their naughty parts. Deal??
Posted by Obi-Wan Kabuki at 10:45 AM

Admin
Posts : 99266
Join date : 2012-01-04
Location : Woodstock Nation
They are smart. They know what is coming to this country. People are organizing and they know it because they read everything we post on every social media and email.

Re: Anti-Protest Law Passes Nearly Unanimously And Is Signed By The President Thu Jul 25, 2013 4:08 pm