An ancient underwater forest in the Gulf of Mexico

Scientists are exploring a submerged forest of bald cypress trees off the coast of Alabama in the Gulf of Mexico. Hurricane Katrina is thought to have uncovered it. Earlier in 2013, they announced that the forest is much older than originally thought. An early speculation was that the submerged trees were between 8,000 and 12,000 years old. The newer estimate dates the submerged trees from about 50,000 to 80,000 years ago. The submerged forest provides evidence that coastal Alabama has risen between 60 and 120 feet (18 to 36 meters) in the last 50,000 years. Scientists are now hoping to sample the ancient forest to understand what climate conditions were like along the Gulf coast during that time in Earth’s history.
A local fisherman first noticed the unusual spot in the Gulf of Mexico a few years ago. He saw that fish were abundant in the area and speculated that some sort of structure must exist on the sea floor. Fish and other marine life tend to congregate around hard structures beneath the sea, such as coral reefs and sunken ships. 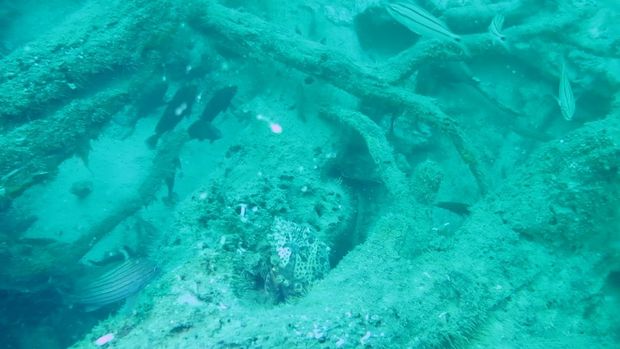 There are large stumps, roots and logs from an ancient bald cypress forest about 60 feet (18 meters) below the surface of the water, near coastal Alabama. Image via Ben Raines/AL.com 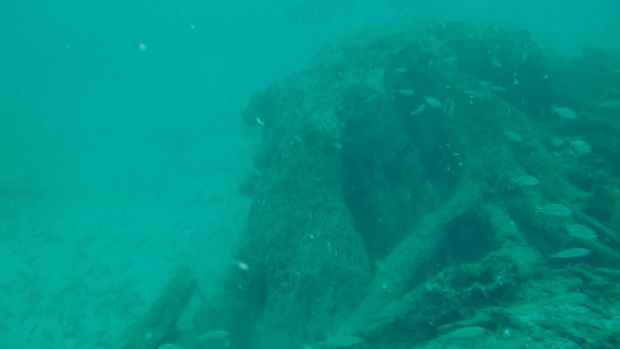 Some of logs measure 8 feet (2.4 meters) in diameter. The forest was apparently buried under thick seafloor sediments for thousands of years. It’s thought that Hurricane Katrina’s giant waves uncovered it. Image via Ben Raines/AL.com 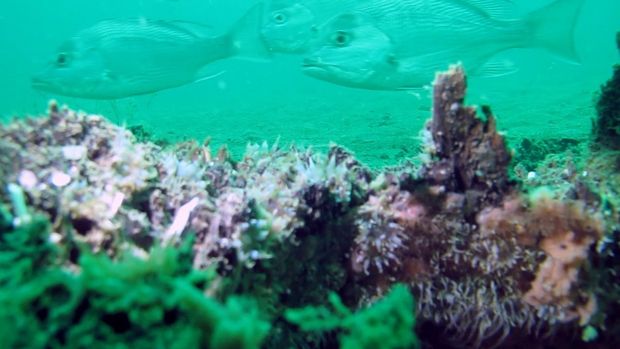 Anemones and crabs cover the ancient trees, and fish swim nearby. Image via Ben Raines/AL.com
Ben Raines, executive director of the Weeks Bay Foundation in Alabama, was one of the first scuba divers to explore the site. He discovered several large stumps and logs from an ancient bald cypress forest about 60 feet (18 meters) below the surface of the water. Some of logs measured 8 feet (2.4 meers) in diameter. He told EarthSky:

As soon as I hit the bottom, I saw the first stump. It had the trademark, irregularly shaped trunk of a cypress tree, with knees spread around it in a circle. Then I saw another, and another and knew instantly I was swimming over the remains of an ancient forest. It’s an enchanting place. You feel like you are in some sort of fairy world, with these huge stumps covered in anemones and crabs, and swarms of fish swimming all around you.

Raines recognized the importance of the find and contacted scientists to help get an estimate of the forest’s age. Preliminary evidence, derived in part from radiocarbon dating, suggests that the submerged forest may be anywhere from 50,000 to 80,000 years old. 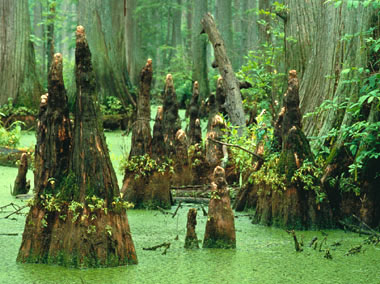 Here’s a bald cypress swamp today. The submerged forest must have looked like this at one time. Image Credit: Ted Trovillion, US Fish and Wildlife Service. 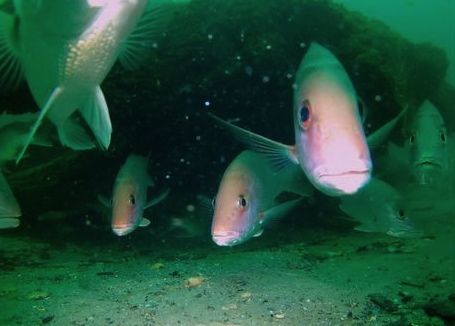 Image via Ben Raines/AL.com
North America had a very different climate 50,000 to 80,000 years ago. During that time, a large portion of North America was covered in glaciers and sea levels were much lower than they are today. Hence, the land off the coast of Alabama was not submerged underwater.
A team of scientists from the Gulf of Mexico region are hoping to study the site to understand what past climate conditions were like along the Gulf coast. Grant Harley, an assistant professor in geography at the University of Southern Mississippi, commented on their plans in a press release. He said:

What we’ll do is compare these samples with other paleoclimate records to give us an idea about climate conditions on the Gulf Coast 50-80,000 years ago, which we can tell by looking at tree growth rings. It would give us an annual record of climate during a time period in the Earth’s history when climate change was happening rapidly. If it was cold or dry, that would result in tiny, narrow growth rings, but warm or wet conditions would result in wider growth rings. To have a record of that would be unique and rare. 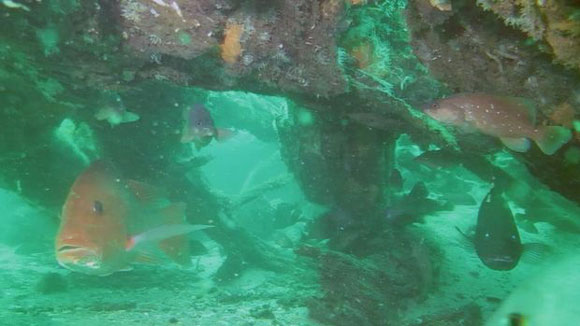 Scientists are hoping to study the site to understand what past climate conditions were like along the Gulf coast. Image via Ben Raines/AL.com.
Kristine DeLong, an assistant professor in the Department of Geography and Anthropology at Louisiana State University, also commented on the upcoming research to Weather Underground. She said:

The scientists are hoping to begin the research quickly before the underwater forest decays any further. The forest, which was previously preserved underneath seafloor sediments for thousands of years, was likely uncovered recently by strong winds and waves such as those from Hurricane Katrina. The Weeks Bay Foundation is currently working to secure protections for the site that will allow for fishing, diving, and scientific research, but will prevent salvaging of the ancient wood.
Bottom line: The remains of an ancient bald cypress forest were discovered off the coast of Alabama in the Gulf of Mexico. Scientists estimate that the trees are 50,000 to 80,000 years old. They are hoping to sample the underwater forest to understand what climate conditions were like along the Gulf coast during that time in Earth’s history.
Petrified Forest National Wilderness Area in eastern Arizona
Greening of the Earth pushed way back in time