OUT OF MIND » CONSPIRACY THEORIES & ENDURING MYSTERIES » HISTORIES MYSTERIES » Has An Ancient Giant Handprint Been Found In A Cave In Nevada?

Has An Ancient Giant Handprint Been Found In A Cave In Nevada? 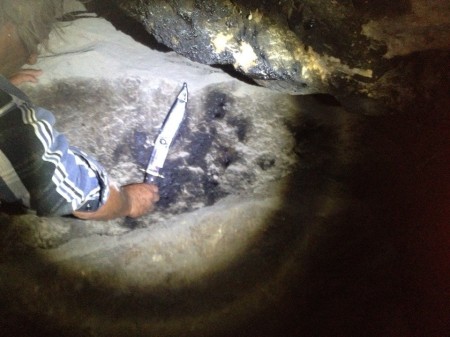 Something really weird has been found on the wall of a cave in Nevada, and it is shaking a lot of people up.  Two paranormal investigators named MK Davis and Don Monroe claim to have stumbled upon the handprint of an ancient giant in Lovelock Cave, and the pictures that have been released to the public are absolutely startling.  If this handprint is real, it is estimated that it would have belonged to someone 18 feet tall.  And what makes all of this even more compelling is that there is a very old Native American tradition that says that a tribe of red-haired giants was burned inside that cave a very long time ago.  So could we actually be looking at solid evidence that the old Native American tradition about the red-haired giants is actually real?
There has been a tremendous amount of interest in this particular cave going all the way back to 1911.  At that time, two guano miners claimed that they discovered several sets of giant bones inside the cave…
In 1911 David Pugh and James Hart, two guano miners (yes, mining bat poo is really a thing) were excavating a cave on the eastern side of Nevada when they found something intriguing buried under 250 tons of excrement.
According to the men’s bizarre tale, hidden beneath six feet of bat crap they discovered several sets of giant bones, remains which many now believe belong to the Si-Te-Cah, a storied Paiute tribe of red-haired cannibal giants. Legend has it that the last remaining giants were burned alive inside the cave thousands of years ago.
Unfortunately, nobody knows where those bones are today, and without hard evidence the excitement over that cave subsided over the years.
But now this discovery by MK Davis and Don Monroe is renewing interest in Lovelock cave.  According to Paranormal Geeks Radio, this handprint has a number of characteristics that point to it being authentic…
This knife and its sheath have been used to get a measurement. It is 18 inches. Look at Don’s hand compared to print!  If the proportions are equal to regular humans, this being would be 18 feet tall!
Besides what appears to be dermal ridges showing in the soot/fat mix that appears to be the basis of this hand print (from the cave ceiling and further legitimizing the story of a conflagration with the giants inside), the impression shows more pressure on the thenar eminence of the palm and the first three fingers, which is typical for anyone pushing or lifting something heavy (just hold your hands in front of your head as if you’re cradling a boulder – the inner aspect of your hand settles that weight).
Posted below is a video of MK Davis discussing this discovery in more detail.  What he has to say is quite compelling…

But this isn’t the only discovery of this nature that has come out in recent years.
Last year, a German news source broke the story of a 15 inch long human finger that had been photographed in Egypt.  The photographs of the finger were reportedly taken by a researcher named Gregor Spörri in 1988.  The finger appeared to have been mummified, and from top to bottom it was approximately 15 inches long.  According to the German news source, it is estimated that the creature that this finger came from would have been about 16 feet tall.
This really is a remarkable photo.  If you look closely, you can even see where the fingernail would have been… 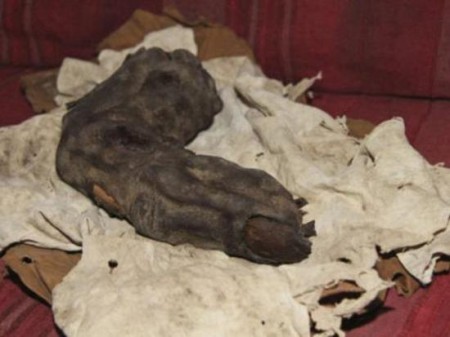 Unfortunately, nobody knows where this finger is today.  Spörri said that he had to pay “an old man from a grave robber dynasty” 300 dollars to see the finger and take photographs of it.  And since 1988 there have been no other reports of this finger.
Below is another view of the finger.  In this one, you can see part of a bone coming out of the end of it… 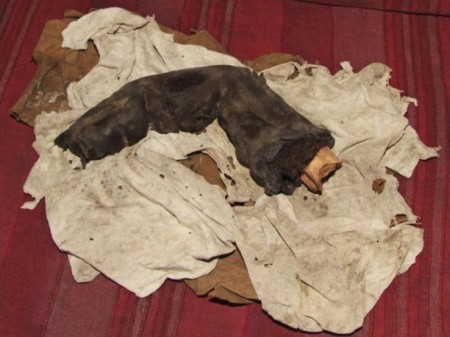 Another very strange piece of evidence that has gotten a lot of attention in recent years is “Goliath’s Footprint” in South Africa.  It is a footprint that is approximately 4 feet long, and it is located near the town of Mpaluzi, which is close to the Swaziland border.  A picture of Goliath’s Footprint can be seen below… 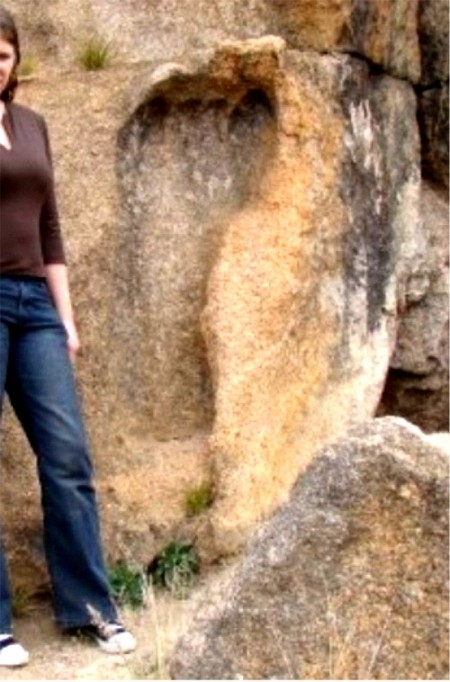 If you look carefully at the photograph, you can even see that there were five toes and that the big toe was the largest of the toes.
Posted below is a video that someone took of Goliath’s Footprint.  This video footage is quite stunning…

So what does all of this mean?
Did extremely large giants once roam the ancient world?
To many, such a notion is completely absurd, but the truth is that there are a whole host of ancient stories and legends that claim that giants once existed on this planet.
And even the Bible makes such a claim.  In Genesis 6:4, we read the following…

There were giants in the earth in those days; and also after that, when the sons of God came in unto the daughters of men, and they bare children to them, the same became mighty men which were of old, men of renown.

So what do you think?
Are we looking at evidence that giants once lived on Earth?
Please feel free to tell us what you think by posting a comment below…
Michael T. Snyder is a graduate of the McIntire School of Commerce at the University of Virginia and has a law degree and an LLM from the University of Florida Law School. He is an attorney that has worked for some of the largest and most prominent law firms in Washington D.C. and who now spends his time researching and writing and trying to wake the American people up. You can follow his work on The Economic Collapse blog, End of the American Dream and The Truth Wins. His new novel entitled “The Beginning Of The End” is now available on Amazon.com.

OUT OF MIND » CONSPIRACY THEORIES & ENDURING MYSTERIES » HISTORIES MYSTERIES » Has An Ancient Giant Handprint Been Found In A Cave In Nevada?