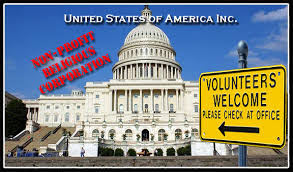 The United States -- A Private for Profit Federal Corporation -- Bankrupt & has to Pay Our Bills
August 3, 2013

I posted this article yesterday, Proof ALL of Your Debt is PRE-PAID!," and while this information isn't brand new, it has still caused quite a stir. A few comments came in claiming there wasn't enough "proof" to make these claims concrete. Fair enough, I understand it's not easy hearing the Truth when you've been lied to your whole life. For those who still need a little convincing, there are enough references in this article to do all the digging it will take to draw up your own conclusions. In complete transparency I have to admit it wasn't until recently that I began to fully understand for myself how all of this pieces together. The web of lies is deep indeed, but if we keep pulling the strings the bigger picture has an awesome way of swinging into focus. ~BK

The united states “...is a corporation, a legal fiction that existed well before the Revolutionary War.”

1933 March 9,“The new money (paper promissory notes) is issued to the banks in return for Government obligations, bills of exchange, drafts, notes, trade acceptances, and banker’s acceptances. The new money will be worth 100 cents on the dollar, because it is backed by the credit of the nation. It will represent a mortgage on all the homes and other property of all the people in the Nation.” Senate Document No. 43, 73rd Congressional Record, 1st Session.

1933 May 23, Congressman, Louis T. McFadden brought formal charges (Congressional Record May 23, 1933 page 4055-4058) against the Board of Governors of the Federal Reserve Bank system, The Comptroller of the Currency and the Secretary of United States Treasury for numerous criminal acts, including but not limited to, conspiracy, fraud, unlawful conversion and treason. The petition for Articles of Impeachment was thereafter referred to the Judiciary Committee and has yet to be acted on.

1933 June 5, to mitigate McFadden's charges (and prevent being hung for treason), Congress passed House Joint Resolution 192 to provide U. S. Citizens the right to set off all debt obligations as the consideration (something bargained for i.e., an exchange) for the transfer (theft) of all the gold and property.

1993 March 17th, United States Congressional Record, Vol. 33, page H-1303. Speaker-Rep. James Traficant, Jr. (Ohio) addressing the House: "Mr. Speaker, we are here now in chapter 11.. Members of Congress are official trustees presiding over the greatest reorganization of any Bankrupt entity in world history, the U. S. Government. It is an established fact that the United States Federal Government has been dissolved by the Emergency Banking Act, March 9, 1933, 48 Stat. 1, Public Law 89-719; declared by President Roosevelt, being bankrupt and insolvent. H.J.R. 192, 73rd Congress m session June 5, 1933 – Joint Resolution To Suspend The Gold Standard and Abrogate The Gold Clause dissolved the Sovereign Authority of the United States and the official capacities of all United States Governmental Offices, Officers, and Departments and is further evidence that the United States Federal Government exists today in name only.”

The SUBSTANCE of the American citizenry, their real property, wealth, assets and productivity that belongs to them, was pledged by the government and placed at risk as the collateral for US debt, credit, and currency for commerce to function.

Under the 14th amendment and numerous Supreme Court precedents, as well as in equity, private property cannot be taken or pledged for public use without just compensation or due process of law. The United States cannot pledge or risk the property and wealth of its PRIVATE CITIZENS for any government purpose without legally providing them remedy to recover what is due them on their risk. Courts have long ruled that to have one’s property legally held as collateral or surety for a debt, even when one still owns it and still has it, is to DEPRIVE him of it since it is at risk and could be lost for the debt at any time.
The United States Supreme Court said that, the Constitution provides that “private property shall not be taken for public use without just compensation.” United States v. Russell, 13 Wall, 623, 627.
“Sureties compelled to pay debts for their Principal have been deemed entitled to reimbursement, even without a contractual promise… And probably there are few doctrines better established…” Pearlman v. Reliance Ins. Co., 371 U.S. 132, 1962

United States Code Title 31 section 3123 states that the US Government has an obligation to pay 'dollar for dollar' principal and interest in legal tender ALL debts accrued by the American people.

Those backing the nation’s credit and currency cannot recover what is due them by anything drawn on Federal Reserve notes without expanding their risk and obligation to their own selves. Any recovery payments backed by this currency (FRNs or Federal Reserve Accounting Unit Devices; FRAUDs) would only increase the public debt its citizens are collateral for, which an equitable REMEDY was intended to reduce, and in equity would not satisfy anything, for there was no longer actual money of substance to pay anybody. In other words, there is no actual money in circulation by which debt owed from one party to another can actually be repaid. Since 1933 no one has ever really been “paid” because there's been no money of substance. Every time we spend a dollar (IOU) we increase the national debt by that same amount. Every time we send our bills to Treasury for the set off we reduce the national debt by that same amount. Federal Reserve Publication “Public Debt, Private Asset” says the national debt is owed to its creditors which is you and me.
Posted by Brian Kelly at 5:02 PM

Thanks to Brian at: http://briankellysblog.blogspot.nl/