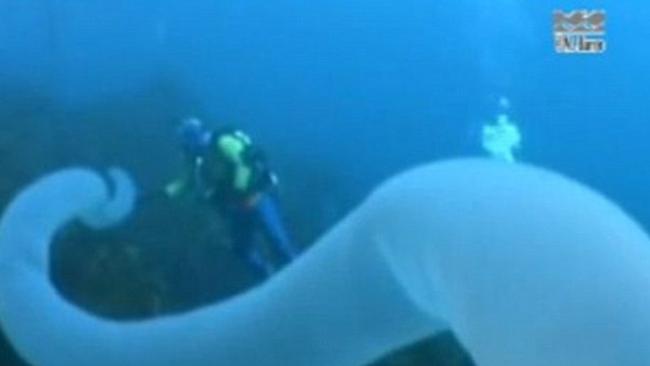 Divers from the Eaglehawk Dive Centre in Australia, including Michael Baron, have captured rare images of the Pyrostremma spinosum sea creature.

Via dailytelegraph.com.au, 6 August 2013 - AUSSIE divers have captured rare images of a creature dubbed the unicorn of the sea in the depths of the ocean.

The Pyrostremma spinosum, or pyrosome, sea creature is so rare it was dubbed the unicorn and can grow up to 30 metres long - the equivalent of two double-decker buses laid end-to-end.

Its hollow, translucent, cylindrical body is made up of thousands of tiny clones called zooids that pull water through its tubes and feed on plankton before pushing the filtered water back out.

The zooids are each connected by tissue and move as one inside the pyrosome's tube structure and each zooid is a few millimetres in size.

Also called a sea squirt, the pyrosomes are classed as pelagic, which means they are free-swimming and live in open water rather than near land. 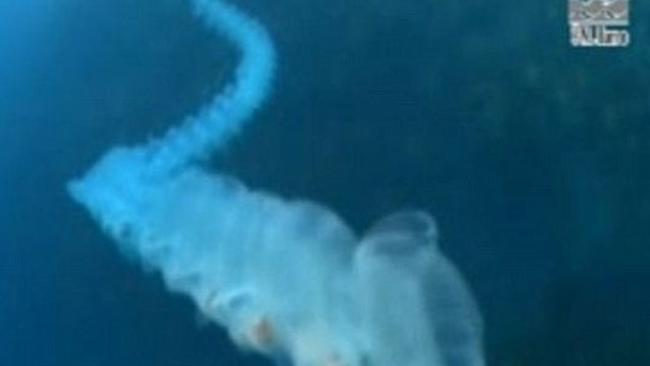 Weird....Divers capture image of the creature dubbed the ‘Unicorn of the Sea’
This means they are rarely spotted and only diving groups are likely to catch a glimpse of the giant creatures.

The long tube consists of a pointed end with a hole on the other that can be as wide as two metres. The images were first posted on YouTube by eaglehawkdive.com.au in 2011 but resurfaced recently.

Each pyrosome feasts on plankton and according to Rebecca Helm from Deep Sea News, it is a cross between the Borg in 'Star Trek' and a clone in 'Star Wars.'

Helm said: 'They're giant, terrifying looking, and trolling through the depths of the ocean, waiting for you to swim in one end and get stuck. Maybe. But fortunately, in addition to being slow moving filter feeders, they're also delicate and fluffy.'

The pyrosome is so delicate one diver is said to have even described it like a feather boa.

Michael Baron from from Eaglehawk Dive Centre recorded the footage of the giant creature off the Tasman Peninsula in Tasmania.

He said it was one of the few areas in the world where a wide range of 'oceanic gelatinous plankton' comes close to shore.

Baron also managed to film salps that are similar to pyrosomes but the individuals inside it are much larger than the zooids inside the pyrosome.

According to Eaglehawk Dive Centre's YouTube page: 'Salps have much larger individuals than pyrosomes, individuals pump water through themselves.

'Colonies are formed of chains of individuals. Salps can form very high densities under good conditions, and are an important oceanic food source for fish.