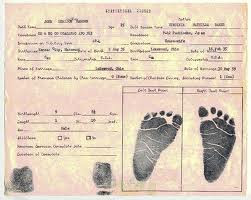 I'm posting this article because it's sourced with a lot of great references. When we collectively become aware of corruption, we collectively free ourselves from the corrupt. ~BK


Federal Children/through fraud and deception the federal corporation thinks they own you and your children.

In 1921, the federal Sheppard-Towner Maternity Act created the birth "registration" or what we now know as the "birth certificate." It was known as the "Maternity Act" and was sold to the American people as a law that would reduce maternal and infant mortality, protect the health of mothers and infants, and for "other purposes." One of those other purposes provided for the establishment of a federal bureau designed to cooperate with state agencies in the overseeing of its operations and expenditures. What it really did was create a federal birth registry which exists today, creating "federal children." This government, under the doctrine of "Parens Patriae," now legislates for American children as if they are owned by the federal government. Through the public school enrollment process and continuing license requirements for most aspects of daily life, these children grow up to be adults indoctrinated into the process of asking for "permission" from Daddy government to do all those things necessary to carry out daily activities that exist in what is called a "free country."

Before 1921 the records of births and names of children were entered into family bibles, as were the records of marriages and deaths. These records were readily accepted by both the family and the law as "official" records. Since 1921 the American people have been registering the births and names of their children with the government of the state in which they are born, even though there is no federal law requiring it. The state tells you that registering your child's birth through the birth certificate serves as proof that he/she was born in the united States , thereby making him/her a United States Citizen. For the past several years a social security number has been mandated by the federal government to be issued at birth.
In 1933, bankruptcy was declared by President Roosevelt. The governors of the then 48 States pledged the "full faith and credit" of their states, including the citizenry, as collateral for loans of credit from the Federal Reserve system. To wit:"Full faith and credit" clause of Const. U.S. article 4. sec. 1, requires that foreign judgement be given such faith and credit as it had by law or usage of state of it's origin. That foreign statutes are to have force and effect to which they are entitled in home state. And that a judgement or record shall have the same faith, credit, conclusive effect, and obligatory force in other states as it has by law or usage in the state from whence taken.Black's Law Dictionary, 4th Ed. cites omitted.

The state claims an interest in every child within it's jurisdiction. The state will, if it deems it necessary, nullify your parental rights and appoint a guardian (trustee) over your children. The subject of every birth certificate is a child. The child is a valuable asset, which if properly trained, can contribute valuable assets provided by its labor for many years. It is presumed by those who have researched this issue, that the child itself is the asset of the trust established by the birth certificate, and the social security number is the numbering or registration of the trust, allowing for the assets of the trust to be tracked. If this information is true, your child is now owned by the state. Each one of us, including our children, are considered assets of the bankrupt united states. We are now designated by this government as "HUMAN RESOURCES," with a new crop born every year."

In 1923, a suit was brought against federal officials charged with the administration of the maternity act, who were citizens of another state, to enjoin them from enforcing it, wherein the plaintiff averred that the act was unconstitutional, and that it's purpose was to induce the States to yield sovereign rights reserved by them through the federal Constitution's 10th amendment and not granted to the federal government, and that the burden of the appropriations falls unequally upon the several States, held, that, as the statute does not require the plaintiff to do or yield anything, and as no burden is imposed by it other than that of taxation, which falls, not on the State but on her inhabitants, who are within the federal as well as the state taxing power, the complaint resolves down to the naked contention that Congress has usurped reserved powers of the States by the mere enactment of the statute, though nothing has been, or is to be, done under it without their consent (Commonwealth of Massachusetts vs. Mellon, Secretary of the Treasury, et al.; Frothingham v. Mellon, Secretary of the Treasury et.al..) Mr. Alexander Lincoln, Assistant Attorney General, argued for the Commonwealth of Massachusetts . To wit:

I. The act is unconstitutional. It purports to vest in agencies of the Federal Government powers which are almost wholly undefined, in matters relating to maternity and infancy, and to authorize appropriations of federal funds for the purposes of the act.

Many examples may be given and were stated in the debates on the bill in Congress of regulations which may be imposed under the act. THE FORCED REGISTRATION OF PREGNANCY, GOVERNMENTAL PRENATAL EXAMINATION OF EXPECTANT MOTHERS, RESTRICTIONS ON THE RIGHT OF A WOMAN TO SECURE THE SERVICES OF A MIDWIFE OR PHYSICIAN OF HER OWN SELECTION, are measures to which the people of those States which accept its provisions may be subjected. There is nothing which prohibits the payment of subsidies out of federal appropriations. INSURANCE OF MOTHERS MAY BE MADE COMPULSORY. THE TEACHING OF BIRTH CONTROL AND PHYSICAL INSPECTION OF PERSONS ABOUT TO MARRY MAY BE REQUIRED.

By section 4 of the act, the Children's Bureau is given all necessary powers to cooperate with the state agencies in the administration of the act. Hence it is given the power to assist in the enforcement of the plans submitted to it, and for that purpose by its agents to go into the several States and to do those acts for which the plans submitted may provide. As to what those plans shall provide, the final arbiters are the Bureau and the Board. THE FACT THAT IT WAS CONSIDERED NECESSARY IN EXPLICIT TERMS TO PRESERVE FROM INVASION BY FEDERAL OFFICIALS THE RIGHT OF THE PARENT TO THE CUSTODY AND CARE OF HIS CHILD AND THE SANCTITY OF HIS HOME SHOWS HOW FAR REACHING ARE THE POWERS WHICH WERE INTENDED TO BE GRANTED BY THE ACT.

In more recent cases, however, the Court has shown that there are limits to the power of Congress to pass legislation purporting to be based on one of the powers expressly granted to Congress which in fact usurps the reserved powers of the States, and that laws showing on their face detailed regulation of a matter wholly within the police power of the States will be held to be unconstitutional although they purport to be passed in the exercise of some constitutional power. Hammer v. Dagenhart, 247 U.S. 251; Child Labor Tax Case, 259 U.S. 20; Hill v. Wallace, 259 U.S. 44.

(2) The act is invalid because it imposes on each State an illegal option either to yield a part of its powers reserved by the Tenth Amendment or to give up its share of appropriations under the act. A statute attempting, by imposing conditions upon a general privilege, to exact a waiver of a constitutional right, is null and void. Harrison v. St. Louis & San Francisco R.R. Co., 232 U.S. 318; Terral v. Burke Construction Co., 257 U.S. 529.

(3) The act is invalid because it sets up a system of government by cooperation between the Federal Government and certain of the States, not provided by the Constitution. Congress cannot make laws for the States, and it cannot delegate to the States the power to make laws for the United States . In re Rahrer, 140 U.S. 545; Knickerbocker Ice Co. v. Stewart, 253 U.S. 149; Opinion of the Justices, 239 Mass. 606.

The Maternity Act was eventually repealed, but parts of it have been found in other legislative acts. What this act attempted to do was set up government by appointment, run by bureaucrats with re-delegated authority to tax, which is in itself unconstitutional. What was once declared as unconstitutional by the Supreme Court of this nation in the past should be upheld in a court challenge today. The constitution hasn't changed. What has changed is the way this government views human life. Today we are defined as human resources, believed to be owned by government. The government now wants us, as individuals, to be tagged and tracked. Government mandated or legislated National I.D. is unconstitutional anyway you look at it. Federal jurisdiction to legislate for the several states does not exist and could never survive a court challenge as shown above. Writing letters to elected public servants won't save us when we all know their agenda does not include serving those who placed them in power. Perhaps the 10th amendment of the federal constitution guaranteeing states rights will, if challenged, when making it known that we as individuals of the several states will not be treated as chattel of the U.S. government. If the federal government believes they own us, and as such have the right to demand national I.D. cards, and health I.D. cards, which will in truth tag us as we tag our animals, then let them bring forth the documents to prove their authority to legislate for it. If our G-D given rights to liberty and freedom, which were the foundation upon which this nation was created do not exist, and liberty and freedom is only an illusion under which the American people suffer, then let the governments of this nation come forward and tell the people. But...if we are indeed free, then we should not have to plead or beg before our elected public servants to be treated as such. If, in truth we are not free, then perhaps it's time to let the final chapter of the Great American Revolution be written..........
Posted by Brian Kelly at 12:00 PM

Guest
The IRS, SSN, & ALL CAPS NAME, have been used as a major part of this slavery system, plus licenses for everything from marriage to driving to earning a living or doing business, and permits for building, etc.

Time for people to wake up & SEE what's goin' on!! AND perhaps to say "NO MORE!!" in whatever manners each feels called....

BEcome the change we wish to see