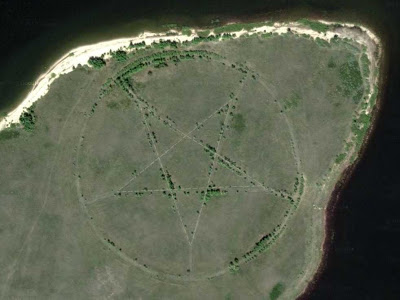 On a desolate, wind-swept corner of Kazakhstan, a large pentagram is engraved into the earth’s surface. The eerie circle with a five-pointed star in the middle shows up clearly on Google Maps.

The circle’s circumference is more than 1000 feet wide and the central star is a clearly defined, mathematically correct pentagram. It is located on the southern banks of the Upper Tobol Reservoir, an area that is void of human habitation. The closest civilization is Lisakovsk city, which is approximately 20 kilometers to the east.

The area surrounding the bizarre shape is dotted with ancient ruins. Prehistoric cemeteries, settlements and places of burial bound the barren land.

Unbelievably this mysterious corner of the world, riddled with ancient artifacts, has yet to be fully explored.

Augmenting the intrigue of the strange symbol is that when Google Map viewers zoom up on the center of the pentagram, two places have been highlighted by previous Google Maps visitors. One of the spots is named Adam and the other has been named Lucifer. Lucifer is the Latin word for “morning star” and in Christian tradition is the proper name for satan.

However, according to the Vigilant Citizen, since the story of the pentagram came out on the Internet, these “Adam” and “Lucifer” locations have disappeared and zooming into the pentagram has now been disabled.

The same report also states that since the story broke, Russian text now appears when you look at the pentagram on Google Maps. The text translates as:

Since the Kazakh pentagram was spotted on Google Maps, it has naturally caused speculation and debate. Many netizins have linked the object as being a place of devil worship and evil religious sects.

Additional images of the site can be seen on Englishrussia.com. The photos of the site depict a desolate area of dry grass and bare trees close to a lake. The author describes how someone ventured to the site to find out what the object was and says that it is a park with neatly planted trees to make the symbol look like a pentagram. The author also states that there is a visible print of a stella erected in the middle of the park. Offering no real explanation to what the pentagram actually is, the Englishrussia author writes:

“It could be an idea of some eccentric designer or a job of an alien civilization. And of course, it might be shaped like that naturally.” (3)

Media such as the Daily Mail and Yahoo News are quick to associate the mysterious giant pentagram in Kazakhstan with conspiracy theories, claiming that it might be a military site or a park. (4)

Other less mainstream news outlets point toward the occult properties of the symbol and the fact that the pentagram is an ancient symbol used by many religions and cultures. The symbol has been adopted by Christians, Freemasons, Pythagoreans and Mesopotamians.

Talking about the symbolism of the upright and inverted pentagram, Manly P. Hall, a 33rd Degree Freemason and expert in occult symbolism wrote in his paper, “The Secret Teachings of All Ages”:

“In symbolism, an inverted figure always signifies a perverted power. The average person does not even suspect the occult properties of emblematic pentacles.” (1)

What Is the Bizarre Object? 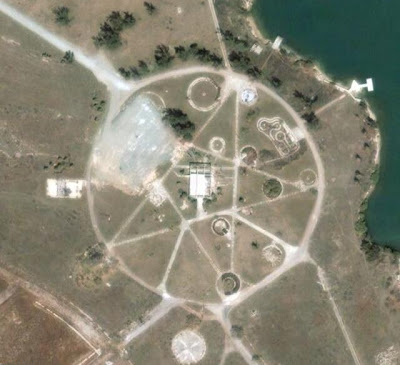 Amid the speculation and commentary over what exactly the bizarre object is, Emma Usmanove, an archeologist who has explored the Lisakovsk region for many years, believes that she has the answer.

“It is the outline of a park made in the form of a star,” the archeologist told LiveScience. (2)

Usmanova explained that during the Soviet era the star was an important symbol. Until the symbol was finally disbanded when the Soviet Union was dissolved in 1991, stars were frequently adorned on buildings, flags and monuments throughout the Soviet Union.
Usmanova continues that the pentagram is marked by roadways which are lined with trees. This tree-laden outline is what makes the star shape even more distinct on Google Maps, explains the archeologist.

Google Maps certainly seems to be an important modern tool for making mysterious discoveries. In New Mexico, two large diamonds surrounded by two overlapping circles have been located. According to an author of Scientology, the site is a hidden bunker that belongs to the Church of Scientology. (2)

Such strange objects naturally whet the appetite of conspiracy theorists and instigate a flood of speculation and commentary across the Internet. Being familiar with the area and being a well-established archeologist, Emma Usmanove’s explanation that the Kazakhstan Pentagram is a symbol that was recurrently embedded on buildings, monuments and other places during the Soviet Union era, perhaps sounds the most logical and likely explanation.

What do you think the bizarre pentagram on this windswept corner of Kazakhstan is? A symbol of satan? An abandoned air missile site? A dissolved symbol of the Soviet Union? Or something else entirely? We’d love to know your views.