Invisibility cloak made from simple mirrors can stop time indefinitely

Invisibility cloak made from simple mirrors can stop time indefinitely Tue Aug 20, 2013 7:24 am

Invisibility cloak made from simple mirrors can stop time indefinitely 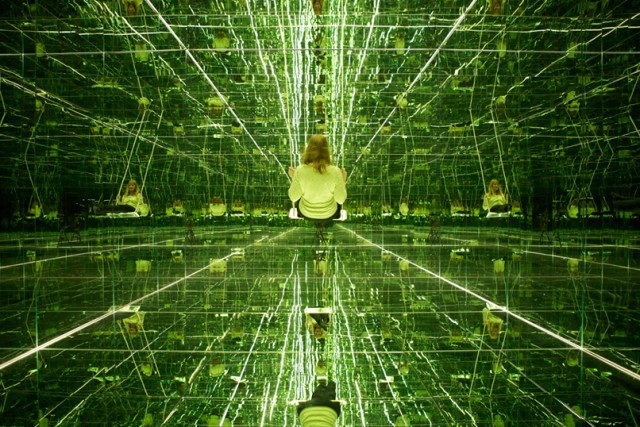 Researchers at Northwestern University have designed an invisibility cloak that can temporally hide objects for an indefinite period of time. Objects covered by this invisibility cloak wouldn’t disappear from sight, but rather it would appear that time has completely stopped for the cloaked object. A clock, for example, would continue to tick — but to the human observer, the hands would never move. One use for such a cloaking device is security, where a thief might set up a temporal cloak in front of an object that he intends to steal — so that to any outside observers or security cameras, the theft — the event, in physics terminology — hasn’t yet occurred. There are, of course, lots of military uses as well.
The best bit, though, is that the Northwestern invisibility cloak is fashioned out of plain old mirrors, which means that the device should cloak the entire visible light spectrum. Most of the recent research into invisibility cloaks (both spatial and temporal) has focused on the use of metamaterials — man-made materials that can bend light in weird and wonderful ways. So far, though, we have only been able to engineer metamaterials that operate in narrow electromagnetic bands, such as infrared light or microwaves — which isn’t very useful if you’re trying to hide something from humans.

The temporal cloak, designed by mathematician Miguel Lerma, uses four normal mirrors (B, C, F, G) and four electrically switchable mirrors (A, D, E, H) that can be switched between fully reflective, fully transparent, or anywhere in between. Basically, for us to perceive an event — such as a clock hand moving — light has to bounce off the clock and strike the back of our eye. This happens at the speed of light, which over a short distance is essentially instantaneous.  If you slow down the light before it reaches the object, however, it creates a period where the object isn’t illuminated — and therefore you cannot see the event. (Read: Researchers create temporal cloak that can erase digital data from ....)
The process is somewhat complex, but by changing the reflectivity of the four electrically switched mirrors, events that occur at the object (O) can be hidden from the observer. The duration of the temporal cloak is twice the time it takes light to travel between A and B — and so if you place B a very, very long way away — such as on another planet — you could theoretically cloak an object for minutes, or hours… or light years. I guess you could even do it here on Earth, if you created a massive (and I mean millions of miles massive) network of mirrors capable of bouncing light around for a few seconds or minutes.
For now, it sounds like Lerma hasn’t yet built the device — but there’s no reason his design couldn’t be implemented today, using existing and readily available materials. In fact, given the time machine nature of this device, it’s possible that someone — perhaps the military — has already built it. We just can’t see it yet…
source : http://www.extremetech.com/extreme/163912-invisibility-cloak-made-f...

» Pentagon Releases UFO Files From Secret Projects: Invisibility Cloak & Wormholes
» Stephen Hawking's big ideas made simple
» 7 Secrets of Simple Living You have been made to Forget
» John Ward – Banking Armageddon : The Roadmap Made Simple
» Son Tells Mom to “Stop the Car!” – She Was Shocked …Then What She Saw Made Her Cry