OUT OF MIND » PERCEPTUAL AWARENESS » OTHER DIMENSIONAL » This eerie figure appeared in the corner of the picture - but who or what is it?

This eerie figure appeared in the corner of the picture - but who or what is it?

This eerie figure appeared in the corner of the picture - but who or what is it?

Via todmordennews.com, 18 August 2013 - This eerie picture was taken earlier in the summer and the photographer, who has blown up the relevant section and placed it in the middle of the photograph, wonders if anyone can shed any light on it.

Taken from near the Baltimore Marina, where photographer William Kay had moored his boat, it appears to show, in the bottom right of the image, the ghostly presence of a woman wearing an old-style dress. 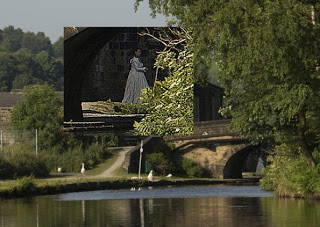 William explained that he was only taking some test shots with a new camera and only noticed the figure when checking the pictures on his personal computer later.

He took the photograph on July 6, at the peak of this summer’s hot weather.

“Her dress looks to be old and certainly out of place for a hot day and wouldn’t be worn on a muddy canal side. The photo was taken with a Nikon D600 bought on the same day and was only the fifth shot taken with it. The photo was a test shot and I didnt see the apparition at the time I took the shot, only afterwards when I downloaded the photos to my PC,” he said.

“I was doing the zoom check and trying to see the number of the bridge and it just came up then. I couldn’t believe it and was quite shocked. I’m not a believer in the supernatural and a bit cynical about such things. I haven’t seen anything since.”

OUT OF MIND » PERCEPTUAL AWARENESS » OTHER DIMENSIONAL » This eerie figure appeared in the corner of the picture - but who or what is it?