After weeks of speculation, South African court documents revealed that Nelson Mandela is, by all intents and purposes, dead. What followed his death is a tale of dishonesty and denial – staining the South African Government and its public institutions.
The documents, part of a legal filing in a Mandela family dispute, reveal that doctors told the family of the former President that “He is in a permanent vegetative state and is assisted in breathing by a life support machine…The Mandela family has been advised by the medical practitioners that his life support machine should be switched off.”
The court documents containing this revelation are dated June 26th; one day before The Guardian Express reported that Madiba – the tribal name by 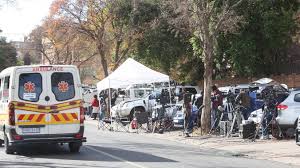 which Mandela is often known – had passed away.
Mandela’s health had been declining for some time and on June 8th, he was rushed to the Medi-clinic Heart Hospital in Pretoria to be treated for a recurring lung infection. As the days passed, South Africans gathered in vigil outside the hospital and the South African government urged people to pray for the former President, who is considered a hero in South Africa for leading the nation out of Apartheid and becoming the county’s first black national leader.
Updates on Mandela’s health have fluctuated between ominous and optimistic in the days and weeks that followed. The whole nation was mired in dishonesty and denial over Mandela’s death. On June 23rd, South African government officials announced that his condition had deteriorated and CNN reported that he was now no longer able to breathe unassisted and had been placed on life support. On June 25th, the day that – according to The Guardian Express – Mandela died, his closest family members had gathered for a meeting in his childhood home of Qunu, in South Africa’s Eastern Cape Province. That evening, the family was joined at Mandela’s bedside by Cape Town Archbishop Thabo Makgoba. Nelson Mandela was Christian, although there seems some dispute as to which branch of the faith he belonged. A family gathering at his bedside, with an Archbishop in attendance, on the very evening that – according to The Guardian Express– he passed away, seems more than coincidental.
Days later, South African President Jacob Zuma – along with other government and ANC officials – were describing Mandela’s condition as improving.  Zuma repeatedly told the People of South Africa that the nation’s beloved icon was “critical but stable”. 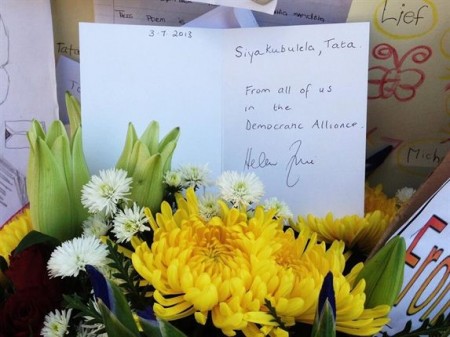 We now know that Zuma and the ANC were lying. The Guardian Express timeline of events can be found here. Even if Mandela had been still alive, there is no possibility that his condition was improving.  According to the McGraw-Hill Concise Dictionary of Modern Medicine, a “permanent vegetative state” – more commonly called “persistent vegetative state” (PVS) – is a condition characterized by “no behavioral evidence of awareness of self or surroundings in a learned manner, other than reflex activity of muscles and nerves for low level conditioned response,” and “from which to a reasonable degree of medical probability, there can be no recovery.”
Cheryl Arenella MD, MPH, in an article entitled Coma and Persistent Vegetative State: An Exploration of Terms, writes “A person in a vegetative state can no longer “think,” reason, relate meaningfully with his/her environment, recognize the presence of loved ones, or “feel” emotions or discomfort. The higher levels of the brain are no longer functional.”
Later reports from South Africa revealed ongoing construction of new roads in Qunu; presumably, to accommodate mourners. In addition – even whilst official accounts insisted that the former President and leader of the African National Congress (ANC) was still clinging to life – reports emerged of a legal tussle between Mandela family members, regarding the site of his eventual resting place. Most assumed that Mandela would be buried in Qunu, where he grew up and had his retirement home.  Grandson Mandla Mandela, however, had planned to ensure that his grandfather was laid to rest in the nearby village of Mvezo, where he, Mandla, holds the position of chief. Mandla had already had the bodies of three of Mandela’s children exhumed from their graves in Qunu and reburied in Mvezo. Other family members are currently attempting to have the courts compel Mandla to return the bodies to Qunu. It is this legal battle that led to the revelation over Mandela’s condition. What’s more, one might ask, why would Mandla execute such an action if he believed his grandfather would recover? Did Mandela’s grandson know he would never have to answer to Madiba? How did he know?
Media organizations – both in South Africa and overseas – have been criticized for speculating over Mandela’s condition, particularly since he was 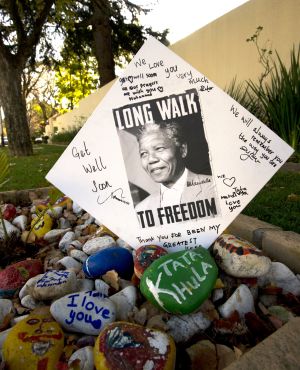 readmitted to the hospital. The government, the ANC organization and members of Mandela’s family have been urging people to remain calm and have also expressed their displeasure with the press. Although there have been numerous erroneous reports of Mandela’s passing from as early as late 2012, The Guardian Express was the first media organization in the United States – possibly, the world – to report his death as having happened Tuesday evening; this, after our South African correspondent, Laura Oneale, was notified by a very well-placed source. Even after publishing the news Wednesday, The Guardian Express, whilst having complete confidence in this source, continued its attempts to uncover further details and determine why news of Mandela’s death, or at least his presumption of death, was being concealed. Without absolute confirmation of the reasons behind the cover-up, The Guardian Express initially decided to publish no further articles on the subject. Likely factors, however, were security fears, particularly in light of President Obama’s important, impending arrival.
The decision regarding whether or not to publish the story was not easy; one of the site’s senior editors argued against it. The site initially published three stories, commenting on his death – links to these stories are listed at the foot of this article. The original source – because of their position – was determined to have sufficient credibility, although The Guardian Express senior staff continued searching for further information, including several phone calls to Mandela’s hospital. At no point, during any of these calls, were journalists or editors from The Guardian Express told that Mandela was alive; on one such call, the question “is Mandela Alive?” was asked and was met by a lengthy pause, followed by the statement that staff members did not have any information and had been told to give out no information.
In the interests of journalistic integrity, the site was not prepared to retract the story unless conclusive evidence was obtained that showed Mandela still to be alive; no such evidence was discovered, neither at that time, nor at any time since. Other media outlets that published word of Madiba’s passing quickly retracted their stories.
Since the publication of the first articles relating to Mandela’s death, every assertion that he was still alive has originated from Jacob Zuma, ANC officials and/or the Mandela family, who, sadly, appear to have been coerced or duped into perpetuating the deception. Every media outlet that continues to report on the state of Mandela’s health is basing its reporting on official sources and interviews with family members. No-one, other than the medical staff at the Medi-clinic Heart Hospital, the family or the government has seen Mandela since the day The Guardian Express reported his death. Not even President Obama was allowed to see him. There is, therefore, not one shred of evidence that he remains alive. The Guardian Express, however, has a very well-placed source confirming that Mandela is no longer with us. In that light, breaking the story was a bold, but logical, decision. According to a report Thursday in South Africa’s Independent Online, the Mandela family has refused to allow his life-support apparatus to be switched off until the remains of his children are relocated to Qunu. If this is, in fact, the only reason that Mandela is still, to this day, on life support, then the family has already accepted that he is dead; they are merely delaying  making the fact ‘technically’ final, in order that the respected elder statesman not be buried alone.
Although Mandela’s death is all but officially admitted – and likely will not be- (as this would confirm that the South African government has been deceiving the nation) The Guardian Express has always maintained that he did, in fact, leave us Tuesday evening, as reported. This belief is confirmed by several factors, one being that between Tuesday evening and the present time, no evidence has been produced that Mandela was still alive. Additionally, The Guardian Express website has, over the past few days, been subjected to several cyber attacks, which have taken the site offline for varying periods of time. These attacks appear to have originated in South Africa. Were it true that Mandela had still been alive after The Guardian Express reported his death, the publication would almost certainly have received official – and, quite possibly, even legal – demands for a retraction and apology. Instead, the website has been the target of crude attempts to silence it. Has the ANC graduated from actual terrorism to cyber terrorism?
As anticipation of President Obama’s visit mounted, the White House was quick to play down the prospects of a visit to Mandela’s bedside. In hindsight, it is clear that this was an attempt to preempt the embarrassing and precarious situation of Obama being forced to pretend to have met with a dead man.
The government of South Africa, assuming – correctly – that the man’s death will be the overwhelming focus of the world’s attention, will probably never address the issue of exactly when he died. Their assertion, regarding the timing of his death, may never been disproven. By the same token, The Guardian Express reports of his death Tuesday will stand, without verifiable contradiction. There will be those who maintain we were premature and not accurate, but the impeccable credentials of our South African source completely neutralize those claims.
Not wanting to lose their icon, the majority of South Africans have been in denial over Mandela’s death, resulting in their eager acceptance of their government’s dishonesty.
The Guardian Express does not cheer Mandela’s passing, but – now that these court documents reveal the true date of his death – its reporting on the matter stands alone.
As for Madiba, history will be good to him. Although he was no saint, he was – undeniably – a hero and an inspiration to many.
Graham J Noble
Nelson Mandela, Death, Dishonesty and Denial
Thanks to: http://crystalseed.ning.com