The mysterious Aboriginal rock art of the Wandjinas – Extraterrestrial or not

The mysterious Aboriginal rock art of the Wandjinas – Extraterrestrial or not Thu Aug 29, 2013 10:36 pm

The mysterious Aboriginal rock art of the Wandjinas – Extraterrestrial or not

Via ancient-origins.net, 29 July 2013 (Thanks Connie) - One of the most intriguing and perplexing legends of the Australian Aboriginal people is that of the Wandjinas, the supreme spirit beings and creators of the land and people.  The land of the Wandjina is a vast area of about 200,000 square kilometres of lands, waters, sea and islands in the Kimberley region of north-western Australia with continuous culture dating back at least 60,000 years but probably much older. 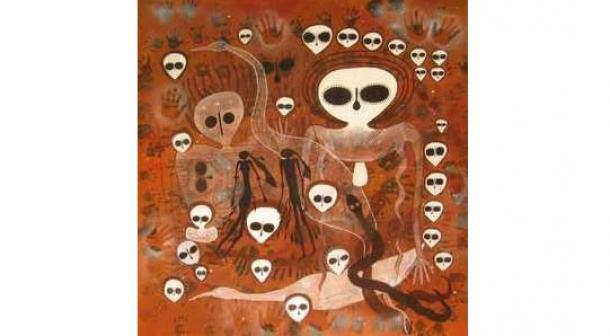 Here, traditional Aboriginal law and culture are still active and alive. The Worora, Ngarinyin and Wunumbul people are the three Wandjina tribes – these tribal groups are the custodians of the oldest known figurative art which is scattered throughout the Kimberley. Perhaps what is most interesting about their figurative art painted on rocks and in caves is the way in which they have represented the Wandjinas - white faces, devoid of a mouth, large black eyes, and a head surrounded by a halo or some type of helmet.

The ancient paintings have received all manner of interpretations from stylized representations of people or even owls, to ancient astronaut theories which suggest that extraterrestrial beings visited Earth tens of thousands of years ago and had direct contact with the inhabitants. Some believe that the extraterrestrials even played a direct role in creation, which is reflected not only in the Dreamtime stories of the Aboriginals but also the myths and legends of many ancient civilizations around the world. 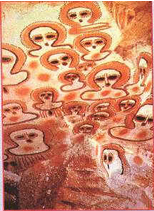 One could be forgiven for thinking that there is indeed a remarkable similarity between the Wandjinas and the stereotypical image of an extraterrestrial which we see time and again in art, movies and witness accounts. And many raise logical questions such as, why were the Wandjinas painted with white skin if it was representing another Aboriginal, all of whom had black skin? Why were the eyes always painted so disproportionate to the face and nose?

And why were they all painted without a mouth? But what is even more surprising is the oral account of the Wandjinas which has been passed from generation to generation as all of the Aboriginal Dreamtime stories have. The story goes like this – the Wandjina were “sky-beings” or “spirits from the clouds” who came down from the Milky Way during Dreamtime and created the Earth and all its inhabitants. Then Wandjina looked upon the inhabitants and realised the enormity of the task and returned home to bring more Wandjinas.

With the aid of the Dreamtime snake, the Wandjina descended and spent their Dreamtime creating, teaching and being Gods to the Aboriginals whom they created.  After some time, the Wandjinas disappeared. They descended into the earth and since then, have lived at the bottom of the water source associated with each of the paintings. There, they continually produce new ‘child-seeds’, which are regarded as the source of all human life.

Some Wandjina also returned to the sky, and can now be seen at night as lights moving high above the earth. Aboriginal people, in the Kimberley also believe that even after they disappeared, the Wandjina continued to control everything that happened on the land and in the sky and sea. Aboriginal Dreamtime stories, rock art and cave paintings have often been considered more myth then reality, like the stories we find in the teachings of modern day religions. 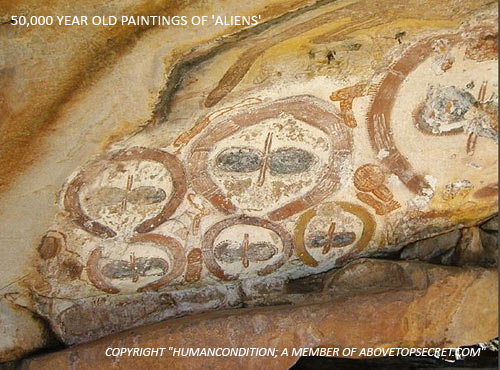 However, recent archaeological discoveries have confirmed the reality of at least some of the Dreamtime stories. For example, those that spoke of huge mammals walking the Earth were once considered fantasy. But discoveries of animal fossils belonging to ‘mega fauna’ including giant mammals confirmed that these stories were accounts of real life events, passed down by generations over tens of thousands of years.

Interestingly and of course controversially, objects have been found on geographical sites which suggest the area had been inhabited as long ago as 174,000 B.C.  This contradicts the theory that Aboriginals had their routes in Africa and that inhabitants travelled from Africa to Australia about 60,000 years ago. Other researchers have suggested that Homo sapiens actually originated in Australia.

Today, the Aboriginal tribes of the Worora, Ngarinyin and Wunumbul still revere the Wandjina and only certain individuals are given permission to paint them. It is said that the Wandjina could punish those who broke the law with floods, lightening and cyclones and the paintings of the Wandjina are believed to possess these powers, therefore according to the Aboriginals they are always to be approached and treated respectfully.

Why would ancient Aboriginal people create so-called myths or fanciful stories if it meant so much to them and remains so important to their culture to this day?  So many myths and legends of the past have already been proven true by archaeological findings, such as the legend of the city of Troy, the labyrinth of the Minotaur, Norse legends of navigational crystals and many more.

Could it not be that the Aboriginal people of the time were simply telling of events as they saw them and how they understood them at the time? Perhaps one day we will uncover the answers to these intriguing questions.

» The Mystical Discoveries of the Aboriginal Rock Art of Australia
» The Ancient City Of Hattusa; Home To The Mysterious Green Rock
» The Mysterious Waffle Rock, 300 million Years Old?
» Dwarfie Stane | Mysterious & Unique Rock-Cut Tomb on Hoy Island, Orkney, c.3000 BC | Megalithomania
» Unclear Purpose Of Mysterious Rock-Cut City Of Petra - Was It A Fortress Or Sacred City?