Taunt Reptilians At Your Own Risk

Taunt Reptilians At Your Own Risk 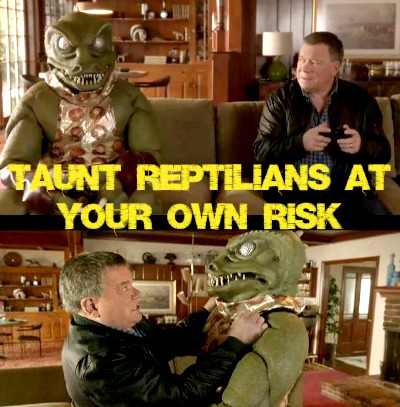 The following narrative is a submission by Matt R.:

On 8/24/13, I appeared on the Daniel Ott Radio Show. I discussed the history of my reptilian abductions, along with the experiences of the others involved in my mass abduction in 2005. I also spoke about several other cases, and their parallels to my own encounters.

In the last 10 mins of the show, the host cracked a joke about killing reptilians. What can only be described as an inhuman growl jumped into our conversation immediately after. Apparently, whatever reptilian was on the line wanted to voice their displeasure with his joke. During this conversation, I was sitting inside a parked car with the engine off. I was talking on my Skype app, over my phone's 4G connection. There was no other radio or computer anywhere near me. I can't think of anything that could have produced a growling noise that vivid. That certainly didn't sound like line interference. There are no audio files or ring tones on my Samsung S3 that sound like that. There was a deep guttural quality to it, which made it similar to what I've heard from reptilians before. Mr Ott does not have a history of pranking people on his program. And, I know there is no possible explanation for generation of that noise on my end.

There is a direct link to the mp3 excerpt with the growl, which is just below an mp3 of the full show.

This growl sounds quite similar to some of the ones heard on the recordings made during the reptilian encounters at David Eckhart household https://www.youtube.com/watch?v=cjIDrMZfPPY & https://www.youtube.com/watch?v=WNPMxkM0pF4. They too have that deep, gurgling, and emotive quality to them. The last time I spoke to David, he related an interesting anecdote about reptilians and telephones. This was during a fully conscious encounter, where a couple of reptilians surrounded him while he was working on some business paperwork at a desk in his home. A reptilian examined his new smartphone and said something to the effect of “You know we can break into this one too, right?”. Apparently, they thought he had replaced phones to try and circumvent their hacking attempts. The truth was, he had just decided to upgrade to a new phone. Mr. Eckhart also once saw a female reptilian quickly disassemble, and reassemble their home phone handset. During the process, she inserted a small device in the phone. The speed and skill with which she did so suggests she was experienced with tapping. I have had numerous phone hacking incidents, as I have discussed in previous articles on this site http://naturalplane.blogspot.com/2012/02/update-abductee-exposes-reptilian.html http://www.phantomsandmonsters.com/2012/11/the-katrina-abductions-new-revelations.html.

Being something of a feudalistic warrior culture, the reptilians have an acute sensitivity to perceived insults and threats. As many reptilian abductees have discovered, they can disproportionately react when verbally antagonized. This is is particularly true if the origin of the threatening gesture or statement is a male human. The best policy for interacting with reptilians is to use the same practice you would use speaking to a known 1% biker club member, who is wearing his logo. You have virtually no margin of safety to disrespect them. Now, this does not seem to apply to reptilians acting in a scientist or doctor role. They do not tend to overreact to perceived insults. However, the majority of encountered reptilians fall into some spectrum of what would be called a "warrior culture". That outburst on the line certainly sounded emotionally driven. It occurred less than one second after Daniel Ott's joke. This exemplifies how quickly reptilians are able to mentally process, and involuntarily react to a threat. The reptilians have a fundamentally different neurological composition, which lets them react faster than a human would. I cover this in a previous article : http://www.phantomsandmonsters.com/2013/03/here-be-dragons-new-katrina-abductions.html

If you are a researcher you can contact me at circlepanama@gmail.com.

NOTE: I do not endorse or impugn any of the narrative posted by the author. It has been posted solely as the opinion of the author without any input by myself (unless I was quoted). The narrative has been published, as received, without any edits. I will state that I believe that there are other humanoid beings living among us, either alien species or entities bio-engineered from terrestrial lifeforms. Beyond my statement you are left to your own conclusions...Lon

The Secret History of the Reptilians: The Pervasive Presence of the Serpent in Human History, Religion and Alien Mythos

Children of the Matrix: How an Interdimensional Race has Controlled the World for Thousands of Years-and Still Does

A New Order Of The Ages: Volume One: A Metaphysical Blueprint Of Reality And An Exposé On Powerful Reptilian/Aryan Bloodlines

Flying Serpents and Dragons: The Story of Mankind's Reptilian Past