OUT OF MIND » TRUTH IN CONSPIRACY THEORIES? » HISTORIES MYSTERIES » Does the Cave of the Golden Boomerang Contain Profound and Important Pre-historic Rock Engravings?

Does the Cave of the Golden Boomerang Contain Profound and Important Pre-historic Rock Engravings?

Does the Cave of the Golden Boomerang Contain Profound and Important Pre-historic Rock Engravings? 26th August 2013
By Steven Strong
Contributing Writer for Wake Up World
“Rubbish” Paintings Created by Anonymous
Nearly twenty years ago self-proclaimed rock art expert of the Kimberely Region (WA), Graham Walsh, announced his discovery of two extremely ancient paintings of “ocean-going boats.” Walsh was of the opinion the paintings were between 17-50,000 yeas old, and the chances were high that the older date was applicable.
The dimensions of these sophisticated boats were “massive” with a crew size well beyond his, or any other academics, expectation. The larger boat contained no less than 29 people and the slighter smaller vessel had 23 people seated. He openly conceded the “high prow” and large numbers aboard meant this boat had one primary function: to sail the open seas.
From Walsh’s viewpoint this discovery of these two boats provided the final clue in resolving an artistic dilemma he was grappling with, which was also thought to be found exclusively in the Kimberleys: Bradshaw Art. Elegant, vibrant, refined in detail and, most importantly, representational in reproducing the human form, Walsh believed all of these features were outside the province of the crude Original palette, therefore, could not have been created by Australian Original people.

Walsh spoke to one Original Elder, whose second language (English) was used to interpret his Original tongue. And something was lost in translation; in the Elder’s response to Walsh’s question about the origins of Bradshaw Art, the Elder referred to the “rubbish” paintings. In his regional idiom, this actually meant old and no longer in use. This misunderstanding explains why none were allowed to retouch these ancient paintings; the knowledge and songs were lost, not thrown in the bin because it wasn’t theirs to begin with, as Walsh would have us believe. But with the Australian Original people already deemed deficient in artistic refinement and maritime technology, Walsh took it as an opportunity to deny what was in evidence on the cave walls in the Kimberley region is proof of an unnamed advanced group of Homo sapien sapiens coming to Australia in huge boats nearly 50,000 years ago.
Quite simply, according to Walsh, the art is beyond them, the boats are beyond them, and therefore if it wasn’t them, it had to be a different “them” that came to Australia from somewhere else. To fill this void, he invented a fictional unidentified race, lacking in a time frame or corroborating historical evidence. That theory, as offensive and mistaken as it is, still holds credence in many books.
Walsh was wrong on many levels. The most grievous insults (and our focus in this article) are the two underlying premises he held in relation to Bradshaw Art…. He believed it was beyond the talents of Original artists thousands of years ago, and that this representational style (which Walsh regarded as the crowning imported pinnacle of pre-Cook art) was restricted to the Kimberley region. He was wrong on both counts. We are familiar with a rock-art gallery located in the Central Coast of NSW which, by comparison, makes the very best Bradshaw human figures look like crude tiny stick-figures.
The Cave of the Golden Boomerang
This magnificent rock-art narrative of six figures, each larger than life-size, comprises of two women, one male, what appears to be a new-born baby, a boomerang and Tasmanian Tiger (thylacine). With the obvious exception of the boomerang, residual traces of ochre can be seen in the belts, bands, on two circles at the waist of the standing woman and random locations. In its original condition it would seem logical to assume that the entire gallery was awash with earthen tones and colours. 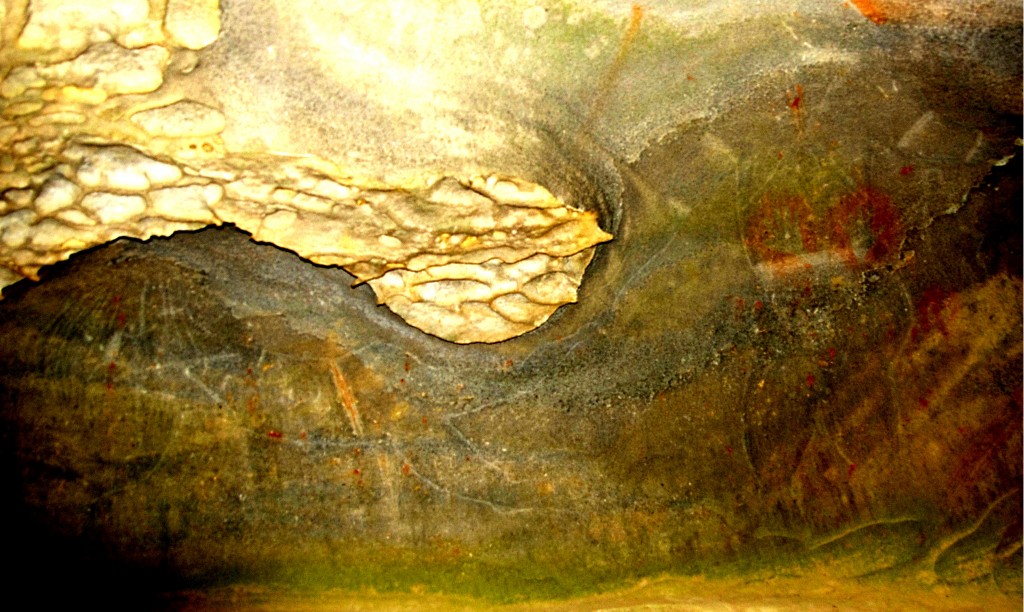 Between the male and boomerang is a sphere which is made differently to all other engravings. Instead of a delicate defined line there is a cluster of no less than ten peck marks, some are quite deep and, unlike the humans and boomerang, seem completely free of ochre. The gallery is about 20 metres in width and four metres high, and is found underneath a recessed ledge of sandstone. The engravings are worn and some parts are no longer visible. The engraved Tasmanian Tiger supplies a minimum base date of no less than 5,000 years. 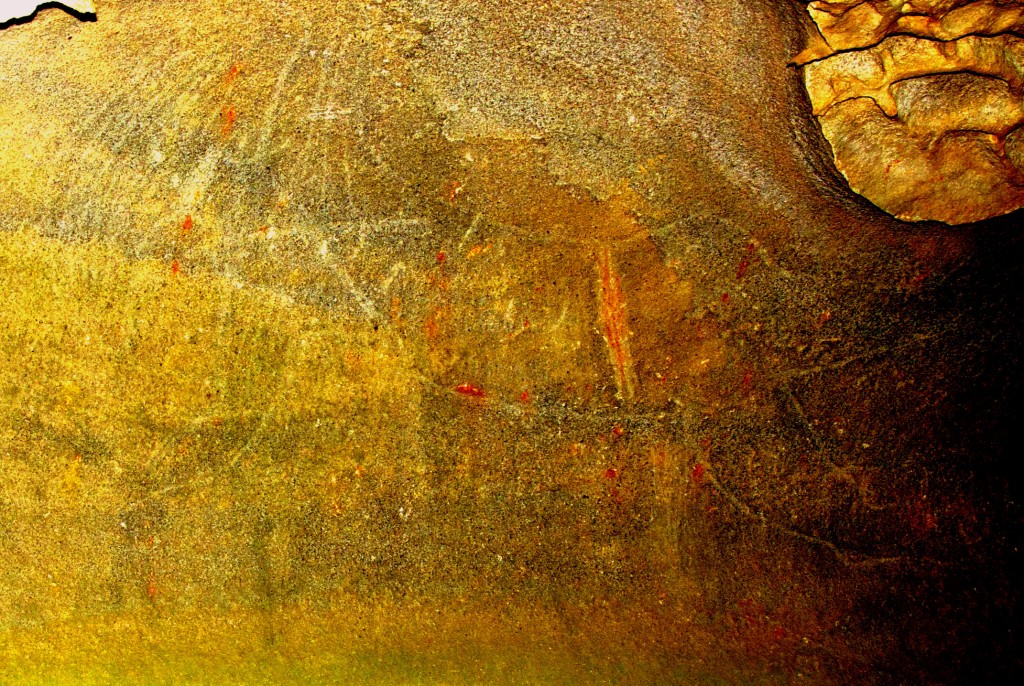 Without doubt this is the most representational, and true to life, piece of Original art yet found in this country. When examining the standing female, what became immediately obvious was the curve of hips, line and shape of body, is so obviously proportional to real life. The other two human figures also maintain the same life-like representational qualities. The defined line of the floating woman’s heel, depiction of fingers and toes and the subtle indentation in the male’s arm caused by the arm-band leave no doubt the person or persons responsible were artists of the highest order. 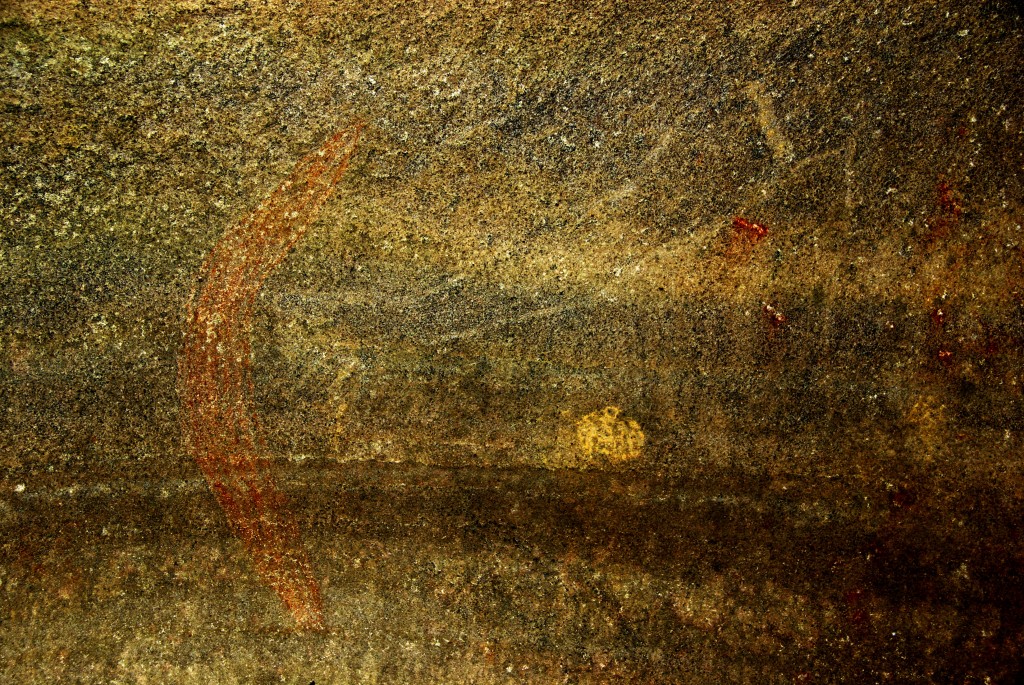 However, if relying upon Graham Walsh’s estimation of the worth of Original art, the art in this gallery must be an import. The problem is, the Kimberleys and Gosford are separated by more than 5,000 kilometres of coastline. It seems these pesky unidentified unknown mariners Walsh champions have spread all over the country, then all left without a trace.
We have a rudimentary understanding of the Dreaming story that accompanies this gallery, all we can say is that it is incredibly profound, sacred and of immense spiritual significance. My reflex response on first sighting was to compare the setting and subject matter to the ceiling of the Sistine Chapel. Upon further reflection, it turned out this open-air rock gallery is far more ancient, sublime and mystical than any old painting plastered onto the ceiling of a building.
Some Independent Research
Rather than supply our interpretations of what we saw and were told, we have chosen to present the photographs and diagrams and nearly almost leave the reader to their own devices. In marginally assisting these independent observations and deductions, while abstaining from offering opinions and information given on-site, we feel some clues and directions could be of benefit.
The diagonal crosses on both the standing and floating woman, along with the bands and belts are very important, as is what appears to be a baby. These three very human-like figures did touch each other, but as to whether the male actually made contact with the sacred boomerang, our guide declined to respond. What appears to be ‘dreadlocks’ on the head of the ‘floating woman’ is of consequence and very rare. Of fundamental importance is the gender balance, in that there are two females, one baby and only one male bearing no weapons.
Outside the thickly coated boomerang, there two faint circles and some thin patches of ochre still remaining, and this seems to indicate through the liberal application of ochre and the entire narrative leading towards the boomerang, this sacred object is of elemental importance in deciphering what the Dreaming story that accompanies this gallery means.

Walsh was wrong in assuming any form of artistic endeavour or style was beyond the capacities of the Australian Original people. The artistry on display at the Cave of the Golden Boomerang has no equal and was engraved and painted by Original people thousands of years ago.
Walsh was in error in declaring that the sophisticated representational style evident in Bradshaw art is unique to the Kimberleys; the Cave of the Golden Boomerang is even more representational, much larger and of a higher quality. Fully painted and defined, when last retouched, this would have been a magnificent spectacle.
His claims of an external involvement in the Kimberley Region are based on two assumptions, both disproved by the artistry on display at the Cave of the Boomerang, and a solitary word whose meaning was lost in translation and condescension.
So much of Original history is now finally being revealed – replacing the half-truths and omissions found in statutes and books – and this is being done for a reason. And in that vein, the answer to the title of this article is a resounding yes! All of the nobler human pursuits, as with everything else associated with Homo sapien sapiens, has its origins in Original genes and upbringing.
The Original Elders and Custodians tell us a huge change is imminent, and getting out their truths – whether past, present or future – is all part of the transformation ahead. As is this small article.
Previous articles by Steven Strong:

About the author:
Steven Strong is the newest addition to Wake Up World’s team of Contributing Writers. Steve, along with his son Evan, has co-written four books: Constructing a New World Map, Mary Magdalene’s Dreaming and Forgotten Origin (published by University Press of America) and the soon-to-be-published Shunned. He has written over a dozen articles on Original history and lore for the National Indigenous Times, with four articles appearing in New Dawn magazine. With close to 30 years of contact with Gumilaroi people and tribes of the Bundjalung Language Confederation, and the benefit of extensive consultation with many Original Elders, Steve’s work is to reveal the story of the Original people, a narrative that was almost lost.
For more information visit ForgottenOrigin.com.
Thanks to: http://wakeup-world.com

OUT OF MIND » TRUTH IN CONSPIRACY THEORIES? » HISTORIES MYSTERIES » Does the Cave of the Golden Boomerang Contain Profound and Important Pre-historic Rock Engravings?

» Mysterious artifacts with engravings of ‘Aliens’ and ‘Spaceships’ unearthed in Mexican Cave
» A Golden Eagle Lands On Standing Rock, Allows Water Protectors To Touch Him
» NESARA is most important,that the pp's are gonna rock and that the RV`s of all nations will be done after everyone is soveriegn!!!
» The Golden Light Channel – White Hat Auziliary – Fact Check Center – Fact Check #115 – A Most Important Message To All – 4-5-14
» Historic Timeline Based on Historic Sites & Artefacts Instead of Blind Belief in the Quakademia