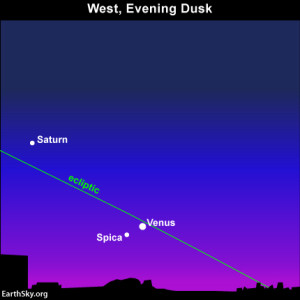 The planet Venus with the star Spica in western dusk on September 4. 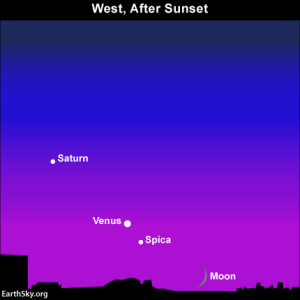 You might – or might not – catch the young moon in the glare of evening twilight on September 7. 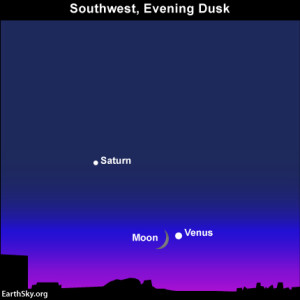 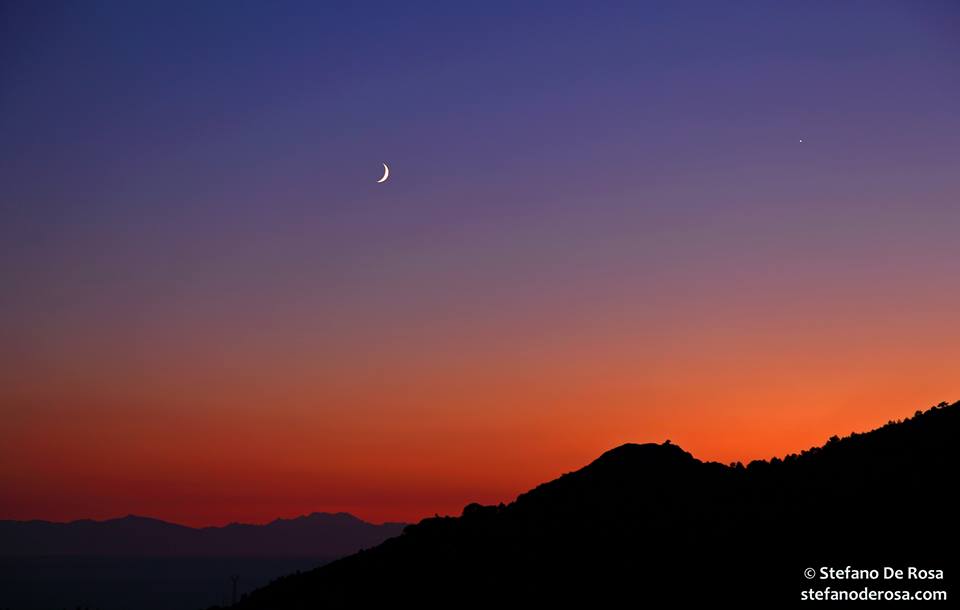 View larger. | Here are the waxing moon and planet Venus (right side of photo) as captured by EarthSky Facebook friend Stefano De Rosa on Isola d’Elba, off the coast of Italy, on August 10, 2013. See more of Stefano’s work here. The moon and Venus will be even closer on September 8.
Venus (dusk to nightfall) Venus, the brightest planet, will remain in the evening sky for the rest of 2013. As seen from the Northern Hemisphere, Venus is fairly low in the western twilight this month. An unobstructed horizon in the direction of sunset is best for observing Venus at dusk and early evening. Meanwhile, Southern Hemisphere observers have a grand view of Venus after sunset this month. Venus, whose cloud cover is very reflective of sunlight, ranks as the third-brightest light in our sky after the sun and moon. It’s considered the planet of love. How can anyone not enjoy Venus when it’s in the evening sky? Watch for the waxing crescent moon to pass close to Venus in the western dusk on September 8. 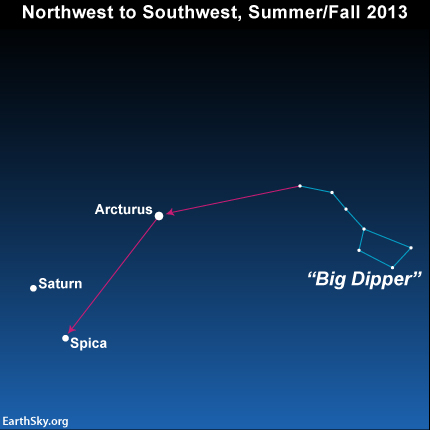 Are you familiar with the Big Dipper, which appears in the northwest at nightfall? If so, you can use the Big Dipper to find Saturn in 2013. Click here for details.
Saturn (dusk until early evening) Saturn is no match for Venus in brightness, but it’s still as brilliant as the brightest stars. It shines like a gentle beacon in the September 2013 nighttime sky. Earth flew between the sun and Saturn on April 28, so Saturn’s time of greatest prominence is our sky is past for this year. This planet can be found in the southwest sky after sunset.
Just as it did last year, Saturn is still shining relatively close to Spica, the brightest star in the constellation Virgo. You can distinguish Saturn from Spica by color. Saturn shines with a golden hue while Spica sparkles blue-white. Binoculars help to accentuate color if you have difficulty discerning the difference with the unaided eye.
Watch for the moon to swing close to the ringed planet Saturn on September 9 and for Venus to swing close to Saturn, starting around mid-September.
Binoculars won’t reveal Saturn’s gorgeous rings, but a small telescope will. The rings are inclined by more than 18o from edge-on in September 2013, showing us their north face. The rings will open most widely in October 2017, displaying a maximum inclination of 27o. As with so much in space, the appearance of Saturn’s rings from Earth is cyclical. In the year 2025, the rings will appear edge-on as seen from Earth. After that, we’ll begin to see the south side of Saturn’s rings, to increase to a maximum inclination of 27o by May 2032.
If you have access to a telescope, you can also seek Saturn’s moons. Saturn’s largest and brightest moon Titan is fairly easy to observe in a small telescope.
Saturn will remain in view in the evening sky until late September or early October 2013.
Jupiter (predawn and dawn sky) Our solar system’s largest planet, Jupiter, will be easy to see before dawn all this month. It will rise a whopping four and one-half hours before the sun in early September and around midnight (Daylight Saving Time) by the end of the month. Watch for the moon to swing near Jupiter on the mornings of September 1 and once again on September 28.
Keep your eye on Jupiter, as this brilliant beauty will help you to find the fainter Mars and the Beehive star cluster. Jupiter – the fourth brightest celestial object after the sun, moon and Venus – is by far the most brilliant star-like object in the September 2013 morning sky.
Want to know more about Mars in September 2013? Read on.
Mars (predawn and dawn sky) Mars becomes a easier to spot before sunrise in September, as it climbs a higher into the predawn sky all month long. Keep in mind that Jupiter shines many times more brilliantly than Mars does, so you may want to use Jupiter (and possibly binoculars) to locate and spot Mars. Use the moon and Jupiter to find Mars on the mornings of September 1 and September 2.
Mercury (dusk/nightfall from Southern Hemisphere) Mercury becomes an visible evening object in the Southern Hemisphere, starting around mid-September. Click here to find out Mercury’s setting time in your sky.
As the innermost planet, Mercury comes and goes in our sky rapidly. It’ll continue its evening apparition throughout September and October, but will swing back to the morning sky by early November.
What do we mean by visible planet? By visible planet, we mean any solar system planet that is easily visible without an optical aid and that has been watched by our ancestors since time immemorial. In their outward order from the sun, the five visible planets are Mercury, Venus, Mars, Jupiter and Saturn. These planets are visible in our sky because their disks reflect sunlight, and these relatively nearby worlds tend to shine with a steadier light than the distant, twinkling stars. They tend to be bright! You can spot them, and come to know them as faithful friends, if you try.
Bottom line: In September 2013, two of the five visible planets – Venus and Saturn – can be found first thing at nightfall. The waning crescent moon swings past the morning planets – Jupiter, Mars and Mercury – in early September. Info and charts here.
Need a sky almanac? EarthSky recommends … 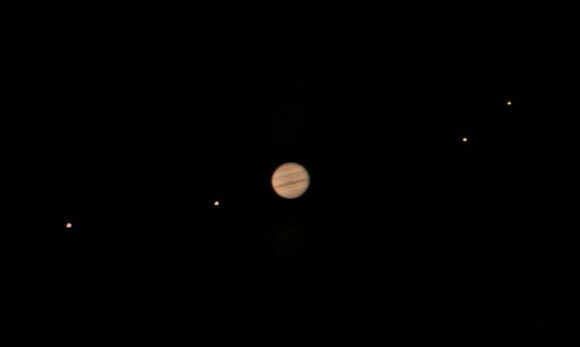 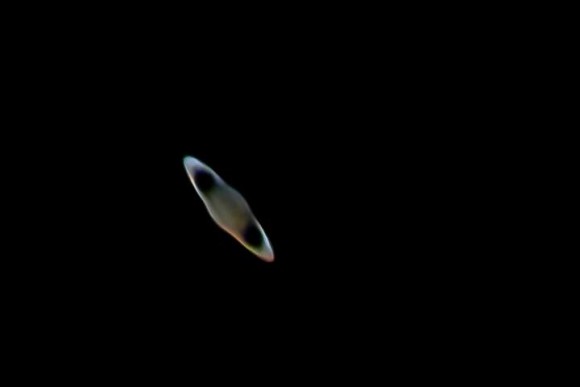 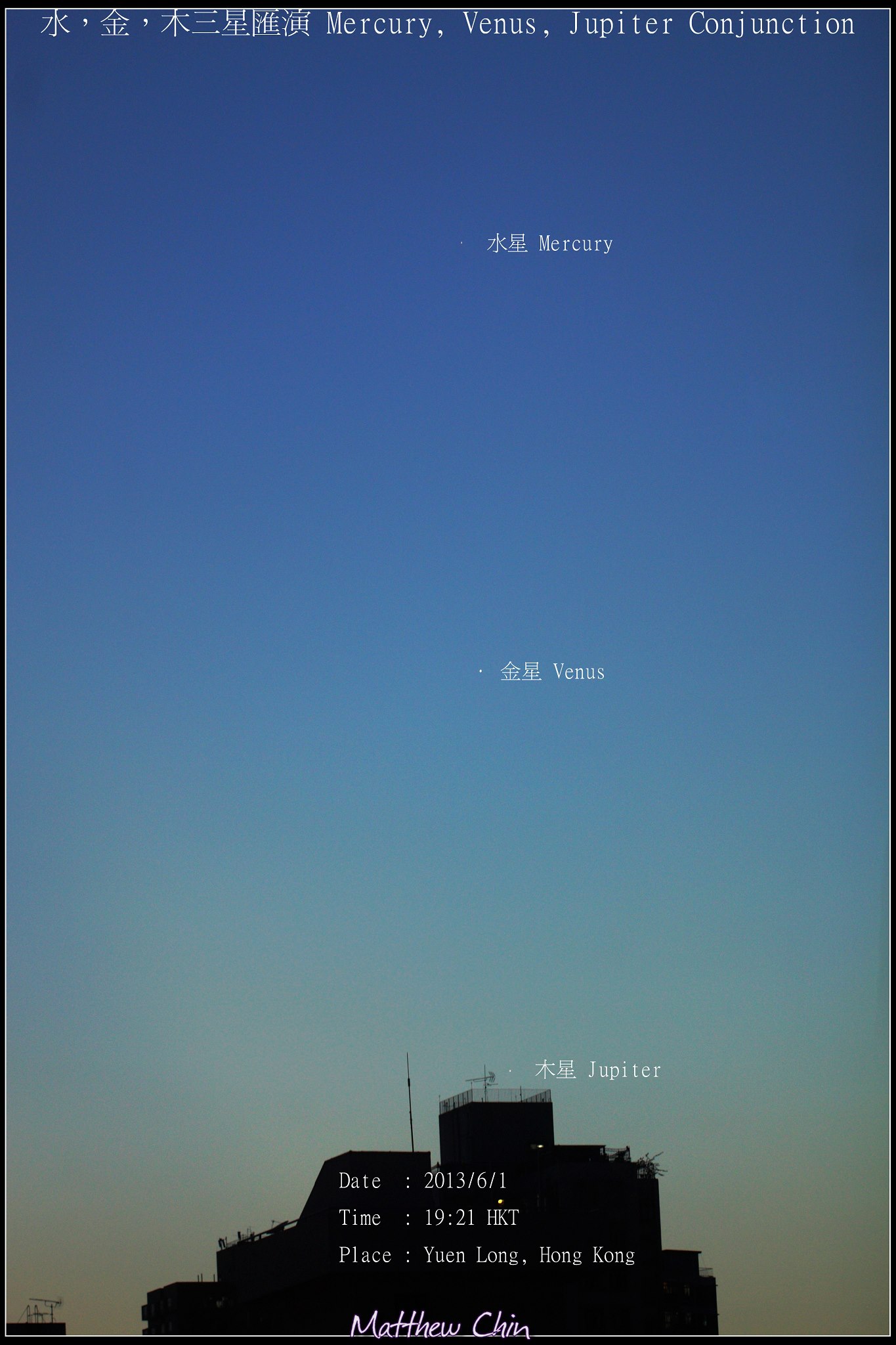 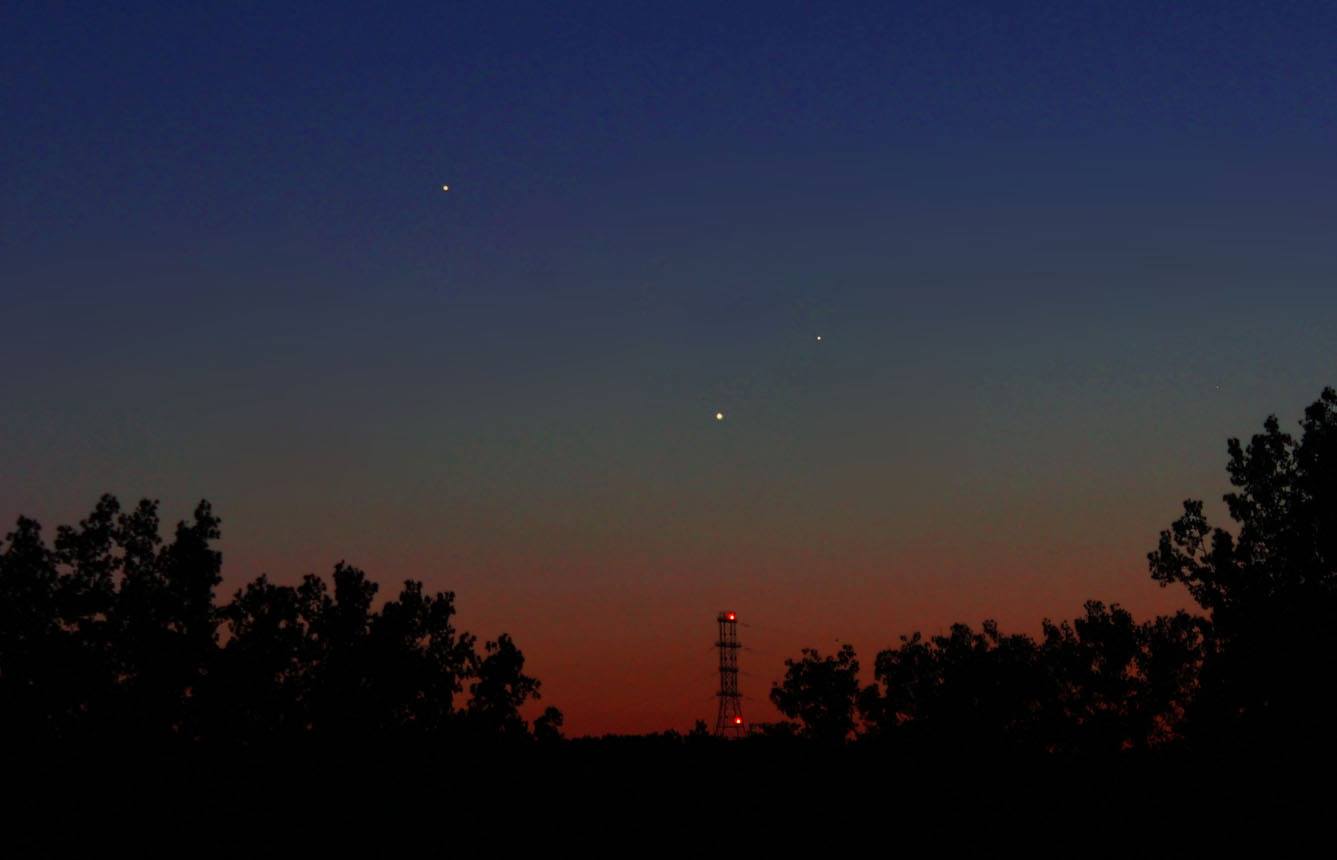 View larger. | The two brightest objects in this photo – and in your evening sky on May 12, 2013 – appeared to be the waxing crescent moon and Jupiter. In reality, an even brighter planet – Venus – was also up, but buried in bright twilight. Photo by EarthSky Facebook friend Daniel McVey. 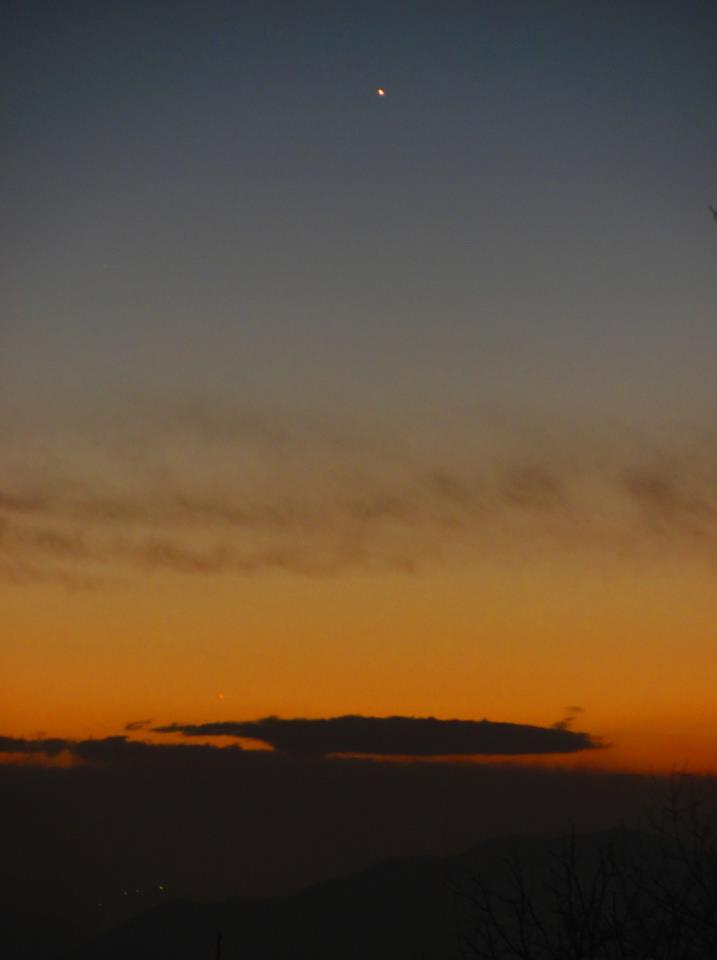 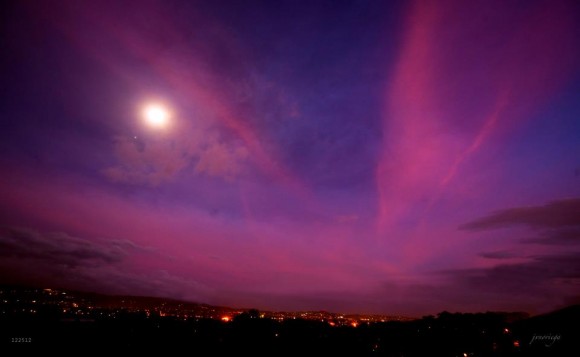 Moon and Jupiter (below moon) on Christmas night, December 25, 2012, as seen from Manila, Philippines by EarthSky Facebook friend Jv Noriega. Thank you, Jv! The moon and planets on the morning of December 11, 2012 as captured by EarthSky Facebook friend Brodin Alain in Burgundy, France. Thank you, Brodin! View larger. The thin waxing crescent moon on the evening of December 14, 2012. Mars is the bright object to the left of the moon. EarthSky Facebook friend Eileen Claffey took this photo. Thank you, Eileen! View larger. 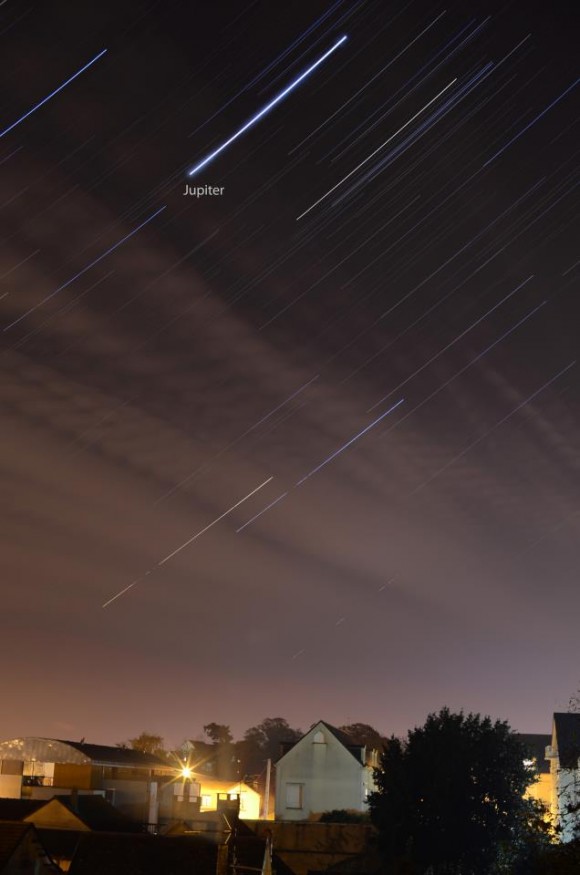 These are called star trails. It’s a long-exposure photo, which shows you how Earth is turning under the stars. The brightest object here is Jupiter! This awesome photo by EarthSky Facebook friend Mohamed Laaifat in Normandy, France. Thank you, Mohamed.