OUT OF MIND » CHANGING ENVIRONMENT & NATURE » ATMOSPHERIC CHANGES » Does Earth have a second moon?

Does Earth have a second moon?

Many planets in our solar system have more than one moon. Mars has two moons, Jupiter has 67, Saturn 62, Uranus 27, Neptune 14. Those numbers keep changing, and you can see a relatively current count of solar system moons here from NASA’s Jet Propulsion Laboratory. It makes sense that the outer worlds, with their stronger gravity, would have more moons. Meanwhile, our planet Earth has just one moon. Doesn’t it?
Moons are defined as Earth’s natural satellites. They orbit around the Earth. And, in fact, although Earth sometimes has more than one moon, some objects you might have heard called Earth’s second moon aren’t, really. Let’s talk about some non-moons first. 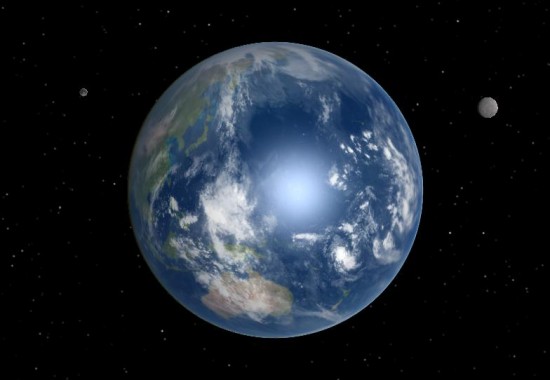 Image of Earth with two moons, generated in Celestia software, by Grebenkov in Wikimedia Commons. 3753 Cruithne in 2001. Astronomer Duncan Waldron discovered this faint asteroid on October 10, 1986, on a photographic plate taken with the UK Schmidt Telescope at Siding Spring Observatory in Australia. Image via Sonia Keys via Wikimedia Commons.

The orbits around the sun of Cruithne and Earth over the course of a year (from September 2007 to August 2008). More information about this animation here.
Quasi-satellites are not second moons for Earth. A quasi-satellite is an object in a co-orbital configuration with Earth (or another planet). Scientists would say there is a 1:1 orbital resonance between Earth and this object. In other words, a quasi-satellite is orbiting the sun, just as Earth is. Its orbit around the sun takes exactly the same time as Earth’s orbit, but the shape of the orbit is slightly different.
The most famous quasi-satellite in our time – and an object you might have heard called a second moon for Earth – is 3753 Cruithne. This object is five kilometers – about three miles – wide. Notice it has an asteroid name. That’s because it is an asteroid orbiting our sun, one of several thousand asteroids whose orbits cross Earth’s orbit. Astronomers discovered Cruithne in 1986, but it wasn’t until 1997 that they figured out its complex orbit. It’s not a second moon for Earth; it doesn’t orbit Earth. But Cruithne is co-orbiting the sun with Earth. Like all quasi-satellites, Cruithne orbits the sun once for every orbit of Earth.

As seen from Earth Cruithne has what is known as a horseshoe orbit. In other words, viewed from Earth, it appears to orbit a point beside Earth. More information about horseshoe orbits here.
Earth’s gravity affects Cruithne, in such a way that Earth and this asteroid return every year to nearly the same place in orbit relative to each other. However, Cruithne won’t collide with Earth, because its orbit is very inclined with respect to ours. It moves in and out of the plane of the ecliptic, or plane of Earth’s orbit around the sun.
Orbits like that of Cruithne aren’t stable. Computer models indicate that Cruithne will spend only another 5,000 years or so in its current orbit. That’s a blink on the long timescale of our solar system. The asteroid might then move into true orbit around Earth for a time, at which time it would be a second moon – but not for long. Astronomers estimate that, after 3,000 years orbiting Earth, Cruithne would escape back into orbit around the sun.
By the way, Cruithne isn’t the only quasi-satellite in a 1:1 resonance orbit with Earth. The objects 2010 SO16 and (277810) 2006 FV35, among others, are also considered quasi-satellites to Earth.
These objects are not second moons for Earth, although sometimes you might hear people mistakenly say they are. Does Earth ever have more than one moon? Surprisingly (or not), the answer is yes.
Read the history of the search for Earth’s second moon here. Asteroids that are captured temporarily by Earth's gravity have crazy orbits around us, because they're pulled from all sides by the Earth, sun and moon. Image Credit: K. Teramuru, UH Ifa
Earth does sometimes have temporary moons. In March of 2012, astronomers at Cornell University published the result of a computer study, suggesting that asteroids orbiting the sun might temporarily become natural satellites of Earth. In fact, they said, Earth usually has more than one temporary moon, which they called minimoons. These astronomers said the minimoons would follow complicated paths around Earth for a time, as depicted in the images above and below. Eventually, they would break free of Earth’s gravity – only to be immediately recaptured into orbit around the sun, becoming an asteroid once more. The little moons envisioned by these astronomers might typically be only a few feet across and might orbit our planet for less than a year before going back to orbit the sun as asteroids.
Read more here: Earth usually has more than one moon Diagram of the orbit for 2006 RH120 during a period of time that it is orbiting the Earth during a temporary satellite capture event. Image via Wikimedia Commons.
Have astronomers detected any of these minimoons? Yes. Writing in the magazine Astronomy in December 2010, Donald Yeomans (Manager of NASA’s Near-Earth Object Program Office at NASA’s Jet Propulsion Laboratory) described an object discovered in 2006 that appears to fit that description. The object – now designated 2006 RH120 – is estimated to be 5 meters (about 15 feet) in diameter. Yeomans said that, when this object was discovered in a near-polar orbit around Earth, it was thought at first to be a third stage Saturn S-IVB booster from Apollo 12, but later determined to be an asteroid. 2006 RH120 began orbiting the sun again 13 months after its discovery, but it’s expected to sweep near Earth and be re-captured as a minimoon by Earth’s gravity later in this century.
Bottom line: That asteroid called 3753 Cruithne is not a second moon for Earth, but its orbit around the sun is so strange that you still sometimes hear people say it is. Meanwhile, astronomers publishing in March of 2012 suggested that Earth does frequently capture asteroids, which might orbit our world for about a year before breaking free of Earth’s gravity and orbiting the sun once more.

OUT OF MIND » CHANGING ENVIRONMENT & NATURE » ATMOSPHERIC CHANGES » Does Earth have a second moon?