OUT OF MIND » PERCEPTUAL AWARENESS » THE SHIFT IN CONSCIOUSNESS » Mathematical Proof That Cooperative, Forgiving and Generous Populations Succeed In The Long-Term While Selfish Ones Fail

Mathematical Proof That Cooperative, Forgiving and Generous Populations Succeed In The Long-Term While Selfish Ones Fail

Mathematical Proof That Cooperative, Forgiving and Generous Populations Succeed In The Long-Term While Selfish Ones Fail Fri Sep 06, 2013 4:15 pm 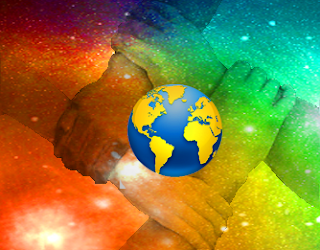 Thanks to R. for this article!

This is fascinating information that explains several things happening today societally, on a more global scale.

The only long term societal structures that can succeed are Generous ones.  Mathematically, and I would postulate psychologically, this means cooperation and reciprocity are more powerful than extortion, over time, in large populations.  This is how nature succeeds as well!

If our nature is to be generous to succeed, as a universal truism it should be provable in all ways, including mathematically.   Apparently this is the case.

Perhaps our politicians would be wise to take note.  Their people are suffering at home in increasingly larger groups.  Is it time to devote resources to the citizenry, that is easily spent elsewhere these days by our elected officials in the billions?  Remember when hurricane Sandy's victims were denied funding by a Senator for being too expensive to care for?   This person now wants to allocate billions in an overeseas venture that has no winners.  This is old thinking, evolutionarily, it is becoming more extinct as the days and years roll by.

Overall, good news for the evolving planet, and it's people!

"You might think being generous would be a stupid thing to do, and it is if there are only two players in the game, but, if there are many players and they all play generously, they all benefit from each other's generosity."

In generous strategies, which are essentially the opposite of extortion strategies, players tend to cooperate with their opponents, but, if they don't, they suffer more than their opponents do over the long term. "Forgiveness" is also a feature of these strategies.

Plotkin said. "It's not just in humans. Of course social insects behave this way, but even bacteria and viruses share gene products and behave in ways that can't be described as anything but generous."


September 5, 2013 BY MICHAEL FORRESTER
Mathematical Proof That Cooperative, Forgiving and Generous Populations Succeed In The Long-Term While Selfish Ones Fail

War is the epitome of a selfish and power hungry mentality that destroys the true spirit of humanity. University of Pennsylvania biologists offer a mathematically based explanation for why cooperation, forgiveness, altruism and generosity succeed in the long-term benefit of populations where selfish and disharmonious intentions fail.

Their work builds upon the seminal findings of economist John Nash, who advanced the field of game theory in the 1950s, as well as those of computational biologist William Press and physicist-mathematician Freeman Dyson, who last year identified a new class of strategies for succeeding in the classical game theory match-up known as the "Prisoner's Dilemma."

Postdoctoral researcher Alexander J. Stewart and associate professor Joshua B. Plotkin, both of Penn's Department of Biology in the School of Arts and Sciences, examined the outcome of the Prisoner's Dilemma as played repeatedly by a large, evolving population of players. While other researchers have previously suggested that cooperative strategies can be successful in such a scenario, Stewart and Plotkin offer mathematical proof that the only strategies that succeed in the long term are generous ones. They report their findings in this week's issue in PNAS.

"These types of leader characteristics are able to influence people's motives in such a way that they no longer care only about their self-interests, but also the goals of the group and the organization," a transition that is crucial to the success of the entire group, de Cremer stated.

Understanding Why Cooperation and Generosity Win
"Ever since Darwin," Plotkin said, "biologists have been puzzled about why there is so much apparent cooperation, and even flat-out generosity and altruism, in nature. The literature on game theory has worked to explain why generosity arises. Our paper provides such an explanation for why we see so much generosity in front of us."

"Last year William Press and I proposed the 'extortion strategy' in the game of Prisoner's Dilemma, enabling one player to maintain a dominant position over the other," said Dyson, who is retired as a professor of physics at the Institute for Advanced Studies in Princeton, N.J. "One year later, Stewart and Plotkin turned our strategy upside down and showed that it enables one player to coax the other gently toward collaboration. They understood our strategy better than we did. They reached by rigorous mathematics the happy conclusion that, in a game between ruthless antagonists, generosity wins."

The Prisoner's Dilemma is a way of studying how individuals choose whether or not to cooperate. In the game, if both players cooperate, they both receive a payoff. If one cooperates and the other does not, the cooperating player receives the smallest possible payoff, and the defecting player the largest. If both players do not cooperate, they receive a payoff, but it is less than what they would gain if both had cooperated. In other words, it pays to cooperate, but it can pay even more to be selfish.

In the Iterated Prisoner's Dilemma, two players repeatedly face off against one another and can employ different strategies to beat their opponent. In 2012, Press and Dyson "shocked the world of game theory," Plotkin said, by identifying a group of strategies for playing this version of the game. They called this class of approaches "zero determinant" strategies because the score of one player is related linearly to the other. What's more, they focused on a subset of zero determinant approaches they deemed to be extortion strategies. If a player employed an extortion strategy against an unwitting opponent, that player could force the opponent into receiving a lower score or payoff.

Stewart and Plotkin became intrigued with this finding, and last year wrote a commentary in PNAS about the Press and Dyson work. They began to explore a different approach to the Prisoner's Dilemma.

Instead of a head-to-head competition, they envisioned a population of players matching up against one another, as might occur in a human or animal society in nature. The most successful players would get to "reproduce" more, passing on their strategies to the next generation of players.
It quickly became clear to the Penn biologists that extortion strategies wouldn't do well if played within a large, evolving population because an extortion strategy doesn't succeed if played against itself.

"The fact that there are extortion strategies immediately suggests that, at the other end of the scale, there might also be generous strategies," Stewart said. "You might think being generous would be a stupid thing to do, and it is if there are only two players in the game, but, if there are many players and they all play generously, they all benefit from each other's generosity."

Selfish Strategies Never Succeed In Benefiting Long-Term Populations
Stewart noticed the first of these generous approaches among the zero determinant strategies that Press and Dyson had defined. After simulating how some generous strategies would fare in an evolving population, he and Plotkin crafted a mathematical proof showing that, not only can generous strategies succeed in the evolutionary version of the Prisoner's Dilemma, in fact these are the only approaches that resist defectors over the long term.

"Our paper shows that no selfish strategies will succeed in evolution," Plotkin said. "The only strategies that are evolutionarily robust are generous ones."

The discovery, while abstract, helps explain the presence of generosity in nature, an inclination that can sometimes seem counter to the Darwinian notion of survival of the fittest.

A leader who uses his or her personality to instill people with a personal motivation to cooperate can be more successful than one who relies on so-called "extrinsic" motivations, such as denying them a promotion or raise if they don't work for the group. In these situations, they are just motivated to get around all these negative things and once the penalties are lifted for not cooperating, people are often no longer inspired to do so.

"When people act generously they feel it is almost instinctual, and indeed a large literature in evolutionary psychology shows that people derive happiness from being generous," Plotkin said. "It's not just in humans. Of course social insects behave this way, but even bacteria and viruses share gene products and behave in ways that can't be described as anything but generous."

A study by researchers at Universidad Carlos III de Madrid and Universidad de Zaragoza has determined that when deciding whether to cooperate with others, people do not act thinking in their own reward, as had been previously believed, but rather individuals are more influenced by their own mood at the time and by the number of individuals with whom they have cooperated before.

After analyzing the information, the main conclusion drawn by the researchers is that in a situation where cooperating with others is beneficial, the way the individuals involved are organized into one social structure or another is irrelevant. A first analysis contradicts what many researchers have held based on theoretical studies.

"A population that encourages cooperation does well," Stewart said. "To maintain cooperation over the long term, it is best to be generous."

Ruling out that network organization influences in the cooperation of people, and having discovered that what is important is reciprocity, that is, cooperating according to cooperation received, will radically change the focus of a significant number of researchers who are developing theories on the emergence of cooperation among individuals.

Michael Forrester is a spiritual counselor and is a practicing motivational speaker for corporations in Japan, Canada and the United States.
Posted by Obi-Wan Kabuki at 8:20 PM

OUT OF MIND » PERCEPTUAL AWARENESS » THE SHIFT IN CONSCIOUSNESS » Mathematical Proof That Cooperative, Forgiving and Generous Populations Succeed In The Long-Term While Selfish Ones Fail