OUT OF MIND » TRUTH IN CONSPIRACY THEORIES? » HISTORIES MYSTERIES » What Ever Happened To The Capstone of The Great Pyramid Khufu?

What Ever Happened To The Capstone of The Great Pyramid Khufu?

What Ever Happened To The Capstone of The Great Pyramid Khufu?


The Mystery of the Missing Pyramidion of Khufu

One of the mysteries of Giza is the missing pyramidion or capstone of the Great Pyramid of Khufu. Since modern recorded history, the Great Pyramid has been topless, with several meters of its apex missing. Egyptologists have assumed that the pyramid was originally capped by a small pyramid called a pyramidion. If that is true, then what happened to it, and what could it have looked like? 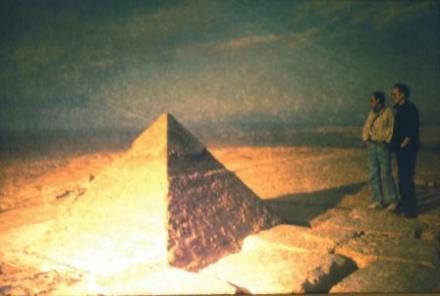 It is possible, indeed highly probable, that the great Egyptian architect and royal vizier, Imhotep, was still alive when Khufu planned his pyramid. Imhotep was the High Priest of Heliopolis, where the sacred Benben Stone was kept, and on its shape and symbolism was modeled the gilded capstones of pyramid called ‘Benben-t’. Could Imhotep have advised Khufu to conceal the Benben in his pyramid? But where?

This article below is culled from a discussion in Appendix 1 of my latest book, co-written with Thomas Brophy, Ph.D., Imhotep The African: Architect of the Cosmos (Disinformation Books).

In October 1900 the guards of the Egyptian Antiquities Organisation (EAO) in the area of Dashur, a site on the western desert that is some 20 kilometers south of modern Cairo, were attacked by a group of armed brigands. A few days later, Gaston Maspero, the head of the EAO went to inspect the site. It was then that he was taken to see an amazing and rather unique artifacts that had been found embedded in the sand near a pyramid of the 12th Dynasty belonging to the pharaoh Amenemhet III. There, sticking partially out of the sand, was a magnificent pyramidion made of black granite. Maspero could hardly believe his eyes at the amazing preservation of this 4000 years old artifacts which, in his excitement, he described as “polished like a mirror”. The pyramid, which measured 1.85 meters at the base and had a height of 1.40 meters, was decorated with wonderful inscriptions. On one face was a winged solar-disk flanked by two ureus (sacred cobras), and under the solar-disk were two large eyes. Under the eyes were three lutes with a large sun disk underneath. On each side of the sun-disk were the royal cartouches bearing the names of Amennemhet III, and at the base of the triangular face were two lines of hieroglyphs. In an article published in the Annales Du Services Des Antiquités in 1902, Maspero gave this translation:

"May the face of the king be opened so that he may see the Lord of the Horizon when he crosses the sky; may he cause the king to rise as a god, lord of eternity and indestructible... Horakhti has said I have given to the king of Upper and Lower Egypt the beautiful horizon who takes the inheritance of the two lands...so that you may unit with the horizon...the horizon has said that you rest upon it, which pleases me." 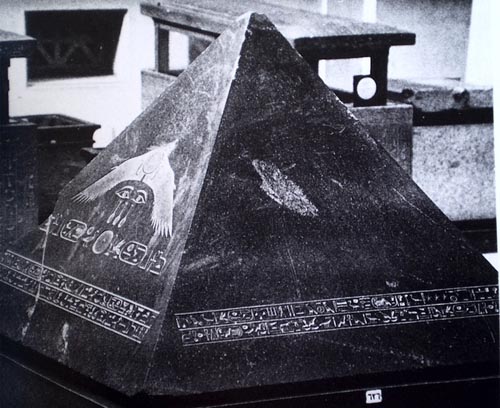 OUT OF MIND » TRUTH IN CONSPIRACY THEORIES? » HISTORIES MYSTERIES » What Ever Happened To The Capstone of The Great Pyramid Khufu?

» Danny Wilten - The Missing Capstone Of The Great Pyramid
» The Hidden Secrets of Khufu's Pyramid Finally Answered?
» Great Pyramid Stargate ~ Egypt archaeologist criticises pyramid void 'discovery'
» The Giant Pyramid Hidden Inside a Mountain Dwarfs the Great Pyramid In Giza
» This is the Worlds LARGEST confirmed PYRAMID and it DWARFS the Great Pyramid of Giza