Dramatic pairing of moon with Venus after sunset September 8 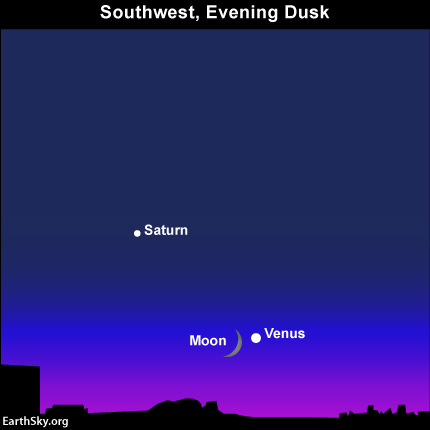 The two brightest nighttime objects – the moon and Venus – pop out into the western sky almost immediately after sunset on September 8, 2013. From around the world as darkness falls on this night, these two brilliant worlds couple up closely together – but most especially so from the Americas. They will be beautiful! Just be sure to look for them as soon as darkness begins to fall. The moon and Venus won’t be up for long after sunset.
Today is also your best chance in 2013 to see Venus during the day. Click here for more. 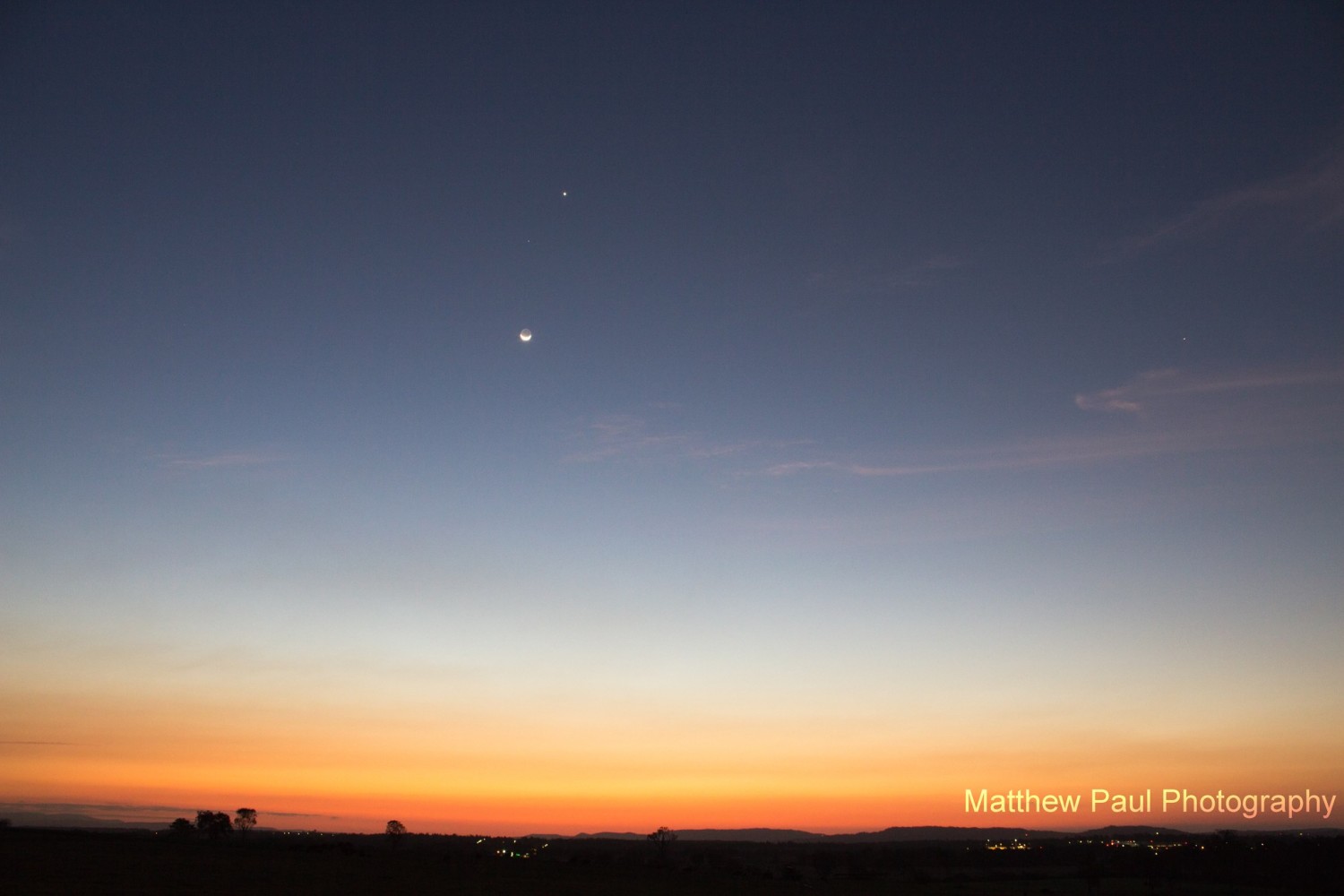 View larger. | Young moon and Venus as seen earlier today – Sunday, September 8, 2013 – by EarthSky Facebook friend Matthew Paul Photography in Ipswich, Queensland, Australia. Visit Matthew’s Facebook page. The moon will move closer to Venus throughout the day today. As sunset falls across the Earth, we will all see the moon creeping closer to Venus. By the time sunset falls in the Americas, the moon will be dramatically close to Venus on Sunday evening, September 8. Look west! View larger. | On September 8, 2013, the moon and Venus will be very close together in the west after sunset. Best from the Americas. Great from Europe and Africa. Good from anywhere around the world. Start looking for the moon and Venus about 30 minutes after sunset. Look west. This simulated view made by Stellarium software, via skyandtelescope.com. Many people with telescopes will be on the watch out for Comet ISON, which stays close to Mars in the September 2013 predawn sky. Click here for more September finder charts for Comet ISON.
If you’re at the right place in South America on September 8, the moon will occult – cover over – Venus for up to an hour. At Melo, Uruguay, for instance, the moon passes in front of Venus on September 8, 2013, from 8:02 to 8:54 p.m. local time. Click here for more information on the September 8 occultation of Venus.
Watch the moon from night to night, and you’ll see that it travels eastward relative to the backdrop planets and stars. Notice the planet Saturn above the moon and Venus this Sunday night, and then look at the the moon and these two planets at the same time tomorrow (Monday, September 9). You’ll see that the moon has traveled eastward, in the direction of Saturn.
The moon, Venus and Saturn will sink westward as dusk deepens into night tonight. Eventually, all three will follow the sun beneath the horizon during the evening hours. Saturn will be the last of these worlds to set. However, the supposed westward motion of these worlds is really a reflection of the Earth rotating eastward on its axis.
Setting times of the sun, moon and planets in your sky
To get an idea of the moon’s true orbital motion around Earth, observe the moon at the same time each evening as it waxes toward full moon. Its change of position and waxing phase reveal that the moon is increasingly moving east of the setting sun day by day.
Watch for the waxing crescent moon to couple up with Venus this Sunday, September 8, and to pair up more closely with Saturn tomorrow, on Monday, September 9.
What is earthshine?
Bruce McClure