Via Message to Eagle, 3 September 2013 - Archaeologists have made an astonishing discovery. A 5,000 year-old skull of unknown origin was accidentally found on the banks of a river in Worcershire by a walker who thought it was a coconut. 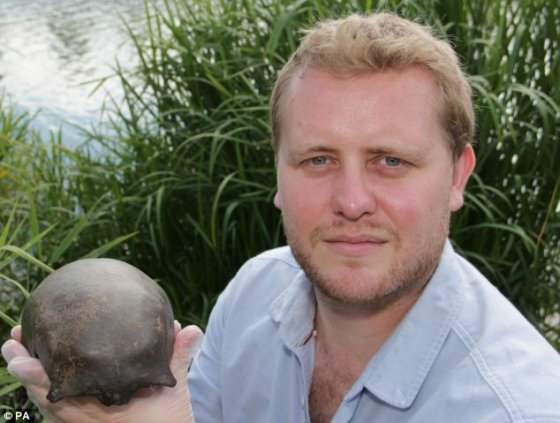 The dog walker stumbled across the fragment, which measures 15cm by 10cm (6in by 4in), this year but initially thought it was part of a ball or a coconut shell. The next day he returned to the site on the banks of the Avon near Pershore, Worcestershire, for a closer look and, realising what it was, called police.


The skull is assumed to have belonged to a middle-aged woman from the neolithic period - around the time Stonehenge was built.

What makes the skull so unique is how well-preserved it is and scientists find it hard to believe it could have been kept underwater for so long. So where did it come from and how did it end up in the river?

"When I first saw the skull, I thought it may have been Anglo-Saxon or Roman but I knew that it was not recent due to the colour," said Nick Daffern, senior archaeologist.

"But we were all surprised when the radiocarbon dating put it at between 3,338 BC and 3,035 BC, or about the middle neolithic period.

"It is so well preserved, it is unthinkable that this had been in the river for any length of time which begs the question as to where it has come from."We know of Roman, Saxon and medieval burials along the river, but this is very rare - it is an exceptional find. "

He added: "I don't think it was found where the remains were buried.

I think we've got a riverside burial and then flooding has brought this down the river. Finding that burial site though would be like finding a needle in a haystack."

Daffern said that without the rest of the skeleton it was difficult to draw conclusions about the person found, and certainly there is no clue as to how they met their death. 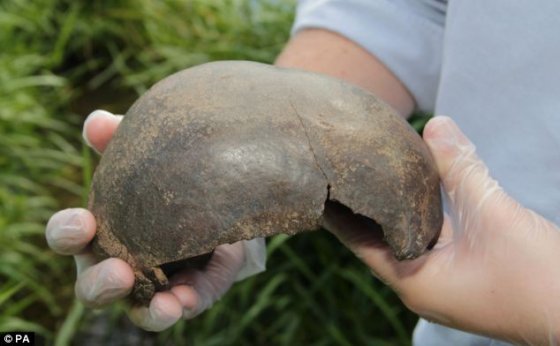 The origin of the skull is unknown.
"Myself and a forensic anthropologist believe it is a woman due to the slightness of the skull and the lack of any brow ridges although our conclusions are very tentative because we're dealing only with the top of a skull," he said. 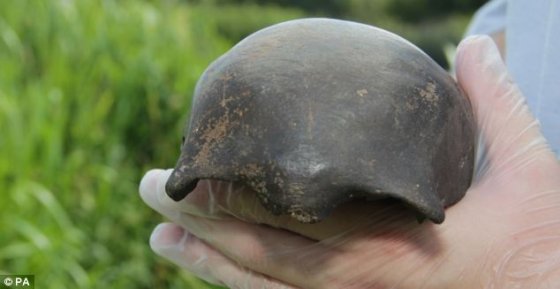 How did the skull end up in the river?
"There's no trauma to the bone, and where it has broken those are natural breaks, nor is there any sign of disease so we've no idea as to cause of death.

"The natural fusion of the bone in the skull leads me to believe it may be an older woman, possibly in her 50s, but that is very tentative again.

Unfortunately, it remains a bit of a mystery."

The find is a few miles from Bredon hill, which has been a scene of human activity down the ages and still boasts the earthen ramparts of an iron age hill fort. However, finds of neolithic remains are rare.

"Whenever we come across neolithic remains, there seems to be a solid dividing line between where they buried their dead and where they lived, and that is no accident," he said. "But it is frustrating as an archaeologist because although we have the physical evidence, we still don't have the answers as to why."