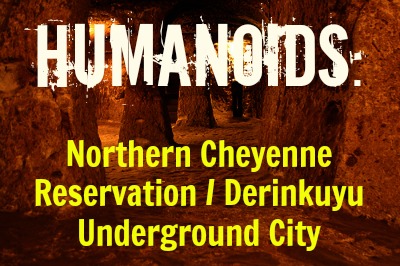 My friend and colleague Albert Rosales of the Humanoid Sighting Reports & Journal of Humanoid Studies forwarded the following reports:

In the Northern Cheyenne Reservation three young cousins were playing hide and seek in the hills behind their grandmother’s house about 150 yards from the house when one of the cousins was heard screaming. This cousin had been alone further up the hill and immediately the other two went running to his location to see what was wrong. Suddenly they saw her running down the hill yelling, “He is coming! He is coming!’ they all look to see what appeared to be ‘a little green man-like figure’ chasing after her. At this point they all screamed and ran down the hill, with the strange green little man closely behind them. Their grandmother heard the screaming and she ran out the back porch to see the kids running towards the house and the little green man chasing them. When the little green man reached a point near the house it suddenly stopped and just stood there watching the house. The little green figure stood there watching the house until sundown. The rest of the family was called over to the house and waited up all night but in the morning the strange little green man had vanished. Among the locals there are rumors that little green men live up in the mountains.

Around the same time another group was camping on the reservation in between three small hills when suddenly rocks and boulders of all sizes began raining down on the men. Suddenly a huge boulder landed on the fire and embers went flying everywhere. At this point the men ran away from the area and as they looked back were stunned to see a huge bipedal ‘deer-man’ with a human type torso and a deer-like head with antlers. The bizarre creature appeared to be jumping back and forth over the dying campfire with great agility and watching them.

We, the Northern Cheyenne People : our land, our history, our culture

Bury My Heart at Wounded Knee: An Indian History of the American West

During a localized UFO wave in the region a medium M.N. (refused to divulge his name) decided to visit the famous underground “galleries” at Derinkuyu. However while doing this he became lost in the caves. While attempting to return to the surface level he suddenly encountered a black hooded figure that was standing in a cavity on the wall of the galleries. The faceless entity just stood there staring at the witness with two glowing reddish eyes. Terrified the witness attempted to run from the location but realized that he was totally unable to move, he then apparently passed out. Later a group of tourists found him lying on the ground but apparently unharmed. He soon recovered and never returned to the galleries again.

The underground city at Derinkuyu has all the usual amenities found in other underground complexes across Cappadocia, such as wine and oil presses, stables, cellars, storage rooms, refectories, and chapels. Unique to the Derinkuyu undergorund city complex and located on the second floor is a spacious room with a barrel vaulted ceiling. It has been reported that this room was used as a religious school and the rooms to the left were studies. Between the third and fourth levels is a vertical staircase. This passage way leads to a cruciform church on the lowest level.

The large 55 m ventilation shaft appears to have been used as a well. The shaft also provided water to both the villagers above and, if the outside world was not accessible, to those in hiding. First built by the Phrygians in the 8th–7th centuries B.C according to the Turkish Department of Culture, the Derinkuyu underground city was enlarged in the Byzantine era. The city could be closed from inside with large stone doors. With storerooms and wells that made long stays possible, the city had air shafts which are up to 100 feet (30 m) deep. Derinkuyu is the largest excavated underground city in Turkey. The complex has a total 11 floors, though many floors have not been excavated. It has an area of 2,000 square feet, with a possible total area of 7,000 square feet (650 m2). Each floor could be closed off separately. The city was connected with other underground cities through miles of long tunnels. The city could accommodate between 20,000 and 50,000 people.

Derinkuyu is by no means the only such city you can visit here. There are actually 40 or so subterranean settlements in the area although only a few are open to the public.

It is in Derinkuyu District that is almost 30 km to Nevsehir, on Nevsehir - Nigde road. - cappadociaturkey.net

From the Ashes of Angels: The Forbidden Legacy of a Fallen Race

The Attack in Cappadocia