OUT OF MIND » PERCEPTUAL AWARENESS » THE SHIFT IN CONSCIOUSNESS » The Fox Sisters: Birth of Spiritualism

The Fox Sisters: Birth of Spiritualism

The Fox Sisters: Birth of Spiritualism 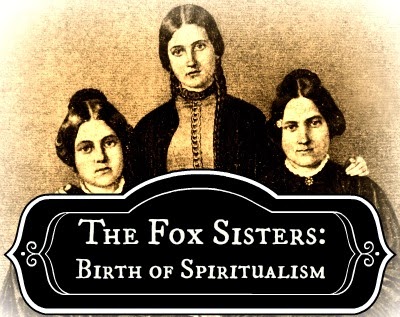 Here is a newspaper article from 1897 commemorating the Fox Sisters and the birth of Spiritualism. I have followed the post with links to current articles on the subject:

They Were Nearly Mobbed in Rochester, and Their Seances Made a Tremendous Sensation--Proposition to Make a Spiritual Museum of the Old Fox Cottage

Almost unnoticed by the general public, prominent spiritualists recently held a convention at Rochester to commemorate the forty-ninth anniversary of the “Rochester rappings.” Noted believers from all over the country were in attendance, and Fitzhugh hall was the scene of materializations and spiritual manifestations of many kinds. Aside from the seances and tests, the main business of the spiritualists was to start a fund to be used in erecting a memorial to the Fox sisters.

Rochester has the reputation of being the birthplace of spirit rappings, but this reputation is not wholly justified by facts. The real birthplace was Hydesville, a small town near Rochester.

The phenomena of spirit rappings began in March 1848, in the home of John D. Fox in Hydesville. The Fox family were known and respected throughout Wayne county. The children, Margaret and Kate, aged 12 and 9 years, respectively, were at home when the family was startled by the mysterious rappings that were heard nightly upon the floor in one of the bedrooms and sometimes in other parts of the house. A patter of footsteps sometimes was heard, and bed clothes were often pulled off. Both sisters declared many times that cold hands passed over their faces.

The noises became so pronounced that the aid of neighbors was called in, and an effort was made to trace the mysterious sounds of their cause. All attempts at investigation were baffled, and the Fox house soon became noted as being haunted, and many wild stories were afloat of mysterious lights that glimmered weirdly above the roof and of pale phosphorescences that danced about the yard at midnight. Children held the place in horror, and even cool-headed men hesitated about driving near the place at midnight.On the night of March 31, when the raps first occurred, little 9-year-old Kate imitated them by snapping her fingers, and the raps resounded by the same number of sounds. Kate then said: “Now, do as I do. Count one, two, three, four, five, six,” at the same time striking her hands together. A similar number of raps responded and at similar intervals.

“Count ten,” said the mother of the girls, and ten distinct knocks were heard.

One of the questions as to the cause of the rappings received the answer that it was the spirit of a man who had been murdered in the house some years before. The matter was investigated, and the remains of a human are said to have been found buried in the cellar.

The stories of the Fox cottage finally became so notorious that the family was made uncomfortable thereby, and it finally moved to Rochster. The trip from Hydesville to Rochester was made by the Erie canal, and Mrs. Fox was fancying that the rappings had been left behind when they were heard on the floor of the cabin boat.

After a number of meetings had been held in the home of Mrs. Fish, in Rochester, the spirits insisted that a public meeting be held, but this was opposed by the family, and the “invisibles” declared that they would leave the house unless their wishes were complied with.

The rappings did cease for a time when nothing was done, and it was finally decided to hold a meeting, as the spirits had requested, and it was held in the old Corinthian hall on the evening of Nov. 14, 1849. A number of prominent citizens appeared on the platform with Mrs. Fish and her sister Margaret Fox, the medium. The hall was filled. The phenomena were manifested freely and were subjected to many tests. A committee appointed to investigate the proceedings reported that it was unable to trace the phenomena to any mundane agency.

The report was a disappointment to the majority of those present, for the skeptics had expected a thorough exposure. A second committee was appointed, consisting of prominent men. The investigation was conducted at the office of Chancellor Whittlesey. Mrs. Fish and Margaret Fox were placed in a number of different positions, and every precaution was taken to prevent fraud, and as a result of the investigation it was the unanimous opinion of the committee that the sounds were “inexplicable.”

By this time the excitement in the city was intense. Much dissatisfaction was expressed at the methods of the committee, and a third one was appointed, among its members being two physicians. This committee was even more exacting in its tests but was unable to discover the cause of the sounds.

When it reported failure, there was almost a riot. Threats were freely made against the lives of the mediums, and the assistance of the police was asked. These precautions proved necessary, as the audience, frantic with excitement, made a determined rush for the platform, shrieking maledictions and hurling threats at the two slender, pale, but composed women, who seemed not to heed the angry surgings of the mob.

It required the utmost efforts of the squad of police to remove the Fox sisters to a place of safety. Never since those first days of spirit rappings has Rochester been in the throes of such wild and general excitement. During the first year it took a degree of moral and physical courage to be a spiritualist.

In 1850 the Fox girls gave seances in New York, and the alleged spiritual manifestations became the subject of extensive discussion. Mediums sprang up all over the country and were multiplied by thousands.

For years the Fox sisters startled the country, but as time passed the interest in spirit rappings and other alleged phenomena grew gradually less and finally seemed to die altogether. Â One of the Fox sisters married Dr. Kane, the Arctic explorer, while the younger sister, Kate, married a Dr. Couken, a prominent physician.

“There should be some memorial of the Fox sisters in Rochester,” said Mr. Kates, who was chairman of the convention, to the correspondent of the Chicago Record. “Next year will be the semicentennial of the discovery of the rappings, and we should have at that time some tangible evidence to offer of their birth. I suggest obtaining possession of the Fox cottage, inclose it and establish therein a spiritual museum, where all the various manifest tokens received from the spirit world, the historical things indicating the growth of movement, could be collected. In time a spiritual college might be erected, and it would serve admirably as an annual meeting place. Next year the national association will hold the great jubilee, probably in Rochester, and it will be second to nothing in the history of the movement. 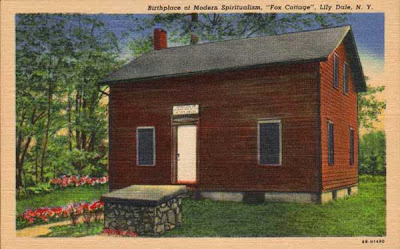 NOTE: Here are links to several interesting articles pertaining to the Fox Sisters and the beginning of Spiritualism:

Talking to the Dead: Kate and Maggie Fox and the Rise of Spiritualism

Talking to the Other Side: A History of Modern Spiritualism and Mediumship: A Study of the Religion, Science, Philosophy and Mediums that Encompass this American-Made Religion

History of Spiritualism, The

OUT OF MIND » PERCEPTUAL AWARENESS » THE SHIFT IN CONSCIOUSNESS » The Fox Sisters: Birth of Spiritualism