The Most Important Financial Article You Will Ever Read

The Problem: the ramifications of the collapse of “emerging market” currencies against the “king dollar” over the past six months; not un-coincidentally, since the [Rothschild] Fed commenced its lethal “QE4” program.  The root cause of global inflation – and ultimately, HYPERINFLATION, is unfettered MONEY PRINTING by the holder of the world’s “reserve currency” – i.e, the [Rothschild Corporate] United States.
That is, the [Rothschild] Fed’s printing presses are injecting TRILLIONS into the global “bloodstream” each year; and given that it remains the world’s largest trading and currency reserve platform, the “trickle-down effect” causes MASSIVE inflation across the four corners of the globe.  However, until I did the research summarized below, I could not have imagined how universally destructive the Fed has become; nor how close we are to the END GAME of global currency collapse.

When you see what I am about to present, you’ll know EXACTLY why this week’s G-20 meeting could be historic.  There is NO DOUBT the Fed’s worldwide currency destruction will be the TOP point of discussion (if we haven’t started World War III by bombing Syria beforehand); and don’t forget that, for the first time EVER, the U.S. will NOT be attending – under the pathetic guise of outrage about Russia granting Edward Snowden asylum.
In other words, the U.S. dollar-based, global fiat PONZI SCHEME has reached itsterminal phase – causing ALL global currencies to collapse against the dollar, whilst the dollar itself plunges against ITEMS OF REAL VALUE like the commodities necessary to sustain life.  And thus, you can see why this year’s efforts to suppress the historical inflation “barometers” – i.e., GOLD and SILVER – have been so maniacal; not to mention, why such PAPER efforts are causing a worldwide run on the scarce, dwindling supply of PHYSICAL metal.
So without further ado, I present my “currency analysis masterpiece” – depicting how ALL the world’s currencies have fallen against the dollar in both the past six months and two years; but for marginal gains in the two-year time frame by, LOL, the Ugandan and Kenyan Shillings.  On a population-weighted basis, the average currency has declined by 10% versus the dollar over the past six months, and a whopping 20% over the past two years.  And this, whilst the Fed was holding interest rates at ZERO and printing $85 TRILLION per month to monetize the ever-exploding U.S. debt… 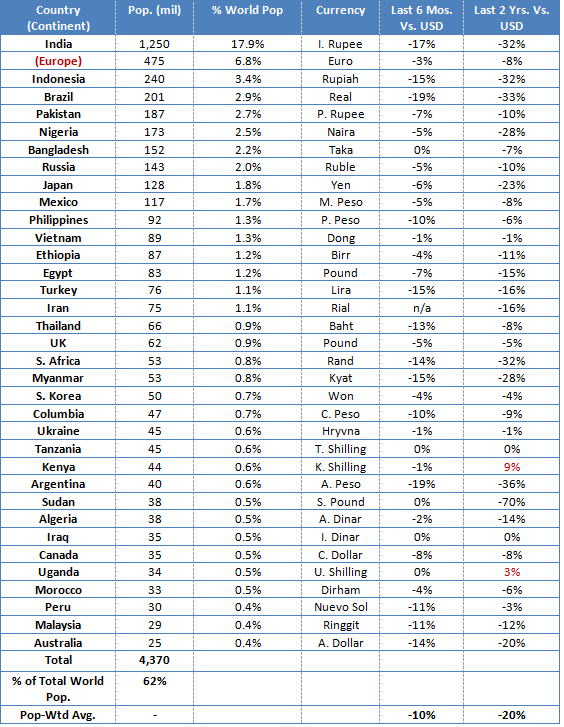 As you can see, the nations included comprise 62% of the global population.  If I included the U.S. itself and China that figure would rise to 86%; and you KNOW the bottom 14% of “fourth-tier” nations” currencies fared no better than the rest.  Moreover, as China has pegged the Yuan to the dollar for the past decade – albeit more loosely in recent years – it, too, has exposed itself to Fed-exported inflation; which is why even heavily understated Chinese data depicts a nearly quintupling of its CPI since 1985.
FYI, such currency plunges are not just felt by “speculators” in the commodity markets, but BILLIONS of citizens via the INFLATION such events engender. A handful of bankers may benefit; but for the rest of us, we experience weaker economic activity and rising prices of life’s necessities.  Moreover, while GOLD and SILVER prices may be higher in these nations, so is EVERYTHING else; and for those that haven’t PROTECTED their assets with Precious Metals, overall purchasing power dramatically declines. Based on this damning table, one might conclude the dollar has been “strengthening”; when in fact, NOTHING could be more untrue.

It is well known that the dollar’s purchasing power has lost more than 98% of its value since the Fed came to being in 1913; but sadly, this progression has accelerated dramatically since abandonment of the gold standard in 1971.

THIS IS WHAT IS ACTUALLY TAKING PLACE RIGHT NOW!
Claiming U.S. Wealth Of Gold And In Its Place Like A Tooth Fairy Leaving Only ‘Worthless Fiat Printed USD Money’.
NIXON ILLEGALLY DROPPED OUR GOLD BACKING FOR ROTHSCHILD TO PILFER THE U.S. WITH PAPER. NOW THAT THE U.S. IS SMOTHERED WITH FORCED PAPER [ARTIFICIAL] DEBT ~ ROTHSCHILD HAS BEEN [MERGING] THE GOLD FROM LIBYA TO HIS VAULTS. ONE OF ROTHSCHILD’S VAULTS IS NOW BAGHDAD. THIS IS WHY ROTHSCHILD’S COMEX HAS ALSO BEEN ARTIFICIALLY DUMPING THE GOLD/SILVER CHARTS -> TO GET PEOPLE OUT OF THE GOLD/SILVER MARKET -> JUST REMEMBER SILVER IS 5Xs MORE SCARCE THAN GOLD AND INDUSTRY USES SILVER FAR MORE SO THAN GOLD. JUST WAIT UNTIL THE BOTTOM IS HIT ON THIS ONE ~ THE PRECIOUS METALS MARKET WILL SKY ROCKET INTO INFINITY AND THOSE MESMERIZED BY FOOTBALL GAMES AND PARIS HILTON WILL BE EATING CAT FOOD IN THE ALLEYS I AM VERY SORRY TO SAY THIS IS THE ELITIST GAME AND THATS HOW THESE SOCIOPATHS THINK AND THIS IS ALSO HOW WE AMERICANS GAVE UP ON OUT THINKING THESE VIGILANT PARASITES.
~ Click To Enlarge ~
Since then, the national debt has surged from $200 billion to $17trillion – excluding $5 trillion of “off-balance sheet” debt held by Fannie Mae and Freddie Mac; whilst CPI inflation has exploded.

Of course, we all know the U.S., too, heavily understates its CPI – and thus, one can simply view the CRB Commodity Index, up 75% since the turn of the century, to see such inflation in action; let alone, the “dollar index” itself, which since peaking in 2001, has remained near historic lows despite the inevitable collapse of its largest components – the Euro and Yen… 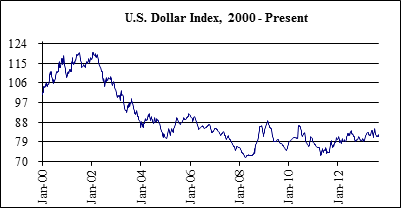 Make no mistake; the reason GLOBAL, PHYSICAL gold and silver demand is at ALL-TIME highs – getting stronger each year – is depicted as clear as day in the “currency analysis masterpiece” table above.

Just No Money Is Made During Peace Time.
Silver
Worldwide purchasing power is FREE FALLING as the Fed’s maniacal “QE4” program finishes off what’s left of the fraudulent fiat currency regime that has left the world on the precipice of World War III.

Trust me, it’s no “coincidence” people are rioting in Egypt, Turkey, and Brazil; or that similar fates await India, Indonesia, and many of the world’s other heavy population centers in the coming months – not to mention, basket cases like the European PIIGS when they inevitably secede from the ill-fated European Union.

British politician and the leader of the UK Independence Party (UKIP) Nigel Farage has slammed EU bosses over European crisis. “It’s even more serious than economics because if you rob people of their identity, if you rob them of their democracy, then all they are left with is nationalism and violence. I can only hope and pray that the Euro project is destroyed by the markets before that” – Farage said at the end of his speech. » If you read one article today, let it be this. If you pass on one article today, let it be this:
» This is an EXTREMELY important article about the Jewish assault on America.
» ONIONS! I had never heard this!!! PLEASE READ TO THE END: IMPORTANT
» HELLO FREEDOM - this is a MUST READ - the most important event of our time.
» Very Important To Read:"Dear Community Leader,,,"