OUT OF MIND » PLANET AWARENESS » ATMOSPHERIC CHANGES » Heavenly Signs!? Meteors Raining Down in 2013

Heavenly Signs!? Meteors Raining Down in 2013

Heavenly Signs!? Meteors Raining Down in 2013
By Hwaa Irfan

A slice of a pallasite meteorite fragment discovered in Argentina; on display at the Canadian Museum of Nature in Ottawa, Canada
Many of us are not aware or exposed to a significant increase in earth directed meteor hits this year, with reports of 300+ hits on the US soil alone last week. If our imaginations have not been claimed by Hollywood, the notion of alien attack is least likely to colour our perceptions of reality. But what is reality with the recent American Meteor Society, AMS installation of a reporting system on their website so that members of the public could report incidents. To date the AMS site has received reports of 2150+ events in 2013. In 2011 it was 500 bearing in mind their recently installed reporting system. 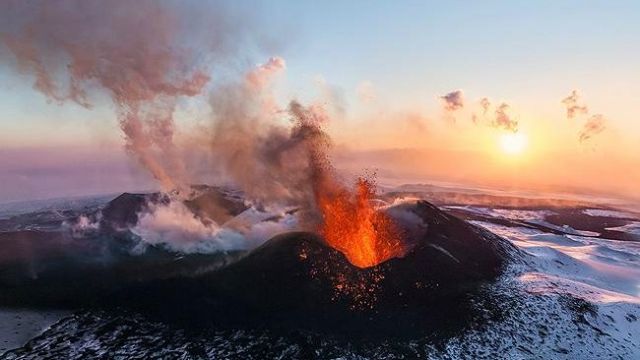 In 2012 a 10,000 ton meteor exploded above Chelyabinsk, Russia injuring 950 people, and other sightings have hailed from Italy, and Rome, with sporadic hits in Russia to Cuba, Japan. It seems rather ironic that two of the pivots of the NWO have been hit so dramatically.


With the crafting of modern science, many of us have inculcated the perception that we are the universe, i.e. enslaved to materialism which has become our own gods. We have separated from the universe, and cut the ties of the Laws of Nature i.e. God/Allah, without excepting the consequence that the current human dilemma that in that perceived isolation we are alone in that dilemma leaving us prey to mental and emotional instability. Yet here we are with meteors/shooting stars raining down in certain parts of our world.
Shooting stars we fondly refer to when at a distance are not stars but meteorites that glow when enter the atmosphere of the Earth. We relegate them, as desired by the cabal’s modern science to:

… fragments from comets or asteroids, while others are collision impact debris ejected from bodies such as the Moon or Mars.
The visible streak of light from space debris is the result of heat as it enters a planet’s atmosphere, and the trail of glowing particles that it sheds in its wake is called a meteor, or colloquially a “shooting star” or “falling star”. A series of many meteors appearing seconds or minutes apart, and appearing to originate from the same fixed point in the sky, is called a meteor shower. – Wiipedia

As Darris McNeely reminds us:

Really what this is is a wakeup call in terms of understanding that we live within the forces of nature, and they are very powerful, and they are very strong. The earth is designed by God to basically shelter us from the worst ravages that could come about. It makes good science fiction, but illustrations like this show us just how close at times we are and just how powerful nature is.

Just hours after Pope Benedict XVI announced his resignation Feb. 11, lightning struck the top of the St. Peter’s Basilica at the Vatican.

{And we have, (from of old), adorned the lowest heaven with Lamps, and We have made such (Lamps) (as) missiles to drive away the Evil Ones, and have prepared for them the Penalty of the Blazing Fire.} Qur’an 67: 5

Biblical account refers to God raining ‘fire and brimstone’ on the cities of Sodom and Gomorrah, which occurred around 1400 BC.

“And it came about as they fled from before Israel, while they were at the descent of Beth-horon, that the Lord threw large stones from heaven on them as far as Azekah, and they died: there were more who died from the hailstones than those whom the sons of Israel killed with the sword. – Joshua 10, verses 11-14
{If Allah touch thee with affliction none can remove it but He; if He touch thee with happiness He hath power over all things.} Qur’an 6:17

Let us not forget that meteors introduce to our Earth precious metals like gold which was not part of our Earth’s geological structure. So on two levels, these significant upshot earth directed meteors is to remind us of our pace in the universe, and to prepare us for the new. Hopefully we can process rid ourselves of our emotional garbage first, so we and our Earth can benefit the whole of mankind and not the selected few without carving a path to our own self destruction!

Related Topics:
And He Shows Us His Signs!
Heavenly Signs: We are a Part of the Universe
What Frequency Am I Traveling on Right Now?
Aligning with the Universal Changes: Your Mind
Labour Pains of a New Worldview

OUT OF MIND » PLANET AWARENESS » ATMOSPHERIC CHANGES » Heavenly Signs!? Meteors Raining Down in 2013