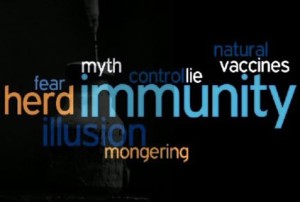 [/font][/color]
3rd October 2013
By Dave Mihalovic
Guest Writer for Wake Up World
A summary review of data on neurological adverse events and the historical role of vaccination in the natural course of infectious disease in Switzerland and Germany, supports data from other regions with evidence that vaccines had no positive impact on disease prevention efforts from the early-mid to late 20th century. The data contradicts widespread misinformation campaigns by the mainstream medical establishment which claim that vaccination led to immunization and a subsequent decline in infectious disease.
The review supports other data around the world and mounting evidence that vaccine effectiveness is unproven, unjustified and lacking evidence-based medicine. The report was authored by the Department of Paediatric Rehabilitation of the Medical University of Bialystok, Poland and published in Progress in Health Sciences, a division of The International Journal of Health Sciences.
There is now mass awareness on the dangers of vaccination, and only education into the statistical reality of historical immunization efforts and their failures over the last century can validate the growing controversy regarding vaccine effectiveness.

A brilliant report in 1977 by McKinlay JB and McKinlay SM questioned “the contribution of medical measures to the decline of mortality in the United States in the twentieth century” [Mem Fund Q Health Soc. 1977 Summer; 55(3): 405-28].
Now two centuries of UK, USA and Australian official death statistics have shown conclusively and scientifically that modern medicine is not responsible for – and played little part in – substantially improved life expectancy and survival rates from disease in western economies.
Historically, vaccines have not been viewed as inherently toxic by their regulatory agencies. The resulting lack of evidence of causality between vaccinations and serious adverse outcomes has thus been filled with an assumption that vaccines are safe.
The Truth Behind the Data
Based on statistics from the Federal Statistics Office in Wiesbaden, Buchwald published a paper containing long-term observations of morbidity and mortality from infectious diseases. The following charts present the collected data indicating the year of introduction of the vaccines. 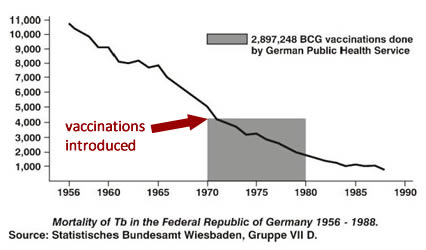 [url][/url]
Tuberculosis mortality in the Federal Republic of Germany (FRG) in the years 1956-1988.
Shaded area = the number of BCG vaccinations performed. Note the decline from 1956 to 1970 without any vaccination schedule. (Source: Deggeller L.:Concerning Childhood Vaccinations Today. Journal of Anthrop Med, 1992, 9, 2,1-14) 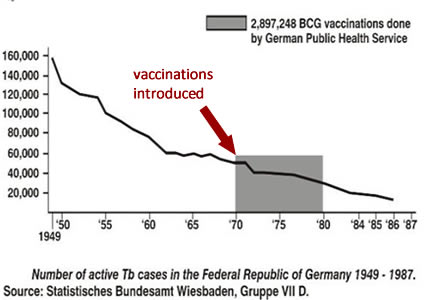 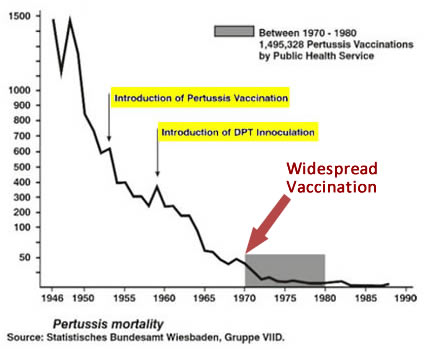 Pertussis mortality. The arrows mark the year of introduction of the pertussis and DTP vaccines.
Shaded area = the number of vaccinations performed. Note the declines already in place before either the pertussis or DPT vaccine schedules were introduced. (Source: Deggeller L. Concerning Childhood Vaccinations Today. Journal of Anthrop Med, 1992, 9, 2,1-14; with permission: Phycicians’ Association for Anthroposophical Medicine) 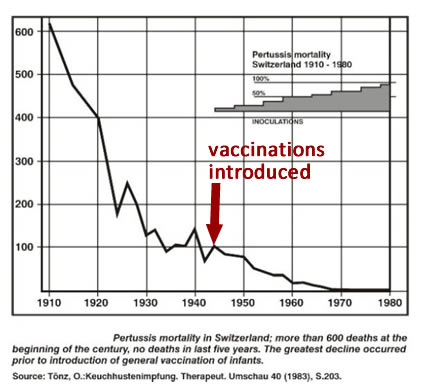 Pertussis mortality in Switzerland in the years 1910-1980.
Shaded area = introduction of vaccination. The greatest decline occurred prior to the introduction of general vaccination of infants. (Source: Deggeller L. Concerning childhood vaccinations today. Journal of Anthrop Med, 1992, 9, 2,1-14)

Shaded area = the number of vaccinations performed. Note decline before widespread vaccination. (Source: Deggeller L.:Concerning Childhood Vaccinations Today. Journal of Anthrop Med, 1992, 9, 2,1-14.
It is interesting that in recent decades, a decrease in infectious disease rates was generally reported, each of which took place before the introduction of inoculations against these diseases.
What caused the decline in disease rates?
According to a 2002 report from Lancet Infectious Disease, the weight of evidence collectively suggests that personal and environmental hygiene reduces the spread of infection and thus, results from this review demonstrate that there is a continued, measurable, positive effect of personal and community hygiene on infectious. The same report showed that the crude death rate from infectious diseases decreased to nearly negligible levels long before introduction of universal vaccination practices.
Furthermore, the remarkable successes of cities in England in substantially reducing smallpox mortality rates compared to other countries was achieved by abandoning vaccination between 1882 and 1908.
In the graphs below, notice the large numbers of deaths caused by the smallpox vaccine itself. By 1901 in the UK, more people died from the smallpox vaccination than from smallpox itself. The severity of the disease diminished with improved living standards, and was not vanquished by vaccination as the medical “consensus” view tells us. Any vaccine which takes 100 years to “work” is simply not. On any scientific analysis of the history and data, crediting smallpox vaccine for the decline in smallpox appears misplaced. 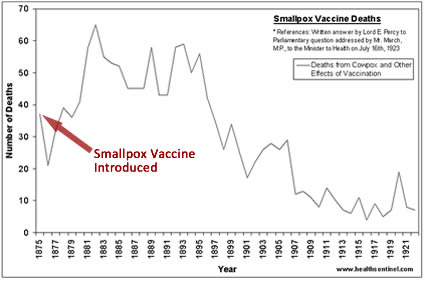 UK Deaths Caused by Smallpox Vaccination 1875 to 1922 — Published: Roman Bystrianyk
When during 1880-1908 the City of Leicester in England reduced vaccination rates compared to the rest of the UK and elsewhere, its survival rates soared and smallpox death rates plummetted [see table below]. Leicester’s approach also cost far less. 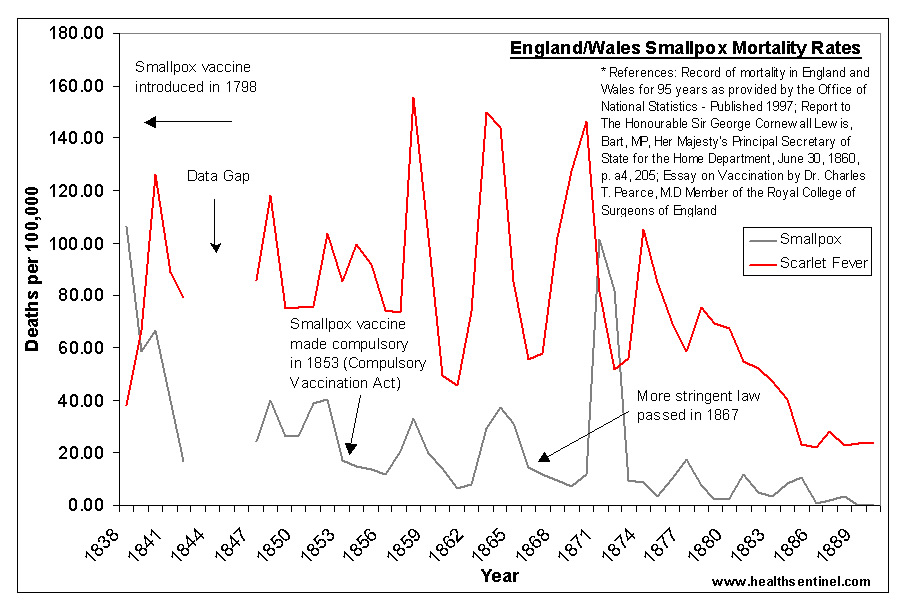 [url][/url]
UK Smallpox Mortality Rates Compared to Scarlet Fever 1838 to 1890 — Published: Roman Bystrianyk
Small-Pox Epidemics, Cost, and Fatality Rates Compared
The Effect?
Currently, “developed” countries are introducing increasingly complex childhood vaccination schedules. According to NVIC (National Vaccine Information Center) children in the United States are expected to receive 49 doses of 14 vaccines before the age of six.
And the effect? Doctors and researchers point to the worsening state of health of the child population since the 1960s, which coincided with increasingly introduced childhood vaccinations. Allergic diseases, asthma, autoimmune diseases, diabetes and many neurological dysfunctions – difficulty in learning, ADD (attention deficit disorder), ADHD (attention deficit hyperactivity disorder), seizures, and autism – are all chronic conditions to which attention has been brought.
Sources:

About the author:
Dave Mihalovic is a Naturopathic Doctor who specializes in vaccine research, cancer prevention and a natural approach to treatment.
Learn more at preventdisease.com
Join Wake Up World's Ever Evolving Social Communities
Facebook    Pinterest    Google Plus    Twitter
[color][font]

[/font][/color]
Please help support the evolution of WuW by shopping through our international Amazon links and receive up to 70% off on selected products. USA- Canada - France - Germany - UK
Thanks to: http://wakeup-world.com