Earth Shift: Underwater Landslides Taking Place*
While the crisis above ground seems to be multiplying, our Earth has its own agenda, or is it the same agenda?
To say it’s an awesome feeling to witness lands suddenly disappear in the vicinity in which one lives is an understatement, but what if the land is sliding under the sea. One feels well it doesn’t affect me or does it?
Experts can give us a clue, but one thing is sure, we cannot take nature for granted! 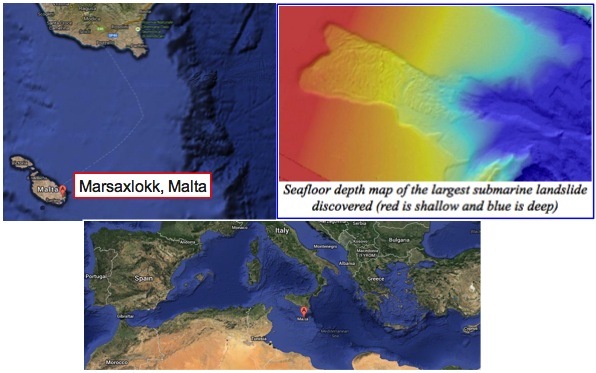 67 underwater landslides found off the Maltese Islands
A high concentration of submarine landslides have been documented from an area of 370 square km of seafloor in the north-east of Marsaxlokk. The discovery was made using advanced seafloor exploration techniques and was reported in a study led by Dr Aaron Micallef, a marine geologist at the Department of Physics, University of Malta.
The 67 submarine landslides have an area of some 18 km, which is equivalent to about five times the size of the island of Comino. They occur on very gentle slopes and have formed cliffs that are up to 50 m in height. Some of the landslides were powerful enough to erode through extensive rock walls.
The University said submarine landslides constitute a major hazard to seabed infrastructure, such as pipelines and cables, and are also a potential source of tsunamis.
Because of their relatively small size and low speed, the landslides discovered are not thought to constitute a significant or imminent tsunami hazard, although this can only be determined precisely once more detailed analyses are carried out.
This is not the first time that submarine landslides have been reported in the vicinity of the Maltese Islands. Submarine landslides are poorly understood processes, and there is an urgent need to map them, estimate the likelihood of their occurrence, and determine if they pose a risk to the Maltese Islands and the surrounding seabed infrastructure.
The study related to this discovery was presented at the biennial conference on “Submarine mass movements and their consequence” held in Kiel, Germany, and was funded by Eurofleets and Marie Curie Actions.
Underwater landslides and deep water corals have been discovered during an oceanographic expedition exploring submarine canyons in the central Mediterranean Sea.
The CUMECS expedition has recently completed a survey of a number of submarine canyons, large valleys on the seafloor, located to the east of the Maltese Islands.
Using state-of-the-art technology on board the Italian research vessel Urania, scientists discovered numerous submarine landslides, some of which are as large as 5,000 football pitches.
Since submarine landslides are a known geohazard, the scientists have collected seafloor samples to understand the how and when these landslides occurred.
The Mediterranean coastline of Algeria will find more than tsunami worries as they will have a loss of elevation by 12 feet or more. Their coastline is not part of the African Plate. What sinks and what continues to float on the magma beneath is a factor of the rock density, and the floor of the Mediterranean above Algeria has only been floating as it has due to the connection with the African Plate. Elsewhere, where the Mediterranean floor spreads during the roll, the floor is either too deep for a change to be noticed or at a distance from the plate border.

The roll will incite the Arabian Plate to roll also, to some degree, as across from Egypt there will be pressure, but further down the Red Sea there will be a tearing apart, inviting the Arabian Plate to migrate in this direction. However, this is not the disaster we have predicted for Iraq, not yet. Nor will the Afar Triangle, the African Rift Valley, experience changes all that dramatic during this roll.
As has been noted by the tearing Internet cables at Kenya and the Red Sea, the eastern top of Africa is dropping while western top of the African Plate is holding. Africa will tilt toward the east as it drops, as we have explained. What this does for Tunisia is pull some of the land along the border with the Mediterranean Plate down. This is an uneven drop, as the thickness of the plate is not even, so that some parts may lose elevation while others continue to float at their current level.
Source*