OUT OF MIND » PERCEPTUAL AWARENESS » THE SHIFT IN CONSCIOUSNESS » HOW REHYPOTHECATION OF COLLATERAL WORKS....

HOW REHYPOTHECATION OF COLLATERAL WORKS.... 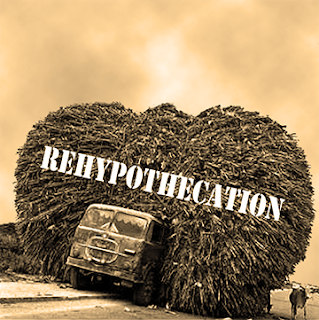 “The practice by banks and brokers of using, for their own purposes, assets that have been posted as collateral by their clients. Clients who permit rehypothecation of their collateral may be compensated either through a lower cost of borrowing or a rebate on fees.

In a typical example of rehypothecation, securities that have been posted with a prime brokerage as collateral by a hedge fund are used by the brokerage to back its own transactions and trades. While rehypothecation was a common practice until 2007, hedge funds became much more wary about it in the wake of the Lehman Brothers collapse and subsequent credit crunch in 2008-09.

In the United States, rehypothecation of collateral by broker-dealers is limited to 140% of the loan amount to a client, under Rule 15c3-3 of the SEC.”

Well, now that it is clear, isn’t it? Still need a better explanation, watch the video Rehypothecation.

Look at the practice as a giant musical chairs orchestra, conducting a continuous symphony. As long as the tune plays, the multi pledged collateral is safe from foreclosure.

Consider that the entire fiat paper financial system is based upon a promise to pay. The original capital plus the interest juice is incorporated within the pledge from the borrower to the lender. However, in the real world only the super privileged and connected negotiate market rate or below, loans without collateral. For the rest of the garden-variety beggars that need to go hat in hand to scrounge money, they had better be willing to put up security for the note obligation.

In the realm of high finance the rules for swinging deals takes on surreal implications when leveraging, gearing and syndication pooling share the risk by pledging security instruments to gain loan approval.

The complications are that such guarantees often do not hold unencumbered rights to the underlying security. Obtaining insurance coverage to warrant the value of the collateral is one way to satisfy the lender. Add to this expose the practice of re-insurance when the original underwriter books out their portions of the default risk to another more daring insurer.

While the security industry rules limit the percentage of rehypothecation, do not forget this is the same fraternity that invented the practices of derivatives and swaps.


"The rules are contained within new margin requirements for uncleared derivatives, the final version of which was published on September 2 by the Working Group on Margining Requirements (WGMR), a body run jointly by the Basel Committee on Banking Supervision and the International Organization of Securities Commissions. The decision to allow strictly limited rehypothecation of customer assets comes after the WGMR initially appeared to rule the practice out in its first July 2012 consultation document. A subsequent February 2013 ‘near-final' paper asked whether some rehypothecation should be allowed with strict controls, but the latest iteration of the rules is the first time the conditions for rehypothecation have been fleshed out in detail.

The WGMR stipulates that customer assets collected as initial margin on uncleared derivatives trades can only be rehypothecated to a third party to hedge the dealer's derivatives position arising out of transactions with customers for which initial margin was posted. This collateral can only be rehypothecated once – so, the third party would not be able to re-use the assets again.

Any rehypothecated initial margin must be treated as customer collateral and segregated from proprietary assets – a condition that extends to the third party after rehypothecation. Crucially, the customer must also be protected from the risk of loss of initial margin in the event the dealer or third party, or both, collapse."


Do you really believe that any set of rules will prevent the security brotherhood from comingling customer funds? Maybe putting Jon Corzine, the MF Global Holdings guru in charge of regulation enforcement would bring clarity to a complex system of double-dealing.

Sure, such an expert on circumventing the law would be the optimum sheriff to round up the rehypothecation bandits. Well, just understand the significance that the lawyers and barristers acknowledge, in the WGMR report.


"Cash is fully fungible, making it difficult to segregate from other assets, lawyers point out. Full title to the cash is given to the dealer, and all the customer has is a contractual claim for repayment of an equal amount of cash, meaning it would effectively rank as an unsecured creditor in the event of a default. In contrast, securities posted as collateral under a security interest arrangement can be segregated and traceable."

Oh golly, the smoking gun verbalized by the officers of the court . . .

The depositor relinquishes their ownership of funds to the security dealer. When the music is over, turn out the lights. Maybe the message from the Jim Morrison’s song is a warning to investors and borrowers alike. Just close the door on the opaque scheme to overestimate the underlying value of collateral security.

When the only recourse to recoup your losses rests upon an unsecure creditor status in a bankruptcy, the capital formation of the economic system ceases to function. Conversely, before the borrower rejoices that the financial institution takes a mortal hit to their balance sheet, the collapse of liquidity brings hardship to the entire economy.

Common sense in banking is gone. Indemnity protection in securities is worthless. If left to the financial elites to rescue the paper monitory structure, the gnomes of default will just rehypothecate the entire system by claiming the same ownership, of all-collateral as the financial dealers take full title to your cash.

This is how you have become the unsecured creditor of your own assets. When You Wish Upon A Star, Anything your heart desires – REHYPOTHECATION - Will come to you.
James Hall – October 9, 2013

Subscribe to the BATR Realpolitik Newsletter Posted by Obi-Wan Kabuki at 3:33 AM

OUT OF MIND » PERCEPTUAL AWARENESS » THE SHIFT IN CONSCIOUSNESS » HOW REHYPOTHECATION OF COLLATERAL WORKS....