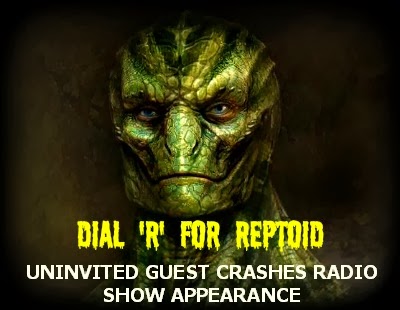 I recently received the following narrative from Matt R.:


I have appeared on two radio shows in the past 45 days: The Daniel Ott (8/24/13) show, and Joe Montaldo's ufo undercover (10/9/13). Both programs focused on the topic of my reptilian abductions, and how they related to my experiences on the NOPD during Katrina. In particular, these interviews addressed the mass abductions of police/military personnel that occurred around that time period. The purpose of these mass abductions was to help groups of reptilians train in methods of crowd control. I have spoken about these cases, at length, in a series of blog posts on the phantoms and monsters blog: ( http://tinyurl.com/kwaupvg http://tinyurl.com/lamcogr http://tinyurl.com/lrs4vd8 ). I have also engaged in several radio interviews on this topic, over the past few years.

The most recent one was just this past Wednesday. In this most current interview, Joe discussed some new info he has gleaned from some of the other abductees, in the mass abductions. One of the new testimonies is from an army colonel. And, it is now becoming clear that there were other mass crowd control training abductions in the pacific northwest. There is also the new disclosure that reptilians were practicing using individual mall stores as holding cells, by rolling down their individual shutter gates. Since the interview, an incident took place in moscow which has some notable parallels to the contingency plan I was involved in. http://rt.com/news/moscow-nationalists-killing-violence-142/. The initial flash point of this riot was a shopping center. When the police lost control, they were forced to initialize a previously unknown secret plan known as “volcano”. This demonstrates how critical it is to not allow malls/shopping centers to be taken over, if any authority wants to maintain order.

Recently, a disturbing new trend has entered into my interviews. Towards the end of the past 2 programs, there have been vivid intrusions of inhuman vocalizations. The origin of these in both programs is unknown,but they are strongly reminiscent of what I have heard from reptilians in my abductions. On Wednesday's show, Joe Montaldo discussed his detailed audio analysis of the Daniel Ott show growl incident. It concluded that it was a third party who barged into our Skype conversation. Then, less than 30 mins after we started talking about this topic, another incident happened within Mr. Montaldo's show!

In this new instance, it was nearly 45 seconds of sharp growling noises, from what sounded like a younger reptilian. As numerous reptilian abductees have noted, young reptilians are quite shrill and feral. Even the adolescent ones have something of a wild streak, and can be quite aggressive. I believe I have been visited by one once before, when I had a 5 foot rep let out an angry hiss at me. This was in response to me waking in the night, and sitting up in bed. It sounded viscerally scared, and quite small in stature. Based on the sound, it couldn't have been over 5 ft tall, or 100 pounds.

The younger reptilian seems to have been patched into this show by another reptilian, who would likely have been an adult. You can hear the younger reptilian growling too early in the distorted "phase in" part of its entrance, as if it didnt realize the hacking process was fully initialized. Then, at the end, it is cut off mid growl. Its higher pitched barks and growls in between are extremely chaotic , and somewhat immature sounding. It is as if it is intentionally playing around, before the older reptilian manning the controls cuts it off suddenly. Its a stark contrast to the mature angry rumble of that large sounding reptilian on the Daniel Ott show.

Why patch in a young reptilian at all? Over the past 2 months, I have had an unusual intuitive sense that I would learn new info in regards to my participation in hybrid breeding. Specifically, about the several half reptilian offspring that have been cultivated from my DNA. Ive been aware of this fact for at least 6 yrs, but intentionally avoided speaking about this.It is a really difficult topic to deal with. I was hoping to clearly recall face to face contact with at least one of these offspring, before mentioning it at all. Being that my abductions seemed to start in 2003, the oldest of these hybrids would be 10 by now. I need to make clear the fact that I don't get many of these intuitive premonitions. But, the few times I do, they tend to be very accurate. The only times I've gotten clear psychic communication from reptilians is when I am standing in eyesight of one. I can only surmise that I must have had a recent abduction, during which I was reminded of these hybrids.

Or perhaps, I met one recently, only to forget? For the 5 alien interaction incidents I recall clearly, I can only imagine how many others have yet to surface to conscious memory. My view is that this reptilian was either one of my hybrid offspring, or a reptilian of a similar age meant to remind me that these offspring exist. Based on what numerous other reptilian abductees have seen many reptilian hybrids tend to look a bit similar to the "Cardassian" race on Star Trek. They have flatter, near non-existent muzzles, and sometimes a human like head of hair. Here is an example, commissioned by an abductee through the ufo artist Kesara http://tinypic.com/r/2lv06d5/5. Their skin texture is like a median mix of reptilian, and human. Some of them have been seen to pass for human in public, under heavy clothing, hats, sunglasses etc. Even some varieties of "men in black" have fit in this category.

This soundcloud file, https://soundcloud.com/panamaorange/reptiliangrowlincidents, contains both of these growl incidents, merged into one segment. 0:00 to 1:24 is the Joe Montaldo program incident, and 1:25 to 2:47 is the Daniel Ott show program growl occurrence. Note: the growling is extremely vivid, and quite disturbing, between the 0:20 and 0:30 mark.

And here are links to both radio interviews, in their entirety:
The 10/9/13 Joe Montaldo UFO Undercover show ( http://paranormalradionetwork.org/2013/10/09/ufo-undercover-guest-matt-x-new-orleans-police-officer-abducted-by-reptilians-10-09-13.aspx https://soundcloud.com/uprn/ufo-undercover-matt-x-new )
The 8/24/13 Daniel Ott show : ( http://www.theedgeam.com/interviews/Matt_R_08.24.13.mp3
http://www.theedgeam.com/interviews/recaps/GROWL.mp3 )

As a side note, a major indie rock band just released a promo video concerning reptilians, and their ability to supersede the NSA http://www.buzzfeed.com/verymuchso/mgmt-album-trailer. No comment necessary.

I can be contacted at circlepanama@gmail.com

NOTE: I do not endorse or impugn any of the narrative posted by the author. It has been presented solely as the opinion of the author, without any input by myself (unless I was quoted). The narrative has been published, as received, without any edits. I will state that I believe that there are other humanoid beings living among us, either alien species or entities bio-engineered from terrestrial lifeforms. Beyond my statement you are left to your own conclusions...Lon

The Secret History of the Reptilians: The Pervasive Presence of the Serpent in Human History, Religion and Alien Mythos

Children of the Matrix: How an Interdimensional Race has Controlled the World for Thousands of Years-and Still Does

A New Order Of The Ages: Volume One: A Metaphysical Blueprint Of Reality And An Exposé On Powerful Reptilian/Aryan Bloodlines

Flying Serpents and Dragons: The Story of Mankind's Reptilian Past

Click here for this week's entertaining podcast
Add 'Beyond The Edge' Radio to your playlist!